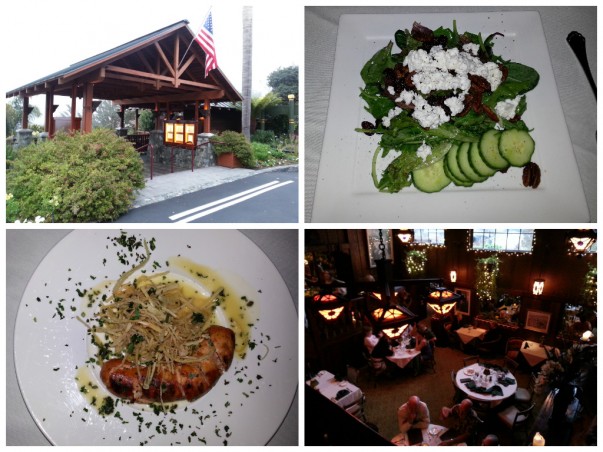 Dinner at Shadowbrook, in Capitola, is not an undertaking to be, uh, undertaken lightly. It’s a big deal – expensive, sprawling, and really, really good. It is going to take a long time, involve some fairly complex logistics, and so on, but man, is it worth it. One of the best restaurant experiences in the Santa Cruz area, it is. And the most interesting.

The current incarnation of Shadowbrook is a combination of a cable car, a winding path, a garden and a rambling, multi-room restaurant built into the side of a steep hill overlooking Soquel Creek. The setting is lovely – we were there on a foggy evening, and it simply made the place seem cozier and more intimate.

The history of Shadowbrook is fascinating. It began as a log cabin in the 1920s, and over the years has been a tea room, restaurant, gambling parlor and many other things. The main theme of the place is romance, which typically spells doom for a restaurant, but in fact, Shadowbrook carries it off really well. It is romantic. The complete story can be found on the restaurant’s web site, and it’s legitimately compelling, full of twists and turns, history and big personalities.

About the cable car. The parking lot for Shadowbrook is on top of the hill, and the restaurant itself is at the bottom. The hill is steep – like, seriously steep. So (and again, the details are all on the restaurant’s web site) to get to the restaurant, you can climb into this bright-red little cable car, about the size of a couple of phone booths, and you are slowly lowered down an incline to the level of the restaurant. It sounds hokey, but it’s kind of fun. And it’s especially convenient after your meal, when you will be so stuffed that the idea of climbing back up a steep hill will be VERY unappealing

One more really nice thing about Shadowbrook is that they have a dress code. People do not show up here in jeans and t-shirts. I think that’s a really good thing.

Shadowbrook is in Capitola, on a hill overlooking the city. There are several private parking lots specifically serving the restaurant, so parking isn’t a problem.

This is a destination restaurant. It covers about an acre of land, so the ambience includes gardens, the cable car, and I’m guessing at least eight different seating areas, plus the bar. This place is big. It’s impossible to summarize except that it’s a kind of combination of slightly rustic, luxurious and very, very comfortable. Also kind of dark. But, with all that in mind, you can select any kind of ambience you want.

Overall, however, the place reminds me of one of those old-fashioned, expense-account steak places, such as Peter Luger’s in Brooklyn, or Harris Ranch in San Francisco. Immense portions, lots of booze, expensive, somewhat old-fashioned décor and about a trillion calories. Shadowbrook would not have been out of place twenty years ago.

Great. Friendly, fast, and expert. The waiter even crumbed our table, which is really nice. They know what they’re doing.

Expensive. Dinner for two, including drinks, dessert, appetizers and entrée, came to $200, including tip. Worth every dime.

Wonderful, but also not for dainty eaters. This is not nouvelle cuisine, or anything like it. It’s sit-down-and-hold-on dinner, with large portions. This is rich food – abandon your diet for the evening if you plan to eat here. They serve a lot of big steaks here -- it’s that kind of place. Oh, and they also only serve dinner, which ought to give you a clue.

After we arrived (with no reservations, on a busy Saturday night) we waited at the bar for about fifteen minutes. Great bartender, fast service, and although we had to use one of those remote-control dinguses that flashes a light to tell us when our table was ready, they actually came and got us when the time came, which was a nice touch.

Because it was kind of chilly out, we opted to eat inside, so we were shown to a nice little two-top near the waiters’ station, which was fun, because we got to see all the operational action. For example, one of the waitresses was wearing a skintight miniskirt that she was both too old and a little too large for, so every entrance onto the floor was preceded by very entertaining, self-conscious adjustment of her outfit.

For appetizers, we began with seafood sausage, which was something completely new to me, and which worked. This, I suspect, was an attempt to use up the leftover and/or unordered seafood from the previous day in the kitchen (remember, Shadowbrook is only about a mile from Monterey Bay) but it was really nice – not too heavy, and nicely seasoned. The other ordered appetizer was a beautifully executed garden salad – fresh greens, cucumber, dried cherries, candied pecans, Champagne vinaigrette and goat cheese to balance everything out. Really nice, extremely fresh, perfectly balanced and just the right size.

One entrée was filet mignon brochettes & black truffle gnocchi. It was amazing – possibly the best gnocchi I’ve ever had. A lot, perhaps almost all, gnocchi isn’t really very good. It’s either too doughy, rubbery, or just has a kind of unpleasant texture. These were amazing – light, fluffy, and delicious. The brochettes were flawless as well.

The other entrée was a bison rib-eye steak – served with smoked heirloom tomato-sherry ragout, roasted garlic and thyme potato pie, grilled balsamic-glazed, bacon-wrapped radicchio. This is a seriously expensive entrée – around $50 – and is a large piece of red meat, along with two rich sides. It was glorious. The bison, which can be dry and kind of tough (like venison) if overdone, was perfect, and the sides were expertly done as well.

Dessert was at an equally high level. Along with a pot of French press coffee, we ordered a fruit pie, which was served with a homemade vanilla ice cream, along with a classic American cheesecake, served with mixed berries. By this time, we were in something of a food coma, but the desserts were terrific as well.

Last week I wrote about a place called the California Café, in Los Gatos. Although the food there was good, the restaurant itself was corporate, heavily marketed, and really impersonal. Shadowbrook is the exact opposite. This is a real restaurant, run by real people, and the food is fantastic. Like the California Café, they rely heavily on local produce, but unlike their competitor down the road, they don’t make a big deal about it or deliver a speech. They just deliver incredible food, and a wonderful evening. Highly recommended.