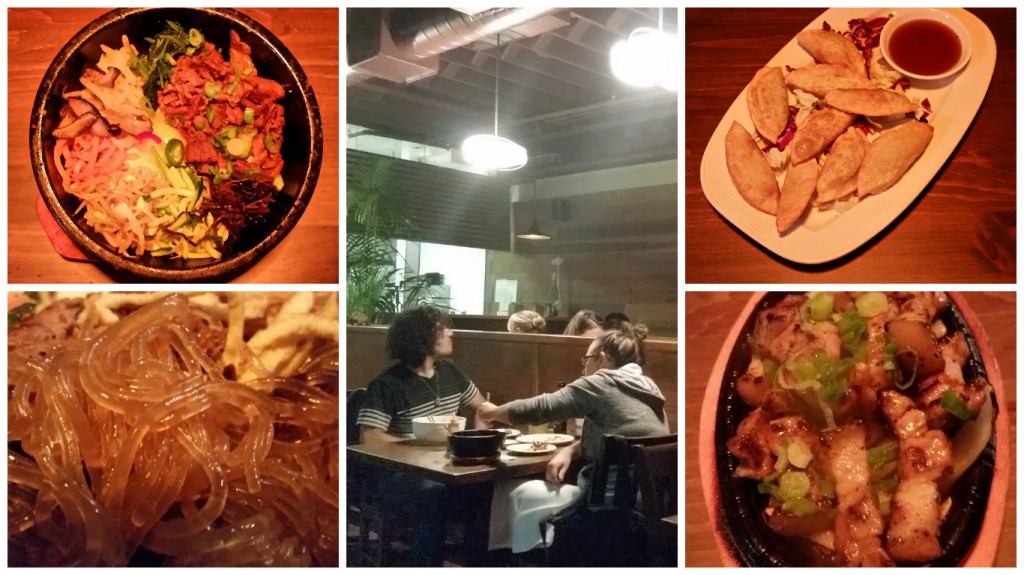 This place is great. The food is great, the location is super-convenient, and the service could not have been better or more attentive, without being obtrusive. Plus, they put a nice, interesting twist on a lot of conventional Korean dishes.

Santa Cruz has lacked a Korean place for years. For a small city, there’s everything else here – French, Chinese, Greek, even Sri Lankan. But no Korean. With the arrival of Sesame, that’s changed, and the staff clearly have modified traditional Korean cooking to suit a Western environment. This is all to the good – they’ve done away with, for example, the enormous array of side dishes that often come with a main course, while respecting and maintaining the format of the basic dish itself.

Sesame is in the same small plaza off of Front Street as the Surfrider Café. It replaces a Greek restaurant rather unimaginatively named “The Greek” which is now gone. There’s a parking lot right there, with a limited number of spots and a lot of use, so be prepared to utilize one of the municipal garages nearby which are big, cheap and convenient. Parking for dinner should cost, say, two dollars.
Address: 435 Front St, Santa Cruz, CA 95060
Phone: (831) 429-5555

Quiet and calm. The décor is minimalist and tasteful, with the use of a lot of simple, plain wood – really nice.

Outstanding. Polite, fast and expert, with just the right amount of warmth.

Expensive -- $100 for dinner for two, including drinks (but no dessert). The portions are large – this is hearty food.

The food is terrific, done in classic Korean style, with some modern adaptations.
As an appetizer we started with mandu, which seems to be a kind of Korean variant on Japanese gyoza. These are deep-fried dumplings, with beef, chicken and veggie filling. Unlike a lot of similar efforts, these were light, crisp and served piping hot – nothing greasy or heavy about them. They were delicious, and vanished in about one minute. The other appetizer was a dish described as “pork belly bites” which consisted of bites of pork, grilled and sauced. As with the mandu, this arrived very hot and fresh, and was also great.

One entrée was the Korean classic, bimimbap, in the classic dolsat stone pot, with the requisite egg. In case you’re not familiar with this amazing dish, it consists of pork, along with a number of ingredients, including rice, veggies, and a whole array of Korean condiments, served in a stone pot that’s been sitting in the oven until it’s really, really hot. The heat of the stone cooks everything, crisps the rice, and cooks the egg. This is hearty, solid food for working people, and it’s absolutely delicious. It’s one of my favorites, and in this department, Sesame did not let me down. Combined with a beer, or two, or three, it was heaven on earth.

The other entrée was jopchae, which is a kind of Korean equivalent of glass noodles. The base for these is sweet potato, and they’re stir-fried along with a mixture of carrots, onion, spinach and mushrooms, along with, in this case, beef and soy sauce. The resulting dish is a wonderful mixture of delicate, sweet noodles, savory beef, and fresh vegetables for balance. It’s amazing, and a lot more substantial than it looks, given the texture and translucent nature of the noodles.

Rather than dessert, we finished the meal off with a shared bottle of soju, the traditional rice wine of Korean. The stuff is only 18% alcohol, but it packs a serious wallop, and let’s just say the evening went sideways, as did part of the next morning. Fun gone badly wrong, one might say, and definitely not recommended. But everything else about Sesame is. A lovely modern, California twist on traditional Korean cooking that was a definite hit.