The city of Memphis sits on the Mississippi River, kind of where the three states of Tennessee, Mississippi and Arkansas all come together. It’s famous for music, being one of… 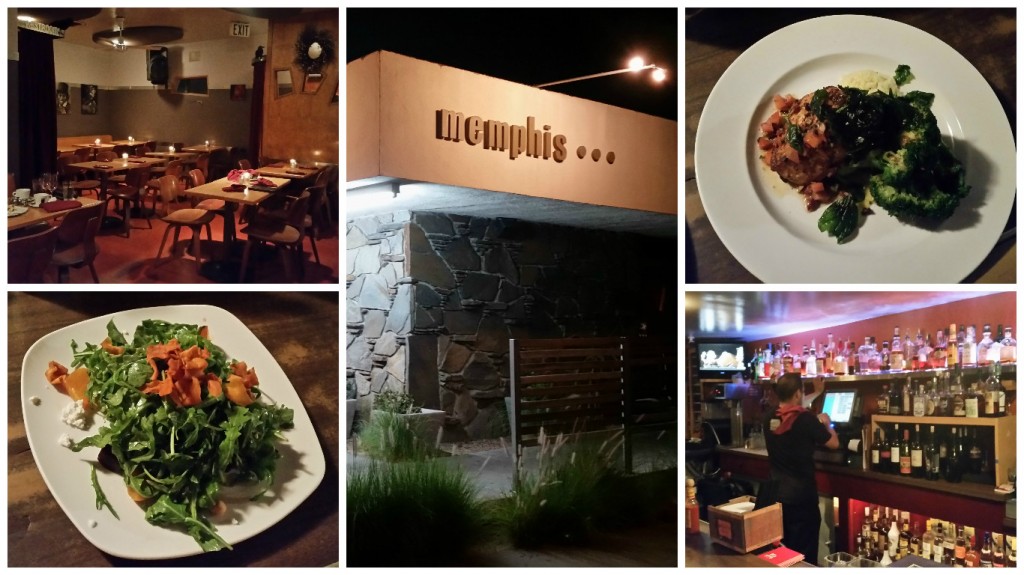 Memphis Cafe is in the middle of Costa Mesa, a part of Orange County in Southern California

The city of Memphis sits on the Mississippi River, kind of where the three states of Tennessee, Mississippi and Arkansas all come together. It’s famous for music, being one of the classic cities of the deep South, and the list of stars who got their start in Memphis is mind-bending — Aretha Franklin, Jerry Lee Lewis, Johnny Cash, Elvis Presley, Carl Perkins, Roy Orbison, Booker T. & the M.G.’s, Otis Redding, Isaac Hayes, Shawn Lane, Sam & Dave and B.B. King. The all got started in Memphis and, of course, Elvis Presley’s Graceland is there, too.

Memphis Café is a nod to this incredibly rich heritage, but also sort of an anomaly. It’s right smack in the middle of Costa Mesa, a part of Orange County in Southern California. Orange County is a notoriously sterile, suburban region, and this area of Costa Mesa is no exception. Given that it’s near the airport, it’s also kind of industrial and gritty. The restaurants in the area tend to be either bland chain restaurants or sort of corporate expense account places. None of these are too exciting.

Memphis Café is a really nice exception to this trend. Although it’s a little hard to get there, it’s small, cool and serves great food. Also, they do not overdo the soul food concept. Costa Mesa isn’t that far from Disneyland, and it’s completely plausible that a place like this would Disney itself up until it was one part restaurant, one part sales environment. Thankfully, that doesn’t happen. What happens instead is a charming, expertly run little bistro that begins with a soul food them, but picks, chooses, and does very well.

Five minutes from John Wayne airport, in an utterly nondescript part of Costa Mesa, the Memphis Café has a parking lot, so there’s no need to worry about that.
Address: 2920 Bristol Street, Costa Mesa, California 92626
Phone: (714) 432-7685

Monday – Tuesday: 8:00 – 22:00; Wednesday: 8:00 – 1:00; Thursday – Saturday: 8:00 – 2:00; Sunday: 8:00 – 21:30 pm
The Ambiance: Funky, dark, retro, nice. The theme seems to be late Fifties/early Sixties California suburban, so there are polygon windows, wooden chairs and tables from that period, and a tile floor with cool black-and-white pictures on the walls. Think of the Oracles’ apartment from The Matrix, and you’ve kind of got the look. It’s a pretty small place, so you may have to thread your way through some tables, but it works.

Great. The menu is pretty straightforward, and although I sat at the bar, so I would watch the World Series, the bartender was right on top of the situation, and everything worked out nicely.

Moderate. $48 for two beers and dinner, no dessert. The portions are reasonable – not wildly generous, but not teeny, either.

Very good, and not at all what it appears.

Actual, genuine, real Southern food is awful. Everything is either deep fried or cooked into submission, there’s a lot of grease, lard and crap, and forget getting anything like a salad. Barbecue, for instance, is good occasionally, but as a way of life it will either kill you outright or turn you into a whale, neither of which is a good outcome. The Memphis café starts with soul food concepts, but then makes them contemporary and much, much better.

The first appetizer was a nicely balanced beet salad. Dressed in a healthy portion of lettuce, this featured two kinds of beet, goat cheese, hazelnuts and a roasted garlic vinaigrette. This was a great start to the meal – everything was fresh, and by the way, was dished up amazingly quickly. Like, within seconds. Great start.

For an entrée, I selected the special, which was a seared Ahi tuna with a simple risotto, and grilled broccoli. This was great, and definitely not Southern – it was kind of healthy, which rules that cuisine out. The tuna was properly done – seared on the outside, but rare on the inside. The broccoli was halved and grilled, and the risotto was good without being too heavy or gloppy. All in all, a nice meal, and best of all, done without a lot of fanfare.

The Memphis Café has figured out what works, and figured out how to do it well, and consistently – they’ve been there for twenty years. There’s a reason – it’s good! Try it.