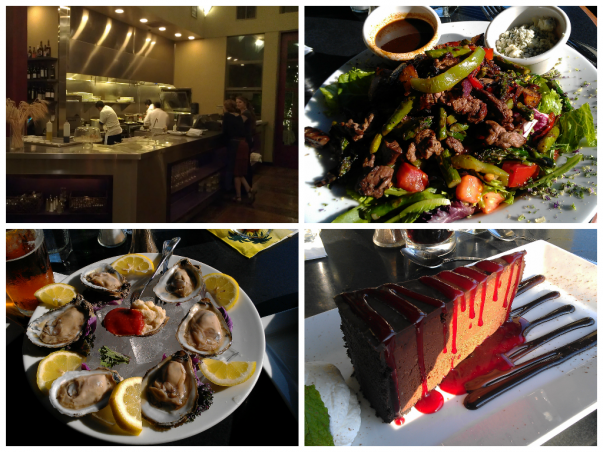 I hardly know where to begin to review the Paradise Beach Grille, in Capitola. To say that it was bad is an understatement. It was bad in a way that’s immoral, that left me feeling as though I had been swindled by someone who was very good at it – had years of practice. It’s sort of similar to the feeling you get when you receive a cell phone invoice or a hotel bill, and discover that there are all kinds of unpleasant additional charges attached, which they hadn’t told you about.

Bottom line: Don’t eat here unless you are suffering from severe malnutrition, and perhaps not even then.

First, some background: Capitola is a pretty little resort town just south of Santa Cruz. It’s right on the beach, and consists of a little pocket of winding streets, which are stuffed full of the usual bars, restaurants, vacation clothing shops, ice cream places and so on. On one of these streets is a restaurant with a nice façade – the Paradise Beach Grille.

The location is great, and the décor is nice. Sort of Tuscan-meets-California. We sat in the rear of the dining area, with open windows facing the beach, and the ocean. Exceptionally pretty view. That, however, is where the fun stops. The agony begins when you get beyond the view, and the setting, and actually dine at this place.

The Paradise Beach Grille is right in the middle of downtown Capitola, on the beach and within sight of the Venetian homes and the wharf. Although the location is really nice, parking is a major pain in the neck, particularly during the tourist season. Accordingly, it makes sense to park in one of the metered lots above the town, and walk down into the town itself.

First of all, we had dinner on the Third of July, the evening before a big American holiday. This may have affected things, but the place was filled with two kinds of patrons. The first was loudly dressed, overweight middle-aged Californians in Hawaiian shirts and shorts, busily and noisily standing around and getting drunk. The second was senior citizens dressed in resort wear, sitting at the bar and quietly getting drunk. Despite the bright sun, the blue sky, and the proximity of the ocean, being around these two groups was depressing.

The service was slow, and kind of challenging. This seemed to be because the restaurant had not booked or hired enough staff. There was one server for the entire back room, plus part of the main room, who had to thread her way through the drunken throngs (some of whom were semi-groping her every time she passed) to get to us. In addition to being harassed by drunks and overworked, our server also seemed kind of rattled – one of her first acts was to spill the tray carrying our drinks all over the floor, and all over us.

Not cheap. Dinner for two, including drinks and dessert, came to around $100, which meant that including tip, the total bill for this puppet show came to over $120.

The food – ah, yes, the food. The food is where the feeling of being cheated really comes from. To sum it all up, as we were leaving, I looked at my companion, and said “I’ve had better food at airports.” Without missing a beat, she replied: “I’ve had better food on airplanes.” We were both right.

The experience reminded me of a passage from Antony Bourdain’s classic book Kitchen Confidential, where he describes being a chef at the Rainbow Room in New York. In that role, his job was to recycle– to turn uneaten food from a previous meal into the ingredients for the next one. Here’s the quote:

I’d begin each morning at seven thirty, pushing a little cart with wobbly casters down the line, where the cooks would hurl hunks of roast pork, end cuts, crocks of cooked beans, overcooked pasta, blanched vegetables and remnants of sauces at me. My job was to make all this look edible.

I have to say, I did pretty well, using every dirty trick I learned at CIA. I turned leftover steaks into, say, Salade de Boeuf en Vinaigrette, transformed dead pasta and veggies into festive pasta salad, made elaborated aspic’d and decorated trays out of sliced leftover roast. I made mousses, pates, galantines and every other thing I could think of to turn the scrapings into something our aged but wealthy clientele would gum down without complaint.

That, in a few sentences, is the experience at the Paradise Beach Grille. I have had better food at TGI Friday’s, or even at Denny’s, for one-third the price. What this place specializes in is doctoring and dressing up very mediocre food so you, they hope, don’t notice that in fact, it’s not actually very good.

Let’s get down to the specifics. We started with half-a-dozen raw oysters. These were perfectly fine. No problem. The problem began with the entrees.

My companion ordered the Louisiana Steak Salad, which the menu described as follows: “Thinly sliced Angus Skirt Steak sautéed with onions & peppers in a Cajun vinaigrette. Served on a bed of fresh greens & garnished with roasted potatoes & asparagus. Topped with crumbled Gorgonzola.”

What you actually get is a pile of greens, into which have been dumped what looks like fajitas from lunch, which have been chopped up. To these are added what look like either roasted potatoes or home fries, also from lunch, also chopped up. This is accompanied by two little dishes, one containing crumbled blue cheese – like, the cheap, overpoweringly salty kind you get at Costco – and the other with a really vinegary, brown “dressing” which completely overwhelmed anything else in the salad, and made the entire thing taste like salty turpentine, sort of.

I ordered the Coconut & Macadamia Encrusted Ahi Tuna Fillet. This was deliberate. Beach restaurant, literally a stone’s throw from Monterey Bay, let’s see how they do with a seafood dish, described as “Sashimi Grade Ahi Tuna, seared to medium rare, encrusted with coconut & Macadamia nuts served with a Thai sweet chili burre blanc.” The fact that they misspelled “buerre” in the menu might have been a tip-off.

So, how did they do? Answer: not very well. First, everything was lukewarm when it arrived, almost cool. It had clearly been sitting on a pass for some time. Second, the filet was not “sashimi grade” or anything close, unless sushi chefs have suddenly begun freezing and thawing pieces of mediocre tuna.

Third, as with the salad, this was a classic example of disguising second-rate ingredients and assembly-line cooking with overpowering flavors. In this case, the tuna had been dunked in some kind of oil, then buried in coconut and crushed Macadamia nuts, then fried, then covered in sort of a chili jelly. The overall effect was of turning a piece of tuna into a chicken-fried steak. It didn’t taste anything like tuna. It tasted like a gooey, sweet fried mess. This was delivered along with a pile of mashed potatoes, and another pile of cut-up, pan-fried veggies. Voila. Yuck.

Finally, on the recommendation of our server, for dessert we ordered the “Chocolate Raspberry Ecstasy.” We should have known better. The menu described this as “Our exquisite triple chocolate cheesecake is made with a trio of Ghirardelli chocolates and raspberries, garnished with raspberry puree. layered cookies, whipped cream & fresh mint.”
What actually arrived was one of those extremely rich, extremely heavy, overpowering desserts that seems like the offspring of a candy bar and some cheesecake. This was obviously delivered by a bakery somewhere, and dressed up with sugary raspberry sauce from a squirt bottle, a scoop of whipped cream, two rolled wafers and a sprig of mint leaf. In other words, you get a piece of cake from a bakery, dress it up with some gype, and ship it out the door as some kind of heavenly, once-in-a-lifetime dessert extravaganza. Two big, healthy people with big, healthy appetites could not finish half of this. It would have been like eating an entire bag of Snickers candy bars. It made me feel a little sick for about half-an hour after eating a third of it.

In a way, I guess what I prize in restaurants isn’t just the food – it’s also a kind of honesty, I suppose. By which I mean that the place does not pretend to be something it’s not, and delivers what it leads customers to expect. If this is the case, it doesn’t matter, really, whether you’re talking about a diner or a three-star Michelin extravaganza. But not only doesn’t the Paradise Beach Grill not deliver on what it promises, it does this repeatedly, deliberately, and to me, unforgivably.