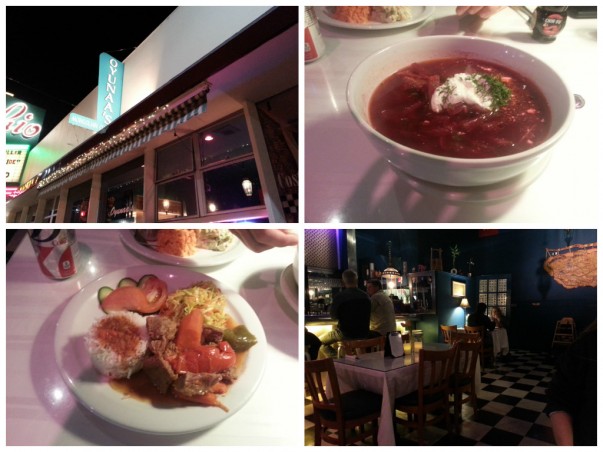 I sat and did a little sobering math before writing this review. If you multiply the number of meals per day (3) by the number of years I’ve been eating meals (never mind) and then make an assumption about the amount of food I eat in an average day, the total amount of food I’ve put in my face during my lifetime is absolutely shocking. TONS of food. Tons and tons of it.

So, every once in a while, I like something new. Oyunaa’s is new.

Oyunaa’s is Mongolian. It’s an absolutely lovely little jewel box of a restaurant that dishes up what’s billed as traditional Mongolian food. I have no idea if this is true or not, although Mongolia is definitely on my bucket list. What I do know is that the food is delicious, and unlike anything I’ve ever had anywhere else. Again, maybe this is some kind of Jedi mind trick Oyunaa’s is playing on all of us, but it seems to be a really interesting hybrid of Chinese, Russian and something else. It’s simple, hearty food, but it’s also pretty exotic. It’s from … Mongolia!!

Oyunaa’s is on the Soquel Avenue restaurant corridor, right next to the Rio Theatre. There’s not a lot of on-street parking, but there’s a massive lot about two blocks away connected with the Whole Foods/Rite Aid property, so there is plenty of free parking.

Small and pretty. This is a tiny place – there are, perhaps, ten tables. The walls are painted a deep blue, with table lamps giving it a really nice glow and a few carefully selected Mongolian artifacts in the walls and the bar for decoration. The overall impression is of having stepped into someone’s living room, and it’s very pleasant.

Very good. Because it’s so small, it’s relatively easy for one server to cover the entire floor. One caveat, however – the kitchen, which I understand consists of Oyunaa herself, can be very slow. Drinks come quickly, but dinner can take a while.

Overall, it’s hard to describe. It’s simpler than Chinese, although it has some elements of Chinese cooking in it. It’s heavily influenced by Russian cooking, but it’s not really Russian. It’s simple, which is a big plus in my book. And it’s good.

For an appetizer, we began with a big bowl of borscht. This is a traditional, hearty Russian soup made of beets and beef, with a big hit of sour cream on the top. It was great. The sweetness of the beets and the savoriness of the beef worked really nicely together, and it was a good execution of a favorite dish.

My entrée was Gulyash – cubed beef seasoned and slow simmered in a tomato base with bell peppers served with rice and cabbage salad. The menu described it exactly – basically, beef cubes, served with peppers, rice and cabbage salad. No sauce, no decoration, nothing complex, absolutely nothing even remotely fancy. You could imagine eating something like this in the middle of the Mongolian desert, having just spent ten hours on a horse.

But it was good. The rice was perfect. The beef cubes were, in fact, very tender. The cabbage salad was kind of what coleslaw is when it’s done right. Even the peppers were perfect. Someone had put a lot of time and care into doing what was the simplest dish I could possibly ever imagine just exactly right.

The other entrée was vegetarian buuz – these are steamed dumplings filled with spinach, shiitake mushroom and tofu. The whole concept of these things is fascinating. According to Wikipedia, they are similar to seven other forms of basically the same thing, produced all over Asia. They are:

And what these are wonderful. A mixture, as described, of veggies, wrapped up in a dough pocket and steamed. The ones prepared by Oyunaa were obviously made by hand – you can’t just pick these things up at Safeway – and they were fantastic. Tender, rich, and surprisingly filling, and served with a potato salad that was also homemade, and wonderful. Wash everything down with an IPA beer, and you’ve got a terrific dinner.