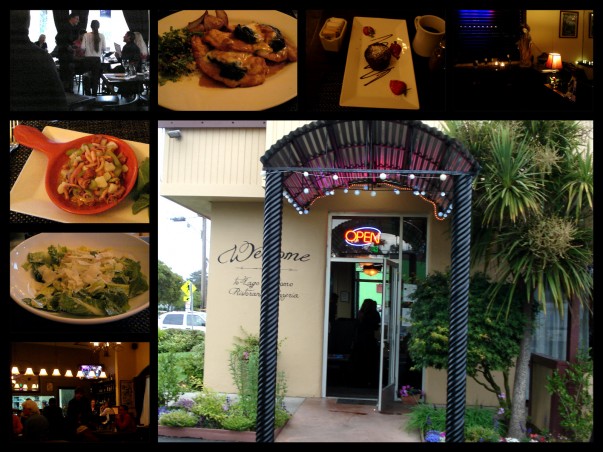 Lago di Como is an odd place. The food isn’t bad, and everyone’s friendly and everything, but you get the impression when you go there that they’re just kind of making it up as they go along, and they’re not really serious about it. Don’t get me wrong – I liked the place, and I enjoyed my meal – but there is something really amateurish about this restaurant.

So, if you’re in Santa Cruz to go to the beach, or with a big group, and you just want to get an adequate Italian meal, then this place is just fine. However, if you’re looking for really good Italian food, and you’re willing to work for it a little (small places, waits, higher noise level) then I’d recommend somewhere else – Caruso’s, or Lillian’s.

The funny thing about this place is that they not only are sort of slapdash about things, but they also seem sort of self-conscious about it. At the end of our meal, the waiter comped us our dessert, which was a nice thing to do, and appreciated, but sort of demonstrated that they knew what was going on the whole time. Interesting.

Decent, but nothing to write home about.

One appetizer was Polpo alla sarda -- octopus tossed with onion, potatoes, and celery in a lemon olive oil citronette. This is a fresh, warm salad, which I think would be fantastic if everything in it was absolutely fresh, and it was made to order. What arrived at our table was a small orange bowl with what I suspect was frozen octopus that had been thawed, along with onion, potato and celery chunks. The whole thing was relatively tasteless, and when I was finished, the bottom of the bowl had a layer of oily water in it. I really think the whole thing had been composed of frozen, thawed-out stuff.

The second appetizer was a Caesar salad, which is something any Italian chef should be able to execute in his sleep, drunk, while chained up inside an abandoned warehouse. Lago di Como produced one that was decent, but also slightly dry, and a little dense and challenging.

The entrees were better. The first was chicken scaloppine -- Scaloppine di Pollo alla Modo Mio, which is pounded chicken breast topped with baby spinach and mozzarella cheese in a white wine lemon sauce. This dish was terrific – flawlessly executed, chicken done perfectly, and the sometimes-tricky combination of spinach and cheese also beautifully done. This comes with side dishes of couscous and roasted potatoes, which were also perfect.

The other entrée, squid ink linguine with mussels, clams and fish, was also pretty good. The chef was a little too liberal with the oil – the whole thing had a slightly overpowering, slippery feeling. Also, I get tired sometimes of kitchens using this dish as a way to cut down on their food costs – the seafood consisted of three or so clams, a handful of mussels and a couple of random pieces of fish – but all in all, a nice effort and a good entrée.

Finally, after having our giggling waiter return to tell us that the dessert we had ordered was actually unavailable, we settled on a chocolate soufflé. It was fine – correctly done – but dolled up with the usual cheap-trick restaurant business of first, dropping three strawberry halves onto the plate, then hitting the whole thing with a couple squirts from a squeeze bottle of Hershey’s chocolate syrup, sprinkling about a teaspoon of powdered sugar over the whole thing and suddenly – shazam! – dessert creativity. The soufflé itself was, as I’ve said, fine, but the decorations were kind of annoying.

The Ambiance of Lago di Como

A little strange. The building is basically a square modern box that looks like it used to be something else. It’s in the middle of a big, empty parking lot, and the entrance is an elaborate Italianate portico with the rain shield that looks like it was just sort of stuck onto the building. Although there are some decorative touches inside, like immense curtains that look like what I’d imagine George Clooney’s living room on Lake Como in Italy resembles (the name of this place translates for some random reason at “Lake Como”) the building and its interior look like just enough was done to it to signal “Italian” and not much more.

Really amateurish. Endearing, in the way that a large, stupid dog that makes a mess in the kitchen is, but it was fascinating to watch the serving team get every single thing wrong, item after item after item, and sort of not care. A few examples:

Moderate – $93, including drinks, appetizers and a shared dessert. Portions are moderate also.

Bottom line – good place for a fast, reasonable dinner, but you will not gaze around the dining room and believe you’re in Italy.