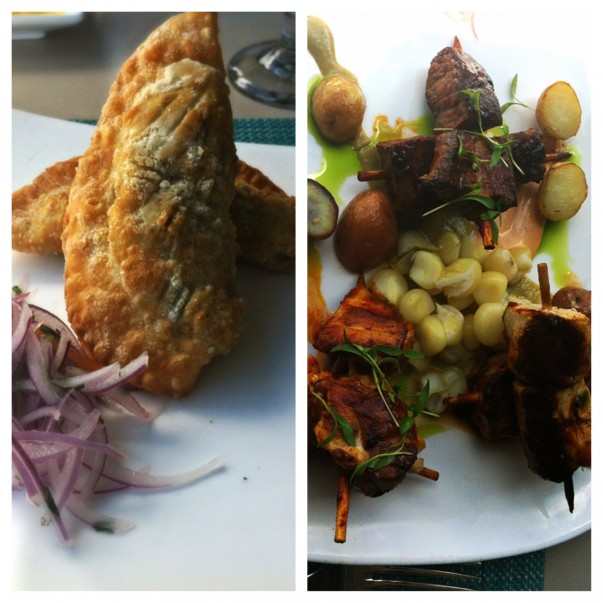 When San Francisco offers one of its rare clear, sunny, and warm days, you have little choice but to make the most of it. With baseball games and the America's Cup, summer in San Francisco is in full swing. During a stroll along the Embarcadero, we came across La Mar Cebicheria just down from the Ferry Building Marketplace, and decided to stop in for a Peruvian lunch.

To take full advantage of the beautiful day, we were seated on the large back patio, which was a huge draw to this restaurant. The patio is situated along the waters of the San Francisco Bay, and we were lucky enough to catch a glimpse of some of the sailboats from the day's races. Everything from the atmosphere to the fresh seafood made for a wonderful summer afternoon in San Francisco.

La Mar Cebicheria is located on the Embarcadero, just a short walk from the Embarcadero BART station, and very close to the Ferry Building Marketplace. Though public transportation and walking are recommended, there is street parking at metered spots, if you can find one, and some pay parking lots, though this option can be expensive.

The restaurant is clean and open and fresh, which also seems to reflect the concept of La Mar's food. The inside dining area is large and feels very open, though we were quickly whisked through to the back patio. Surprisingly large, the patio is situated along the water, giving the feel that the seafood is freshly caught by one of the passing boats on the bay.

Our server was very knowledgeable about the menu and about the cuisine of Peru in general. He provided several great recommendations along with a thorough explanation of many menu highlights. The service wasn't especially quick, though we weren't there for a fast meal so it was fine.

A bit on the expensive side, La Mar's plates are small and the prices are high. We ordered some appetizers and a few entrees to share (upon recommendation from our server) and without drinks, our costs came to about $35 per person.

La Mar Cebicheria is a Peruvian restaurant specializing in seafood, especially, as its name suggests, cebiche. Also commonly spelled seviche, or ceviche, it is the Peruvian version of a citrus-marinated seafood dish. The raw fish briefly soaks in the house marinade, called “leche de tigre” (tiger's milk), which “cooks” it the slightest bit. It's still essentially raw fish. We selected the cebiche clasico, which was halibut, served with giant kernels of corn and sweet potatoes. La Mar's cebiche is light and fresh, and a good start to a summer lunch.

As a side note, though we arrived in the afternoon, we still ordered from the brunch menu, though it didn't offer any of the typical items found on a brunch menu in the United States. Instead, it featured a page of small plates and another page of larger plates, or entrees. Before we ordered, we were given a basket of house-made sweet potato chips, banana chips, and regular potato chips, served with dipping sauces.

In addition to the cebiche, we ordered the causa (whipped potatoes) topped with octopus, which was surprisingly spicy. We also ordered the empanadas de lomo saltado, which were empanadas filled with delicious steak, and were very satisfying.

For our entrees, we chose the mixed platter of anticuchos, or grilled skewers of beef, fish, and chicken, which were served with some tasty sauces, and the jalea, a mixed plate of fried seafood, which was light and crispy.