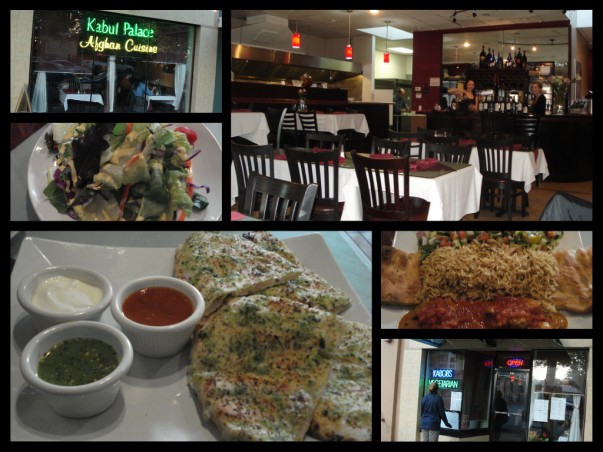 This was a very, very good meal. A few completely random thoughts:

Afghanistan has basically been at war for the past three decades. The life expectancy there is 45 years. Although I’m sure this is genuinely Afghan cooking, I’m equally sure that almost nobody in that country eats this well.

The one thing that’s clearly in need of improvement at Kabul Palace is the presentation of the food. It’s wonderful, but the way it looks when it hits the table is distinctly, ah, unappetizing. They need to work on this.

Otherwise, a terrific meal, a wonderful experience, and a great example of an ethnic restaurant climbing the rungs into being a really good, really successful (one hopes) place to eat.

Very pleasant , and obviously the result of a lot of hard work. In its previous incarnation, this place was a classic ethnic starter restaurant – charming, but also a little cheap-looking. Now, with nice new fixtures, and a complete interior makeover, it’s moved up several notches, and is a nice, professional, modern place. Extremely pleasant, and contemporary looking. Also spotless.

Great. Friendly and unpretentious, with a lot of UCSC kids as servers.

Inexpensive – $68, including drinks, a shared appetizer and one dessert. Portions are very generous, and ended up as the next day’s lunch.

Great. Although I know about as much about Indian food, to which this was related, as your average bear, I would not consider myself as any kind of authority. Afghan food seems to be like it, but with fewer, simpler ingredients, and more of an emphasis on a different array of spices, and more use of yoghurt and ground meats than Indian food. Beyond that, I’m not really in a position to categorize my meal except to say that it was good. I will also have to spend some time listing/describing ingredients, since everything is so unique.

The appetizer was aushak, which is a kind of flattish dumpling, made with leeks, chives and spring onions, and topped with yogurt and meat sauce, sprinkled with mint. Basically, it was sort of like two-dimensional gnocci, with meat sauce. Very good, with a pretty healthy hit of onions and leeks. Both of us enjoyed it, and the yogurt was a nice counterpoint.

Kabul Palace also serves, as you might expect, several varieties of naan bread. Ours was made with goat cheese, which was a great idea. The slightly bitter taste of the cheese balanced out the savoriness of the bread, which was really rich, and came with three different dipping sauces. This was good bread, and helpful for insuring that none of the meal went to waste. Pieces of naan make excellent mops.

Our entrees were both different versions of challow, which is a kind of meat stew, basically. Mine was chicken, which was prepared with onions, garlic, yogurt and spices. Beth had lamb korma challow, which is lamb cooked with onion, garlic, jalapeno (I didn’t know that this was something from Afghanistan) and spices. In both dishes, this was accompanies by rice cooked in lamb juice which made it extraordinarily rich and essentially perfect. The overall effect was wonderful – a rich, complex and deep challow, prepared with flavored rice. It was delicious, and although spiced differently than Indian food, a good deal like it.

Finally, for dessert we had a rice pudding, which was delivered with cardoman, and other spices. It was great also, and enormous – plenty for the two of us, although it represented just a single serving.

It’s difficult to pigeonhole Kabul Palace. It’s in kind of a rundown part of Pacific Avenue. It serves an unusual cuisine that’s not particularly familiar. It’s an ethnic place that’s clearly growing up, but it lacks the heft or the foundation of a place like Lainani, or Souf. Yet, the food is wonderful, as is the service. Hard word evidently pays off, and Kabul Palace is an excellent demonstration of that. Try it – strongly recommended.