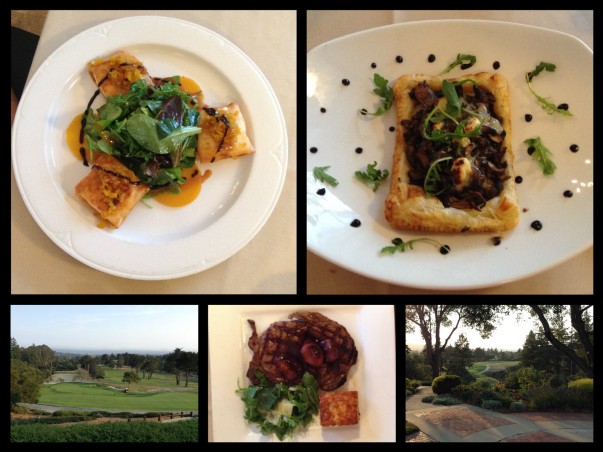 This place is a hidden gem, and an unbelievably romantic throwback to a whole other era in the history of the Bay Area. A little background:

Santa Cruz is overwhelmingly about the city of Santa Cruz, and the University of California Santa Cruz. That means leftist, hippie-ish sixties throwbacks, generally. It does not mean affluence, elegance, and it definitely does not mean country clubs.

However, geographically, Santa Cruz is surrounded by smaller towns and areas that are about these things. Right down the road is Monterey/Carmel/Pebble Beach, which is where Fortune 500 CEOs go to retire and play golf, and is home of some of the most legendary country clubs in the world. The other towns in the area – Aptos, Scotts Valley and Capitola – are not full of hippies either, and have nice golf courses.

Hollins House is on the border between Scotts Valley and Santa Cruz. It’s part of the Pasatiempo golf complex, which was built by a woman named Marion Hollins, who the house is named after. The course is breathtakingly beautiful, with absolutely incredible views over the hills and the city and into Monterey Bay. The list of famous golfers and movie stars who have played there is like a Who’s Who of old Hollywood, and includes people Bobby Jones, Will Rogers, Mary Pickford, the Rothschilds, the Vanderbuilts, Babe Zaharias, Spencer and Louise Tracy, and so on. There are pictures in the bar to prove it.

The restaurant is located in a lovely old building, covered in ivy, that used to be Ms. Hollins’ home. This is a real showpiece, with enormous windows, high ceilings, and all the architectural detail of several generations ago. There is not, as far as I know, another building like it in the area. Ms. Hollins herself was an extraordinary figure – a very early professional golfer, someone who had a hand in some of the most famous golf courses in the country, such as Cypress Point, and who founded an all-female golf club in New Jersey. This place is steeped in genuine romance. And the food, oh yes, is wonderful.

As I’ve said, Hollins House is a nicely-preserved example of what the high life in California used to be. Although just slightly run down, it’s elegant, airy, and has absolutely incredible views. It’s a good idea to arrive around sunset if you can, because the views are mind-bending. You look from the top of a hill down a golf fairway lined with trees to the lights of Santa Cruz, beyond which is Monterey Bay, with sailboats. Simply beyond belief.

Great. The servers seem to be students from the University, but they’re fast, professional, young and pleasant.

Pretty expensive. $120 for two, including drinks and dessert. The portions are about right.

The food is wonderful. Country-club food is usually mediocre – staples and simple stuff, usually – and this was not. Whoever is back in the kitchen really knows what he’s doing, and is preparing gourmet cooking on a really high level. It was impressive. It was also really high-calorie. Culturally, this kind of cooking is not about healthy, it’s about good, and this was both.

For appetizers, we began with a mushroom galette. This is something I haven’t seen in years – it’s straight out of Julia Child, but man, is it good. It’s essentially a small mushroom tart, with goat cheese, baked onto a rich, flaky pastry. It was wonderful – incredibly savory, and about a million calories. The other appetizer, a beet and goat cheese salad, was just as good, and just as loaded with calories. This is rich, country-club food, folks, which explains a lot.

Beth’s entrée was chicken picatta. This was delivered in a kind of nouvelle cuisine arrangement – three very small medallions of chicken, with asparagus tips, fettucini, capers, fontina cheese and Meyer lemon. It was fantastic – the exact opposite of the gloppy mess that Italian chicken dishes can become. It was even sort of healthy.

The other entrée was a ribeye steak – again, who cares about calories? Steak is tricky. It’s an expensive ingredient, it’s hard to disguise when you’ve screwed it up, and there’s not a lot of margin for error. If you grill it for one minute too many, you’ve got a problem. This one was perfect. Just plain perfect, perfectly sauced, garnished with braised shallots, and served with another Julia Child special, potatoes dauphinoise. These are basically potatoes au gratin – sliced, and baked with cream. And cheese. And butter. Mercifully, what arrived was small – about two inches square – and it was wonderful. If it had been any bigger, I would not have been able to walk out of the place.

Finally, dessert. Mine was Bananas Foster – a banana sectioned, deep fried, and served over ice cream with caramel sauce. Mercifully, they did not, as some places do, hose it down with brandy and set it on fire. It was great.

Beth’s dessert was a surprise. I don’t even know what to call it. Imagine a parfait glass, filled with Greek yogurt and honey. Sprinkled on top are little nuggets of juiced, sugared fruit – strawberry and lemon, I think. The juice has been frozen and chopped, repeatedly, giving it a really powerful taste that’s a combination of sweet and sour. This is almost molecular gastronomy. It’s wonderful, inventive, surprising – the last thing you expect from a place to play golf.

The bottom line is that this is wonderful food, delivered in a setting that is elegant, gracious, and preserves the kind of history California specializes in bulldozing or paving over (see Anaheim, California for this – Disneyland recreates the main street of a typical small town in the US after bulldozing the original small town that was actually there). A great place for a great meal.