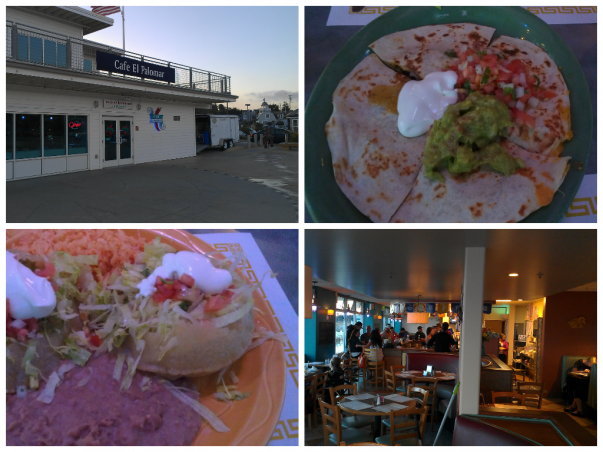 El Palomar - A real winner of a restaurant!

There’s a certain mystique attached to the California beach restaurant. A lot of the myth about California is attached to the beach scene, and places right on the water almost always come with really high expectations. El Palomar Cafe in Santa Cruz delivers. By the way, if you’re interested in such things, “Palomar” is Spanish for “dovecote”, which is a structure created to house doves or pigeons.

The key to this place is the location. It is right – and I mean RIGHT on the beach. If you step off the patio around the restaurant, you’re in the sand. If you walk about thirty yards through the sand, you’re in Monterey Bay. From the restaurant, you can see Santa Cruz Harbor, the lighthouse, the lifeguard shacks, people playing frisbee and hanging out on the beach, you name it. The whole scene is right at your doorstep, literally. In your mind, if you cue up “Surfin’ USA” you’ve pretty much got it nailed. This place so exemplifies what the California beach scene is that some people in Santa Cruz take their laptops there on sunny afternoons to work, and refer to Palomar as their “beach office.”

One thing that makes El Palomar so great is what it isn’t. It isn’t fancy, or pretentious, or anything but good, simple Mexican food served up in a classic location. It’s sunny, casual, right on the water, and about as laid-back and California as it gets. If, after the beach, you want a beer and a burrito, in a place where nobody is in a hurry, this is your restaurant. What’s not to like?

Palomar is located on East Cliff Drive, within walking distance of the Santa Cruz Harbor. There’s usually lots of parking near the harbor, but it’s also metered, so bring quarters. From there, it’s a five-minute walk to Palomar.

Address: 2222 East Cliff Drive, Santa Cruz, California 95062 (Note: There are two Palomars in Santa Cruz. The one on Pacific Avenue is different, and not on the beach. This is the other one)

Great. Palomar is one big room, with wraparound windows that provide a stunning view of the beach and the bay. There’s a full bar, at which are usually parked some locals – surfers or fishermen – talking about their day on the water. The windows are also tinted, so when the sun is streaming in, you don’t get barbecued. A great room.

Efficient, personal and super-friendly. It took the busboy about fifteen seconds to show up and take drink orders, which arrived about a minute later along with some chips and salsa. Our server, Alexi, chatted with us about, among other things, surfing, swimming, pedicures, yoga, weight loss and her new van. Really nice, friendly and warm.

Very reasonable. $57 for two, not including tip, but including four beers. Large portions – we had lots of leftovers to take home.

Classic, simple, good Mexican food. We began by splitting a simple quesadilla appetizer. It was perfect – hot, crispy tortillas, chicken inside, with fresh diced tomatoes, sour cream and guacamole. Accompanied by a couple of Des Equis, this was the perfect starter.

For entrees, we first ordered the Pozole. This is the kind of dish your Mexican mother would have made for you as a child, if you were lucky enough to be Mexican and have a mother. It’s basically a tomato-based soup, into which are added hominy and shredded pork. The whole thing is then simmered for a long time, until the pork is falling apart, and served in an enormous bowl along with tortillas and a plate of toppings – oregano, chopped cabbage, diced red onions and limes. The result is a healthy, hot, delicious and spicy soup that unlike a lot of Mexican food, isn’t just toppings glopped onto starch. It’s really good.

The second entrée was Sopes, which consists of a pair of tortillas, puffed into a shell, filled with shredded chicken, and served with re-fried beans, rice, shredded cabbage, tomatoes and guacamole. Another winner. Hot, delicious and just plain good.

With a few high-end exceptions, Mexican food is simple, nourishing and inexpensive. Just the right thing after a day at the beach. Which, fortunately, is exactly where El Palomar is. A real winner of a restaurant. Highly recommended.