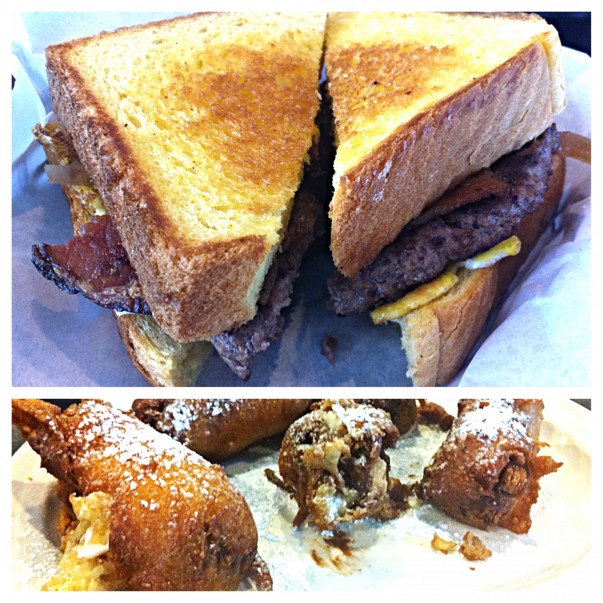 Digger's Diner is a casual restaurant that serves old-fashioned, classic American food, including classic burgers, as well as some dishes that are hard to find today, like patty melts, reubens, and malted shakes. It has won awards for its food over the years, including “Best Burgers” and “Best Hot Dogs,” and scored high for its fries and breakfast. What sets Digger's apart from other American diners is not only the classic foods, but the innovative ones: the “Incinerator” sandwich – steak with bacon, jalapenos, and jack cheese, sweet potato fries served with maple syrup dipping sauce, or the breakfast caramel pecan waffles, Oreo pancakes, or famous cinnamon rolls.

And then there's the desserts. Digger's Diner has been on my radar for about a year, since I first heard about their dessert special. In addition to the 20+ flavors of milkshakes they offer, Digger's Diner offers decadent desserts not often found away from the fairgrounds. Deep-fried Oreos, chocolate bars, including Reese's, Snickers, Kit Kat, and Twix, and when available (not currently), deep-fried Twinkies and cupcakes. Yeah. I prepared for this meal with some extra exercise and a few days of extra healthy eating.

The Hayward location of Digger's Diner is not far from the 880 freeway on West Winton Avenue. There are two other restaurant locations: the original diner in Concord, and another in Brentwood. For the Hayward location, there is a decent sized parking lot around the back, shared with the Mexican restaurant next door. Digger's is within walking distance to the Hayward Courthouse – jury duty never seemed so tempting, with the promise of a burger and shake as your reward.

(For the Hayward location)

Digger's Diner, as its name suggests, has a graveyard theme – which sounds like it could be morbid, but the way its done is all in fun. The restaurant's design plays with the theme, with a punk-edge to the playful skeletons and classic checkered borders decorating the walls.

The atmosphere is very casual and much like an old diner. There are plenty of booths and tables in the fairly large dining room. Toy boxes filled with toys near the waiting area signify the family-friendly vibes of the joint. Free WiFi encourages people to set up and hang out, working or playing while they eat.

The servers were really friendly and were patient with these first timers. The food came out quick. It seemed like many of the customers were regulars, which is always a good sign. Our waitress was especially helpful with some great recommendations, and didn't (outwardly) judge us for the crazy amount of food we ordered.

The food at Digger's is American food at its finest. Though the best foods at the restaurant are far (and I mean far) from healthy, the ingredients seemed to be high quality and nothing was really greasy – even the deep-fried desserts were crunchy, and not all soggy. I'm not being entirely fair about the lack of health foods on the menu – there were veggie sandwiches, wraps, and salads on the menu – but the real pull to Digger's happened to be the not-so-healthy dishes.

There are more than 10 types of burgers on Digger's menu, including some over-the-top specials, like the “Crypt,” which is a huge burger with tons of toppings, and part of the restaurant's food challenge. Called “Six Food Under,” this almost-impossible challenge requires contestants to down one appetizer, the aforementioned Crypt burger, an order of Ball Park Cheese Fries, a milkshake, deep-fried Oreos, and a cup of fruit. These 6 items must be eaten within 30 minutes, and conquerors get their photo on the Wall of Fame, along with the free meal and a t-shirt. The losers, whose list is considerably longer, are condemned to the Wall of Shame.

I chose a special burger called the “Stubb,” which is a smaller version of the Crypt, and is topped with grilled onions, bacon, a fried egg, and both Swiss and American cheese, served on Texas Toast. The egg was what sold me on the meal – though I'd been hoping for its yolk to be a bit runny. I didn't ask for the egg any particular way, and neither did the waitress, but the fully cooked yolk is the least messy way to go. Though I still would like to try it that way, the burger was a success. There was a lot going on, from the buttery toast to the sweet onions, to the two types of cheese, the eggs, bacon, and burger. But it was all good, and a bit like a breakfast burger. My dining buddy got the classic patty melt and was overjoyed with its old-fashioned perfection, from the rye bread to the cheese and the patty. We shared a side of the sweet potato fries, which were crisp and tasty. There are many other interesting fries on the menu that I can't wait to try – it was tough to decide.

On to the desserts. Though I was already full from my giant burger, I'd come for the desserts and couldn't leave without trying some (okay, pretty much all) of them. We ordered the deep-fried candy bar sampler, choosing Snickers, Kit Kat, and Reese's. Who knew there would be so much? This could have fed several more people, but wow. For those who've never had this delight, the constitution of the candy bars completely changes, as they're dipped in batter and fried to crisp, melted perfection. Incredibly, we had ordered milkshakes to-go at the same time (for later!). The waitress recommended the Strawberry-Oreo shake, which I wasn't able to try until much later, thanks to the food coma I suffered once I got home. (But once I did try it, the shake was amazing.)

In short: the food was amazing, there were too many foods I want to try, and trying to fit them all into one meal was not the best idea. Digger's Diner is a place to return many times, once I fully recover from this time.