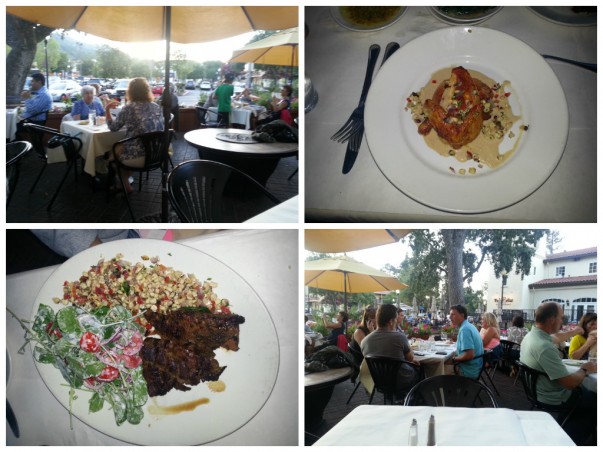 A couple of years ago, through some finagling, I got to take a first-class flight on Singapore Airlines from Singapore to San Francisco. This flight, in this service class, on this airline, is the best the airline industry has to offer, bar none. It’s pretty much the standard for luxury air travel. It was, basically, an eleven-hour once-in-a-lifetime experience, and it reminded me somewhat of our dinner at the California Café in Los Gatos. It was an enormous production that was basically fine, but that ultimately, despite all the huffing and puffing and fussing, ended up being kind of impersonal. Let me amend that – VERY impersonal. And ultimately, frankly, irritating.

This California Cafe, first of all, is enormous. It seats hundreds of people, in two main rooms, an indoor room about the size of a tennis court, and an outdoor seating area that faces the Old Town neighborhood of Los Gatos, and it also pretty large. The place is huge.

The most striking thing about this restaurant, in addition to sheer size, is the relentless, professionally-developed marketing that begins when you walk in and ends only when you leave. Tasteful, precise, expertly delivered, and obviously developed by a restaurant consultant somewhere. The food is fine – we’ll get to it in a minute – but what’s really important to this restaurant, obviously, was arranging every single interaction you have to maximize revenues, and insure that you come back.

In a way, it’s kind of reassuring and pleasant – sort of like watching a movie with Hugh Grant in it. You know, basically, exactly what you’re going to get before the whole process even starts. There’s something kind of comforting in that level of professionalism and/or predictability. And there’s also a reason. A little online sleuthing, and here you go – here’s who owns this place:

San Francisco based Tavistock Restaurants is a rapidly growing, privately held company operating 16 upscale and fast casual restaurant concepts with more than 100 locations across the U.S. We are committed to building long term value and profit by leveraging the quality of our food and beverage with engaging service. We are also committed to expanding our high potential growth concepts, notably Freebirds World Burrito.

Got it. That wasn’t a restaurant, it was a “growth concept.” That wasn’t a waitress we encountered – it was “engaging service.” And the big idea here is to “build long term value and profit.” Oh. I get it now.

And this charming, quaint little operation is itself just a cog in a much larger corporate machine, the Tavistock Group. Here’s what THEY say about themselves:

Tavistock Group is an international private investment organization which provides capital structured for investment opportunities in a variety of sectors throughout the world. With private capital, we are flexible, decisive and discreet with our investments, empowering management to focus on building value.

Headquartered in The Commonwealth of The Bahamas, Tavistock Group has offices all over the world, including the United States, United Kingdom, Luxembourg, Romania, Sweden, Norway, Poland, Bulgaria, Mexico and Argentina.

Got it. Your host at the California Café is actually a multinational private equity fund headquartered in the Bahamas. I don’t know about you, but I kind of prefer to believe that the food I’m eating has been prepared by actual human beings. On with the review.

The California Café is on University Avenue, in Los Gatos, one of the two main streets of the town. It literally faces a parking lot, so there is all kinds of easy parking available, although if you’re there when it’s busy or crowded (say, a Saturday night) you might have to hunt around a little.

Address: 50 University Ave, Suite 260 Los Gatos, CA 95030 (this is the first time I’ve found an address to be kind of funny. Specifically, the idea of a suite number for this place. That’s kind of like going in to a harbor, and needing a slip number to find a moored aircraft carrier.)

Perfectly nice, but kind of corporate. This makes sense, given that Los Gatos is the home of a lot of wealthy Silicon Valley executives. This is the atmosphere they’re used to. Remember the air travel analogy at the beginning of this review? Think of the business-class lounge for United Airlines at O’Hare. Same ambience.

Service: Professional and attentive, but also obviously really scripted, and ruthlessly enforced. Sort of a restaurant version of the behavior of the characters at Disneyland. Our server was “Amanda” who, although cheerful, pretty and pleasant, also took us through a flawless, professionally-written introduction to the restaurant, the menu and herself that was one long marketing exercise.

Pretty steep -- $85 for two people, including coffee and drinks.

For instance, the first question was something like “Have you encountered this restaurant before?” Not “have you ever eaten here before?” but something a lot more tricked-out, fancy and targeted. We also got asked if we had any weird food allergies, food preferences, were keeping kosher or halal, or whatever. Thank you, Tavistock Group General Counsel’s Office. There was also a lot of droning on about the seasonality of the menu, how it would be changing to the fall menu on Labor Day, and so on. Yeah, right. I heard a waiter at the next table over carefully, and without being asked, defining what a wine flight was for the party eating there.

Since the answer to Amanda’s question concerning whether we’d ever eaten at the California Café was “no” the next move was the instant arrival of what was billed as an “amuse bouche”. Typically, this is a tricky one- or two-bite item that’s offered to everyone in a restaurant, as a kind of warm-up to the meal. Ours was, I’m pretty sure, offered only to people who were first-timers to the restaurant, and was some kind of scoop of ground quinoa mixed with some other stuff served in some kind of edible leaf. Since an amuse bouche is supposed to be how the kitchen demonstrates its abilities, and this was something that could have been prepared by a sixth-grader, this was another clear marketing move (“First time-patrons should receive an amuse bouche selected from the Official Tavistock Amuse Bouche Approved List and prepared pursuant to the Tavistock Restaurant Group Amuse Bouche Guidelines”) intended to make us a) feel special; b) return and c) feel like we were getting some kind of personalized gourmet experience. It wasn’t bad, but I forgot about it six seconds after I ate it.

Because – well, just because – we skipped appetizers and just ordered entrees. The first one was the herb-marinated half chicken, served with corn salsa on a bed of artichoke cream. Basically, a grilled half-chicken. And it was good – very good. Crispy skin, juicy and moist, and served on an expertly-done bed of pureed artichoke and some corn. The side of sautéed Swiss chard was also good – I love bitter greens, and this was properly done.

The second entrée was the cilantro skirt steak. This arrived with grilled corn salsa, upland cress salad, cherry tomato, and ranch dressing. It was good, too – expertly done, and very good. Coffee, a drink or two for each of us, and we were out of there.

Ultimately, there’s not a lot to say about the food at this place. It’s professionally-done, and basically, good. It’s the kind of place to have a business dinner or on an expense account. This being Northern California, our dinner was enlivened somewhat by our next-door neighbors, who had a large Rhodesian Ridgeback dog with them (remember, we ate outdoors). Other than that, the marketing and the corporate-y-ness kind of colored the whole evening.

California Café – come for the food, stay for the marketing.