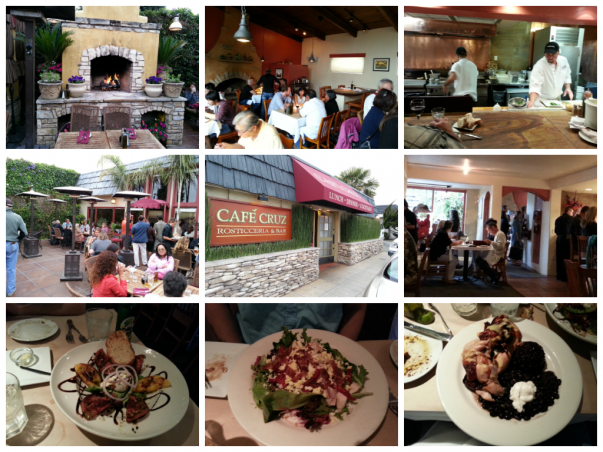 One of the fascinating things about review restaurants is that along with being a place to eat, a restaurant is also a business. It has a number of different moving parts – the kitchen, the waitstaff, ingredients, the customers – all of which have to be fit together properly. Sometimes it works. Sometimes it doesn’t. And sometimes it just sort of works. Such was the case with the Café Cruz.

Given all the moving parts, one excellent way to test out a restaurant is to go there when it’s really busy. Santa Cruz is a beach town, and does an immense amount of weekend business. We visited the Café Cruz on a Saturday night in July. This is the peak of the tourist season. Earlier that day, traffic entering town had been backed up for miles. The place was packed. And we walked in with no reservations, and simply asked for a table for two, at around 7:00.

Incredibly, we got one in about thirty seconds, immediately after being told that the wait was going to be around 45 minutes. The service was like that – really, really fast, and really efficient. The restaurant is nice. It’s clearly a well-run operation. However, the food is distinctly mediocre. Not bad, necessarily, but simply nothing to write home about either.

In thinking about it, the best way to describe eating at Café Cruz is to analogize it to a date with a woman who’s very pretty, but neither strikingly beautiful nor, you learn, especially intelligent. The evening is nice, but ultimately, to quote what Gertrude Stein is said to have said about Oakland, California, there’s not much there there. Go for the ambiance, the service, and so on, but don’t expect to be blown away by the food.

Café Cruz is on 41st Street, which is a very busy commercial strip, especially in summer. There is nowhere near enough parking – cars were literally parked on the sidewalk in front, and the tiny lot behind this it was both jammed, and difficult to maneuver in. The surrounding establishments all have signs saying things like “No Parking for Café Cruz.” Your best bet is to park across the street, in the large parking lot for Best Buy/Home Depot etc. and cross the street.

Busy, but pleasant. The restaurant is divided into a number of different areas. You can sit at a counter in front of the open-air kitchen, in two outdoor areas or several indoor areas, which are broken up by low walls or columns. Very nice and, unlike, say, Akira, not too loud. Despite being seated in a VERY busy part of the restaurant, it was easy to have a conversation.

Terrific. We had at least three really well-coordinated servers, and everything got taken care of fast. One complaint, however, was that it was a little too fast. Our entrée appeared about four minutes after our appetizer, which rushed things a little.

Not bad - $76 for dinner for two, including drinks for two and dessert. The portions were substantial.

The food is interesting. It’s good – but it’s good in the sense of “not bad.” Ultimately, it’s a little bland and a little uninspired. Again – not bad. Just not remarkable.

As an appetizer we started with Heirloom Tomato & Burrata Cheese. I was looking forward to this – during the summer, this is a classic take on an Italian favorite – slices of fresh tomatoes, mozzarella cheese, basil and a little dressing. I remember it from my childhood. Santa Cruz is right next to California’s Central Valley, one of the world’s great vegetable-growing centers. The dish was described as “Fresh tarragon aioli, balsamic syrup, red onion, and garlic crostini.” Sounded great.

All of the above were delivered, in a big shallow bowl adorned with the Busy Chef’s Friend -- visible syrup in a matrix pattern, courtesy of a plastic squeeze bottle. The total effect was somewhat underwhelming. The tomatoes were fine, but Burrata cheese, which is a combination of cream and mozzarella, didn’t really stand up well against the tomatoes. And tarragon instead of basil doesn’t work well either. Again, not bad – but not remarkable, either. Oh, well.

For an entrée, we decided to order something really simple – roast chicken. The restaurant features a big, very visible rotisserie, and there are a LOT of chicken dishes on the menu, so it should be good, right? They make a big deal out of the rotisserie, announcing on the menu that “At Café Cruz, we take rotisserie cooking very seriously.  We use only “38 North” free range air chilled chickens, season or cold smoke, then roast to create the special taste and tenderness that only spit-roasting can produce.”

To quote the script of Scarface, it was another round of “Say hello to my little friend” – the squirt bottle of sauce. What appeared was a pretty simple roast chicken, which had been hosed down with squirt-bottle sauce. Along with this, there were two sides. “Black rice” which was simply rice with something added to make it black, and plain black beans, the kind every Mexican restaurant within a thousand miles serves. The chicken was properly done, hot, and juicy, and basically good, but nothing special.

For dessert, we ordered what was described to us as “peach bread pudding.” This was – guess what? A little bland and uninspired. A slice of this on – guess what? A big plate decorated with sauces from a squeeze bottle, along with a scoop of vanilla ice cream and some cinnamon sprinkled around. Perfectly good, but not great.

The key to understanding this place for me was spending a few minutes standing watching the chefs do their thing. There were four or five cooks in an open kitchen, along with a head chef who was plating stuff, and making sure that everything looked pretty before it went out to the dining area. These guys were cranking – churning out dozens of dishes, really fast. They were definitely pros – they knew what they were doing – but they were also working fast, and under a lot of obvious pressure.

In these circumstance, and in a market where, unlike San Francisco or New York, people are not going to pay $50 for an entrée, what you get is pretty, decent, but slightly uninspired food. Which is what you get here. Again – go for the ambiance which is lovely, and the service, which is great, but the food doesn’t rise to the same level.

« The Great Sphinx of Giza Temple of Edfu »
One Comment