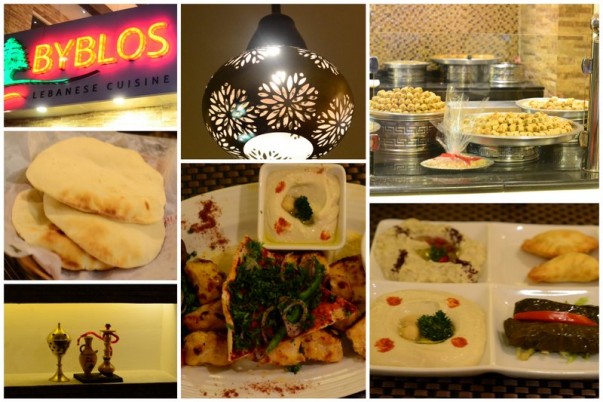 Review of Byblos Restaurant in Bangalore

The international cuisine restaurants used to be mostly restricted to star hotels until a couple of decades back. However this is another frontier on which Indian map has become more dense over last few years. The growth of businesses has meant more global influence and more demand for different experiences. Although India has never been too far from the Middle East, the cuisine was a bit distant. As part of the influence and demand, these scene is also now changing and Byblos is one such example. Byblos is a Lebanese cuisine restaurant bringing the influences of Roman, Greek, Persian, Assyrian, Babylonian and Ottoman empire culminating into modern day Middle Eastern Lebanese dishes into a small kitchen. I was longing to try some authentic dishes from this part of the world, so I chose to go to this restaurant.

100 feet road in Indiranagar was always one of the arteries in the locality, it was much more residential even until few years back. The Metro construction did have an impact on the area's businesses, however since its completion, the area has totally changed the face with brands, shops and restaurants lining up most of this street. Byblos is just below the metro line close to the CMH junction.

Byblos, Bengaluru is open from 12 noon until 3:30 PM for lunch and 7 PM to 11 PM for dinner. Valet is available outside the restaurant as street parking is subject to availability.

The restaurant is spread over the ground and first floor with nice lighting from chandeliers and hanging lamps accentuating the various pieces of art from the middle eastern region. The ground floor has the kitchen and few seats while I took the stairway and preferred to sit on the first floor. I would have loved some more space between the tables for bit more privacy. The waiters sport a red long cap typical to the region.

The staff were pretty helpful and explained the menu well, even suggested the servings based on my personal preference. They were willing to listen in to the customers and even allowed me to substitute a hummus to the french fries for a side in one of the dishes.

Lebanese food, all of it which can be easily sourced locally, would cost about INR 1600 ($27) for a table of 2. Few of the desserts are priced on the higher side as a small portion of Baklava costed INR 350 + taxes ($7). I would have expected this in probably half or two thirds of this if not less.

Byblos, Bengaluru has a fairly elaborate menu with cold and hot Mezzah (starters), soups, salads and main course special platters. Hot Mezzah includes meat and potato kibbeh amongst others, while the cold includes babaghanouj, fattouch and more. I preferred to taste both with a cold and hot platter which included hummus, muttabal, vine leaves, falafel, cheese sambusek and spinach fatayer. Apart from the vine leaves which may not suit every taste bud, rest everything was good. The pita breads are served on the house and taste good while hot and I recommend having them with hummus.

For the main course, after much mind debate over chicken shawerma and shish taouk I went with the latter and liked every bit of it. Along with the course I also tried a local beverage called Ayran made with yogurt, which was fairly ordinary. Baklava as a dessert was good, however as I said the price was overdone.

Overall a good place I would recommend for a Lebanese cuisine in all aspects of taste, ambiance and service. I would just love it, if they can moderate their prices.