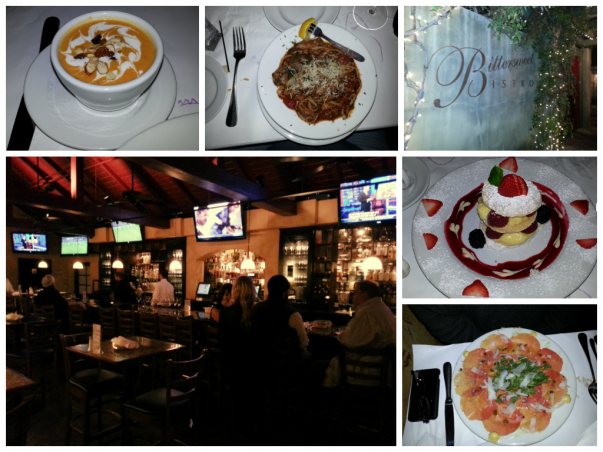 Review of Bittersweet Bistro at Aptos

An initial word of caution, please, or a recommendation for a grain of salt. When I went to Bittersweet, I was sick. I mean, really sick. Like, people sitting nearby were sort of alarmed at the noises I was making, and I wasn’t exactly at my razor-sharp best. It turns out, however, that Bittersweet is a perfect place to go when you feel crummy. It makes you feel better.

It is, first of all, enormous. It’s on the scale of Shadowbrook, or the California Café in Los Gatos. There are at least a hundred seats in an outdoor patio area, probably twice that many inside, along with a big bar, and a main dining area that seems the size of a tennis court. That being said, they do a very good job of executing the mainstays this kind of place relies on, as well as some really original, surprisingly creative dishes.

What really stands out, though, is the focus on sheer artistry. Whoever is back there in the kitchen cares a great deal about both presentation and service, and as a result, the dishes we were served were both beautiful and elegantly delivered. Our server actually crumbed the table before the dessert/coffee course, which is something I have never seen on the West Coast, and provided a very elegant touch.

All in all, this place manages to be simultaneously very big, and creative, which is no easy trick. The food is excellent, the service is great, and the result, while the exact opposite of intimate, was impressive.

The food is very good. Most of it is pretty standard – there’s not a lot of experimentation with this menu – but there is some, and the quality is very high. Additionally, as I said, it’s presented beautifully. Everything looks good, in addition to tasting great, which is a nice plus.

For appetizers, we ordered two things. By and large, the appetizers and the typical large-restaurant warhorses – buffalo wings, calamari, crab cakes, sliders. There’s nothing wrong with any of this, but when possible, we like to order something that allows the kitchen to prove itself, so to speak.

The other appetizer was a carrot-ginger soup, a combination of carrot, onion, celery, ginger, exotic fruits & coconut milk simmered in a vegetable stock. Easy to make – just put the right stuff into a Cuisinart, put it into a stockpot and let it simmer all day. Also good, and beautifully presented with a charming little design made of sour cream on the top. Very pretty, and very good.

For the entrees, one choice was the Carpaccio -- thin slices of raw angus beef, capers, Bermuda onions, Dijon mustard, arugula and shaved parmesan. This was a wonderful salad, although it’s very light – not the thing to order if you’re hungry, but delicious. It was also beautifully prepared – it looked like either a flower or a sunset, depending on your frame of mind. This was the kind of dish that you felt guilty eating, because that messes up the work of art in front of you.

The second entrée was linguini puttanesca. If you’re Italian’s a little weak, you may not realize that the translation of this Italian dish literally is “Linguini of the Whore” because of … well, never mind. It just is. Anyway, it’s a spicy sauce containing various shellfish and fish – rich, strong and satisfying. Our order was a small plate of this, which was plenty.

The finale, as always, was dessert. Our order, with Scout’s approval, was a lemon napoleon. This could have turned out to be almost anything, but ultimately, what arrived was one of the most striking and beautiful desserts I’ve ever seen. Strawberries, powdered sugar, a coulis, and napoleon filling, arranged with incredible decorative art and care. And it tasted fantastic.

As I’ve said, Bittersweet is immense. There is a very large outdoor garden, and an indoor area that’s broken up into smaller sections, providing anything from an intimate little table for two to a banquet-style table that probably seated thirty people. It’s typical large-scale California restaurant décor – lots of mirrors, glass, dramatic decoration, low light – sort of dramatic, but nice.

Amazing. First of all, our server was named Scout, presumably after the heroine of “To Kill a Mockingbird” which won her many points right away. Second, she was an absolute expert – knew the menu cold, charming, efficient, not intrusive, and really experienced. Really professional, without making a production out of it.

Not cheap, but not outrageous -- $115 for two, including drinks and dessert. Reasonable portions – nothing out of control.