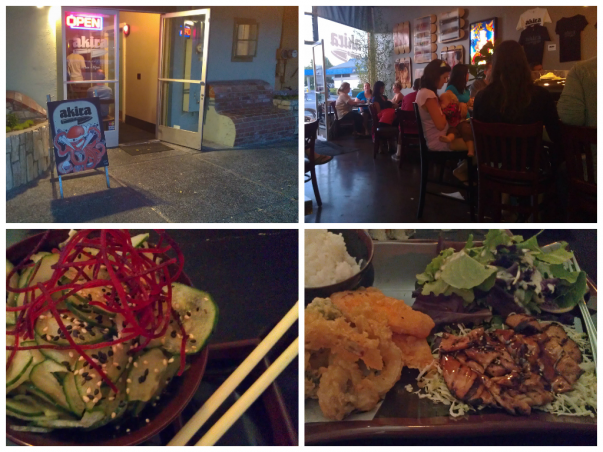 They get their basic minimum on the dot

Akira is not the place to go in Santa Cruz if you are either a) in a hurry; or b) hard of hearing. Otherwise, it’s fine.

The restaurant is located in one long room, with an entrance in the back, and another in the front. Which end is which isn’t always clear. And when I say one room, I mean one room. Everything is in there – the kitchen, the sushi bar, the grill, the dishwashing station. Everything. All the interior surfaces are also hard – there is no fabric anywhere, and nothing to dampen noise. As a result, the place is LOUD. At 9:00 on a Friday night, with a full house, you have to raise your voice to be heard, and lean forward to hear.

When Akira is full, it’s also kind of slow. This isn’t the servers’ fault, but a byproduct of the layout. There simply isn’t enough room, which means that the sushi/roll-making area, where most of the action happens, only has three people working, and they’re constantly distracted by the customers sitting at the bar and chatting with them. Result = sort of slow service. When Akira’s busy it just takes a while to get the food out of the kitchen. Be prepared to wait.

The décor is modern, with interesting little touches on the walls – Japanese art, arrangements of skateboard decks, that kind of thing. Unless you’re sitting right in front, there isn’t a lot of light, which isn’t necessarily a big deal. It’s well-lit, and attractive. It’s just REALLY LOUD.

Akira is on Soquel Avenue, just past Seabright. There’s not a lot of on-street parking, but you’re right next to the Whole Foods/Rite-Aid building, so there’s a lot of free parking a short walk away. It’s also very close to the Rio, in case you’re going to an event there.

As I’ve said, Akira is casual, busy, modern and loud. There was a broad spectrum of customers, from mommies out with their kids for a fast dinner to college kids on dates before heading to the Rio. Eclectic modern décor, interesting lighting.

Fine. The waitstaff knew what they were doing, and did a pretty good, fast job, everything considered.

Very reasonable -- $42 for dinner for two, including drinks for two. It’s Japanese food, however, so the portions are modest.

The food is good – typical California Japanese. Lots of different varieties of rolls, tempura, simple salads, that sort of thing. Not a lot of sushi/sashimi – they have it, of course, but they don’t specialize in it, and they’re more focused on lower-cost dishes.

As an appetizer we ordered a cold cucumber salad, in a vinaigrette sauce. The visual presentation was terrific – sliced cucumber garnished with beet and sprinkled with sesame seeds. The salad was good – I love cucumbers – but the salad hadn’t been properly drained, which meant that the cucumbers on the bottom were swimming around in a combination of oil and water. Not good.

We ordered the bento dinner, which included deep-fried vegetables, rice, chicken teriyaki and a salad. The rice was flawless, of course – this is a Japanese restaurant, and if they can’t manage rice, then there’s no hope for humankind. The tempura was good – the batter was light, and perfectly done. However, although the vegetables were good, the seafood, particularly the prawn, was somewhat bland, and had that frozen-then-thawed taste and texture. Not particularly bad, but also not fresh. The salad was simply a pile of greens, and the teriyaki chicken was good, but also fairly dry – overgrilled.

We also ordered two different kinds of rolls, one a simple roll with tuna and avocado, and the other a more complex creation with salmon and avocado. Both were excellent. The rice was perfect, the tuna and avocado were broth fresh and delicious, and the entire presentation was lovely. Good work, Akira.

The bottom line with this place is that as long as you stick to the simple stuff, which they know how to do, and aren’t bothered by noise, it’s a good, fast, reasonable choice for a quick, fun Japanese meal.