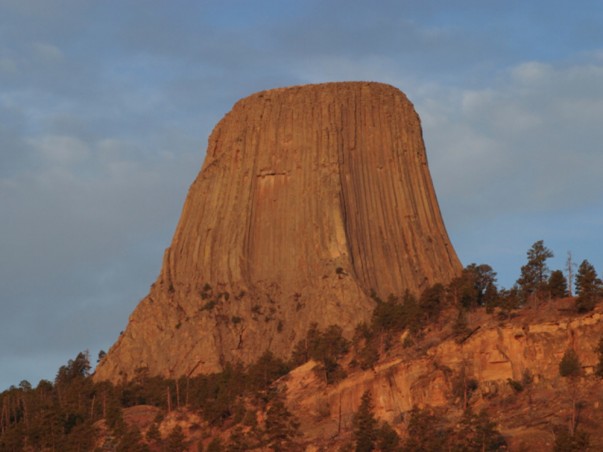 Facts about Devils Tower at Wyoming, US

Devils Tower is a gigantic natural rock formation in the Black Hills in Crook Country (Wyoming) that looks like a tall tower-shaped monument amidst a picturesque terrain. Covering an area of 1,347 acres, this 1,267 feet tall fascinating geological creation is a declared National Monument since 1906. Natively known as ‘Mato Tipila’, its name was a product of a misinterpreted translation heard by Colonel Dodge, in 1875. The translation was ‘Bad God’s Tower’ that was later shortened to Devils Tower.

Devils Tower is renowned all over the world for its adventure-led offerings. It is not only a great site for camping, but its towering height and parallel cracks of various difficulty levels make it an exhilarating experience for climbers and trekkers. The natural monument receives visitors every year especially during the summers to take a hike or climb to the summit of the Devils Tower, which is over 5,000 feet above sea level.

Located near the Belle Fourche River that waters the nearby National Park, the Devils Tower holds historical and cultural significance for the people living around the giant rock. According to a study by the National Park Service, the area around Devils Tower is home to more than 20 Native American Tribes, six of whom consider the rock sacred. These include Shoshone, Arapaho, Lakota Sioux, Kiowa, and Cheyenne. They are known to name the Tower in various ways, like 'Bear Tipi' by Arapaho, 'Bear’s Lodge' by Cheyenne, 'Grizzly Bear Lodge' by Lakota, and 'Aloft of the Rock' by Kiowa. Devils Tower, for them, is considered as a place of worship. They make offerings of cloths and items in bundles and perform dance rituals at its base.

An impressive structure protruding out of the prairie lands and surrounded by the Black Hills, the Devils Tower formation is considered a mystery by scientists. According to a Native American legend, the rock rose up to save seven little girls from a large bear. Bear claws are still spotted by visitors making the story almost believable. Scientifically though, the Tower has been a subject of study for a long time. Some geologists believe that the natural monument is the inner solidified molten igneous rock of an extinct volcano whose outer sedimentary layer was eroded naturally. The magma components that make up the Tower, like feldspar embedded into the light-colored phonolite rock, are indicators to the geologists’ statement. A recent study theorizes the Tower to be an ‘eroded laccolith’, which is a slow-cooled hard igneous mass that reaches the surface by intruding into sedimentary rock.

If you are wondering why this massive ‘single’ rock or 'monolith' has a plural name, Devils (instead of Devil’s), here’s your answer - this was a clear honest mistake in the official documents that were signed by the then President Roosevelt to declare this as a National Monument in 1906. The mistake in spelling was never corrected and for the past century and more, we still write it as ‘Devils Tower’ and not ‘Devil’s Tower’.

Once you have entered the National Park after paying the entrance fee, you can find a number of little prairie dogs coming as near as 10 feet to greet you. The three-miles gap between the entrance and the parking area is a great opportunity to see these cute creatures with their families of small puppies in the Prairie Dog Villages. You can enjoy them from a distance. Going very close to them would be a bad idea. They are known to bite and can infect you with fleas!