Greeting Traditions: How to Say Hello in Different Languages 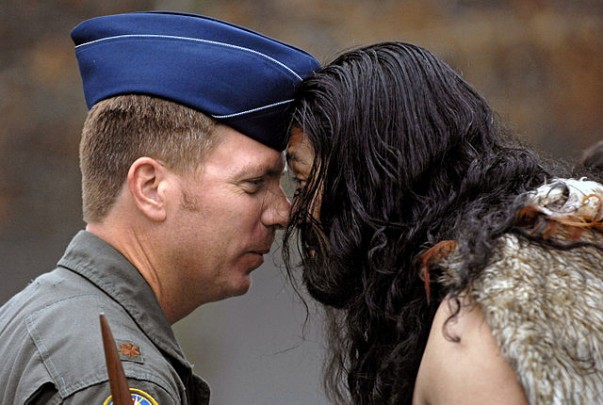 Imagine you are meeting a friend from France. You rush forward for a jolly good hug. Unnerved your friend immediately pulls back and tries planting a kiss on your cheek- awkward much? French people kiss lightly on the cheeks when they meet- something they call ‘faire la bise’. In fact, the French dictionary supposedly, has no word for ‘hug’.

Greetings around the world can vary vastly- more than we can imagine possible. Fed on a diet of Hollywood movies, generations have grown up believing that a handshake and a hug, are the universally accepted standards of greeting people. But is that really true? Let us see.

Chinese bring their right fist against their left palm with both the elbows pointed out-something commonly seen in the martial arts movies of Hong Kong.

Nowadays, however, many shake hands in the American style. Body language differs, though. If you shake hands with someone of a bigger stature, you bow your head slightly to acknowledge his position.

Significance: The closed fist signifies strength and courage, while the open palm shows that temperance and wisdom to maneuver the strength.

The manufacturing hub of the world,
We are a rising power.
We balance our strength with wisdom,
And with patience, build our empire.

Indians clasp their palms together in front of their chest, and bend slightly in acknowledgment. This is accompanied by the word ‘Namastey’.

Significance: Derived from the classical Sanskrit word Namaha, the words Na Ma mean ‘not mine’. By this, the greeter, actually reduces his ego and acknowledges the presence of another. Remember though that the Namstey is essentially a Hindu way of greeting.

A clasping here, a bowing there,
A smile mounted on a dimpled chin,
A beautiful ‘Namstey’ because we are happy deep within.

In France, you shake hands and plant a kiss on the cheeks of the person you greet- something called ‘faire la bise’.

Significance: Faire la Bise is just a mark of affection. It is considered more formal and appropriate than a hug.

With so much kissing going around,
And romance thrown freely about,
No wonder one dainty heart after another-
Finds a lover devout.

First off, men and women do not greet each other in public. It is considered really impolite (read obscene) in many Arab countries. Men greet each other with a long handshake, and if they are close, with a hug and a kiss on the cheeks. People here, really love to shake-hands. They shake hands every time, even if you are meeting for the tenth time in a day. Rise while shaking hands, if you are seated. Do not initiate a kiss or a full- body hug  with an Arab, on your own. But if he does so, it is a sign he likes you.

Never ever use your left hand to shake hands with an Arab, as the left hand is considered unclean. In a large group, it is also polite to greet each person individually.

Left is sullied, right is fine,
To interact with women we decline,
Let's shake hands and kiss on the street,
Then treat you to some camel meat.

Russians shake hands like they are going to war. They take your palm and squeeze it so hard, you can hear your knuckles crack. All the while transfixing you with their blue eyes.

With women, thankfully, Russian men are more gracious. They kiss them on the cheeks. Once, even twice is not enough. It has to be three times on alternate cheeks. Some even stoop to a low bow, and with a flourish, kiss the hands of the lady.

We are a nation of sturdy men-
The largest nation of all,
Harsh winters protected our land;
From the conquerors- Napolean, et al.

If you thought that French love kissing, take a trip to the Netherlands. Here you will find kissing, kissing and more kissing, of course- within a set of rules. Dutch women are more prone to kissing than men- right cheek, left cheek and right cheek- is the custom followed. While women kiss both men and women, men kiss only women, and rarely other men. Unless, of course, they are family or close friends.

How do I love thee
Let me count the ways-
One kiss, two kiss, three kiss,
On one of your melancholy days.

Eskimos greet each other by rubbing their noses. It is called kunik. They press their nose and upper lip against the cheek or forehead of another as a mark of affection. As funny as rubbing noses may sound, this is actually the most natural form of greeting someone you love. What do you do when you get home from a long day at work and your child comes running to you? Don't you lift your little darling and press your nose and lips against her cheeks? And if she is in a playful mood, don't you two rub your noses together?

Significance: Eskimos live in such extreme cold that they remain covered from head to foot, with only their eyes and noses exposed. Naturally, rubbing noses seemed the best option to greet another person.

Bitter cold winds blow
We make dwellings in the snow,
A nudge on the nose, a peck on the cheek,
Is all we need to keep the fire aglow.

Maoris from New Zealand greet one another using the Hongi. The Hongi is a greeting where you press your nose and foreheads against the nose and forehead of the person you are greeting. Often, it is accompanied by a handshake.

Significance: Maoris believe the Hongi is an exchange of ‘Ha’ or the breath of life.

Kia Ora! Come do the Haka dance,
Or join us in our Hangi,
We promise you a pretty pendant,
If you rub noses in our Hongi.