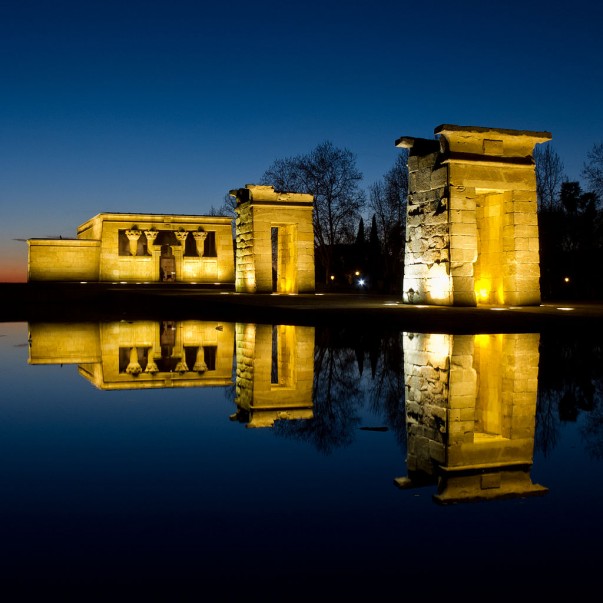 Temple of Debod in Madrid, Spain

The Temple of Debod is situated in Madrid, just five minutes northwest to Plazade Espana. This takes the travelers to a place, which is home to the most beautiful historical landmark of the city.

The Temple of Debod was originally built in the Nubian town of Debod in order to honor the gods, Amon and Isis. King Meroe Adijalamani ordered for the original structure to be built. Later the kings of the Ptolemaic dynasty expanded the chapel by building several chambers to the temple. Even Roman emperors of the stature of Augustus helped complete the construction of the Egyptian temple.

In the year 1960, the Temple of Debod was threatened by the construction of the Great Dam of Aswan. Later that year UNESCO made an international appeal to help save all the historical and archaeological monuments near the site where the dam stands. The government of Spain immediately responded by rescuing the temples of Abu Simbel in Nubia. In the year 1968, the Egyptian government thanked Spain by sparing the Temple of Debod in return.

The temple was rebuilt in Parque del Oeste and reopened to the public in the year 1972. The temple is situated in a beautiful park away from the hustle and bustle of the city.

The temple has loads of invaluable treasures stored within its premises. It is not what lies outside, but what lies inside that mostly attracts the tourists.

Tourists who have an active interest in ancient art and architecture will find this temple fascinating. Once inside the Temple of Debod, you are likely to see plenty of statues of Egyptian pharaohs and hieroglyphics. Quite surprisingly, unlike a few other historical monuments, tourists are allowed to click pictures without using the flash.