Home » What's So Interesting about the First Glass-bottomed Bridge in China?

What's So Interesting about the First Glass-bottomed Bridge in China? 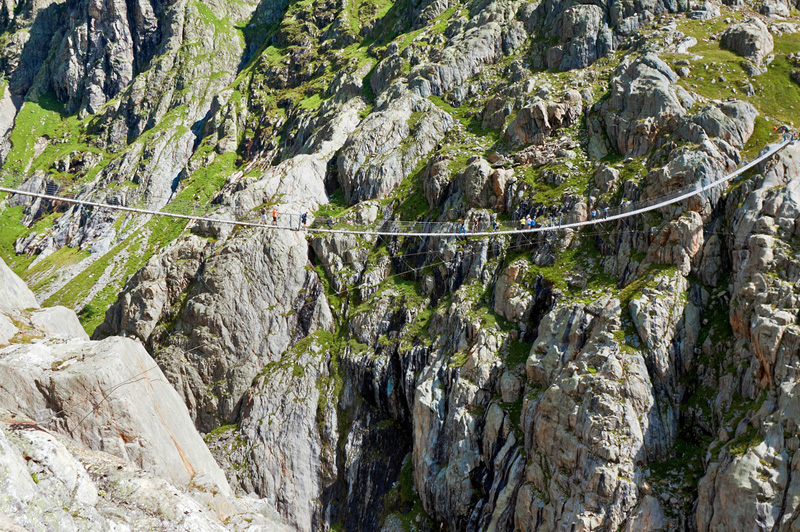 The newly built glass-bottomed suspension bridge at Shiniuzhai Geological Park is a spectacular structure offering an awe-inspiring view of the vertical drop of the cliff and mist.

China and its fascination for glass structures go back a long way. When a horseshoe-shaped glass walkway in Chongqing was dubbed as the longest cantilever bridge in the world this summer, the world expected more surprises. It came in the most thrilling way possible. The newly built glass-bottomed suspension bridge at Shiniuzhai Geological Park is a spectacular structure offering an awe-inspiring view of the vertical drop of the cliff and mist.

Here are some interesting tidbits about the world's longest and highest glass-bottomed bridge that will tempt you to conquer fear and take the high road:

#1. Although the name of the 'Brave Men's Bridge' might sound tad offensive to women travelers, one has to accept the fact that you need a nerve of steel to stand on the glass bridge when you know you have a long wobbly walk ahead and there's about a 600-ft-steep drop below.

#2. The bridge, which had previously been a wooden overpass connecting two peaks of Stone Buddha Mountain, has been painstaking recreated into what it is today. For the last few months, 11 engineers have been working toward making this transformation happen. From reinforcing the structure with additional steel cables to replacing wooden planks with glass panes, the entire process was done manually.

#3. What should dispel fear among the travelers is the fact that glass used for the bridge is 25 times stronger than a regular window pane. Each window pane, which can withstand any impact, weighs 140 kg (22 stones). The reason why engineers can vouch for the safety of the bridge is the dense steel structures beneath it. This minimal-looking bridge is believed to have the strength to withstand strong winds, frost, and earthquakes. On any given time, 800 visitors can cross the bridge.

#5. If you have looked at the Arkansas River from the Royal Gorge Bridge in Colorado, you know what it takes to glance down when you are at the top. The vast expanse below and the surrounding splendor give that rare thrill. This 984-ft-long bridge, which hangs between two cliffs, offers breathtaking views of the Stone Buddha Mountain and the Shiniuzhai Geopark featuring rare plants and ecological diversity.

#6. Hunan province in South China, the home to this transparent suspension bridge, has several glass skywalks to its name. In April 2015, a glass walkway was opened above 2,300-ft-high cliffs in Chongqing. A month later, visitors to the beautiful Tianmen Mountain could walk along its edges, thanks to a new walkway built on the summit.

#7. This pedestrian bridge crosses over the canyon that had arguably inspired the famous Hallelujah Mountains in James Cameron’s Avatar.

#8. According to the Israeli architect, who first conceptualized the structure, the glass bridge was deliberately made transparent to create a feeling that “a white bridge (is) disappearing into the clouds.”

#9. For those who think that walking across the 'Hero Bridge' can't be considered thrilling enough, the plan is afoot for introducing the highest bungee jumping facility in the world. This suspension bridge is likely to host fashion shows as well.