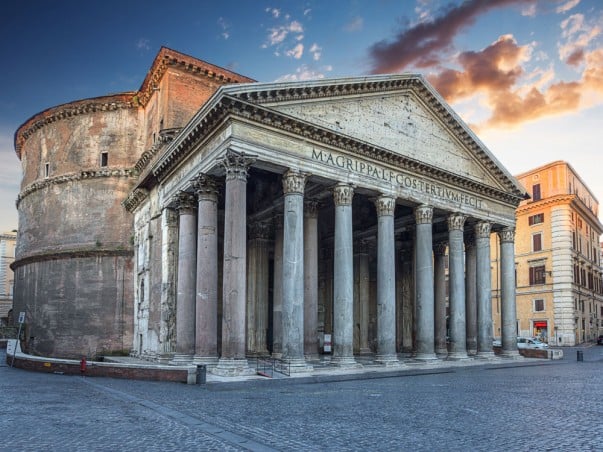 The Pantheon in Rome

An ancient Greco-Roman architectural marvel, the Pantheon, Rome is a gigantic temple-turned-church in the Piazza della Rotunda. Literally meaning the Temple to honor all Gods, the Pantheon, in its over 1800-year existence, has been built three times, was a temple of all the Roman Gods, and then was a church with an alternative name, the Basilica of St. Mary and the Martyrs. In the present times, although a fully functioning church, it draws global visitors irrespective of their religion. A fascinating architectural creation, the Pantheon influences architects worldwide for its impressive design and advanced-level engineering. This has led to many inspired buildings, like the US Capitol and the Jefferson Memorial in the US, and the Villa Almerico-Capra in Italy.

Interesting Facts about the Pantheon, Rome

The Pantheon, Rome has been standing since 126 AD. This architectural wonder was commissioned by Emperor Hadrian on the site where there were already two attempts at building a Pantheon. The challenge for the architects was to build a structure that would stand the test of time. This led to the building of one of the greatest architectural accomplishments of the ancient Romans. The Roman Pantheon that stands today looks almost the same as it was when it was completed. Its stone pillars, giant bronze gates, and cylindrical interior with unreinforced dome of the same diameter as the room’s mid-height (142 feet) create an awe-inspiring look. A difference between the Pantheon in 126 AD and that of the present is the absence of the gilt bronze from the pediment, which was stripped off to be used in building the ‘Baldachin’ at St. Peter’s Basilica (Vatican City).

The portico of the Pantheon is an impressive pillared structure arranged in three rows, eight in front and four each in the other two rows. The stone pillars are believed to have been brought from Egypt by using wooden flanks to float them on water. The upper triangular pediment is believed to be a part restored from the original Pantheon of 27 BC, built by the then Emperor Marcus Adrigga.

Enter through the gigantic bronze gates inside the Pantheon and you will understand why this world’s largest unsupported dome is a subject of study for architects and engineers. Made of concrete, the walls of the cylindrical chamber are about 25 feet thick! This gives support to the massive semi-spherical dome above. The dome ceiling looks coffered with a circular opening (oculus) at the top. An interesting fact is that varying compositions of concrete were used by the architects to make the dome structure lighter and thinner. The oculus is also responsible for providing stability to the dome, apart from filtering light into the room.

While in the inner chamber of the Pantheon you can look around the enormous room with its original ancient marble flooring with small drainage holes, high altar, art works by different artists, and a number of tombs of well known personalities. The most notable art works here include a sculpture named ‘St. Anne and the Virgin’, a gold-blue mosaic design on a small dome, and a fresco depicting the ‘Annunciation’. The tombs include those of Italy’s Father of the Nation, Vittorio Emanuele, and Raphael, one of the greatest Renaissance artists.

Just outside the Pantheon is a fountain about 14.5 m high. It is well known for its obelisk in the centre that was placed by Pope Clement XI in 1711. It was originally built by Ramses II for the Temple of Ra in Heliopolis in Egypt.