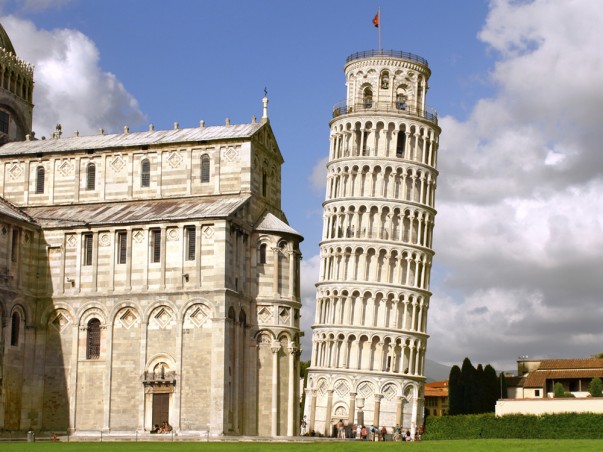 The Leaning Tower of Pisa, Italy

An awe-inspiring architectural wonder, the Leaning Tower of Pisa is a 183 feet tall white-grey marble bell tower in the west coastal Italian town. This magnificent structure was built as part of a cathedral in the Romanesque architectural style, which is recognized for its semi-circular arches. Famous all around the world for its slant, the Tower (Torre in Italian) has been instrumental in catapulting Pisa as a must-see destination for global tourists.

A historic miracle in an ancient seaport town, the Leaning Tower of Pisa, to a creative eye, looks like a gigantic tiered cake, similar to those seen in weddings. It has eight circular stories with 294 steps that one can easily climb in a short span of time while admiring the arches, slanted view of the surroundings, and reach the pinnacle to the ancient Assunta bell.

The Leaning Tower of Pisa (Torre pendent di Pisa) was built as a ‘campanile’ or an independently standing bell tower in a religious building compound, named Piazza dei Miracoli (better known as the Field of Miracles), which is now a World Heritage Site. This compound has several other white-grey marble buildings including a Baptistery, Cathedral Square, and Church Yard. They display some of the best known art works created in Europe in the medieval era.

The building of the Tower of Pisa began in 1173 and was completed in 1399. This span was intermitted by wars between Pisans and neighboring rival states like the Genoans, debt, and the architectural difficulties faced by architects and engineers building the tower. The architectural difficulties were caused due to the weak foundation of only 10 meters deep and the soft clayey sediments there that made the structure unstable and slanted. The engineers tried straightening and stabilizing the Tower by increasing or reducing the height of the arches on each story, but the Tower neither stood straight nor fell. In fact, the Tower is leaning for the past almost 800 years and has still not fallen. The Leaning Tower of Pisa is a study for engineers, architects, and mathematicians who are trying to find ways to stabilize the structure and prevent the 1 mm per year fall of this great work of Medieval European architecture.

While waiting for the officials’ call to climb the Tower, tourists can best spend their time walking around the complex of Piazza dei Miracoli and looking inside the magnificent Cathedral (Il Duomo), Baptistery, Church Yard (Campo Santo) and the Museum, which houses art works that adorned the walls of the Cathedral and the Baptistery in the ancient times.

Wondered how the Father of Modern Science propounded his Falling Bodies theory? This native citizen of Pisa carried out his experiments by dropping balls of varying masses from the top of the Leaning Tower. Be a part of this scientific history by walking up the steps of the tower.

If you thought that the Tower of Pisa was the only leaning structure in the world, you are up for a challenge. Owing to the loose soil in the Tuscany region of Italy, many of the towns around Pisa have slanting bell towers adjacent to Romanesque styled cathedrals. The Leaning Tower of Pisa is considered to be the largest among them.