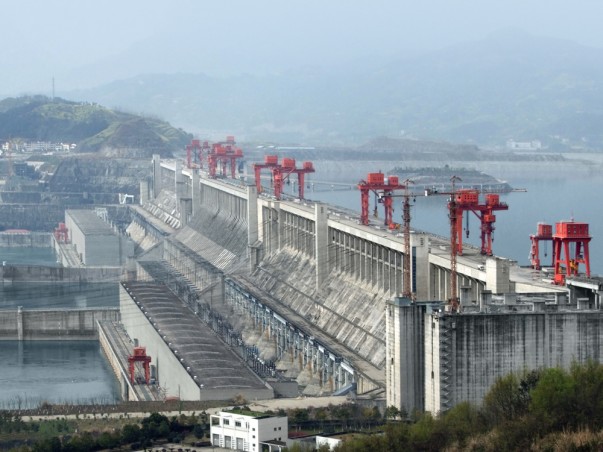 The Three Gorges Dam on the Yangtze River, is a wondrous man-made structure of the 21st century. This humungous creation on the longest river in China (and Asia), was made fully operational in May 2012 and stands as the largest hydroelectric dam on the planet. The earlier dam that held this distinction was the Itaipu Dam on the Parana River on the Brazil-Paraguay border. Itaipu has an installed power capacity of 14,000 megawatt (MW), which was overtaken by the Three Gorges Dam with 22,500 MW.

Considered as a historic event in the field of civil engineering, the Three Gorges Dam has attracted the attention of tourists visiting Sandouping in the Hubei Province in China. The Tanzi Ridge, on which the Jar Hill Observation Platform is located, is the highest point from where tourists can see the Dam with all its grandeur and picturesque surroundings.

The inception of the Three Gorges Dam happened over 90 years back, when the pioneer and the first president of the Republic of China, Sun Yat-sen wrote about a dam across the Yangtze River, helping to conserve water and produce about 22 GW hydroelectric power, in his book The International Development of China. Since then, with subsequent government backing, several surveys and anticipated plans, the project began to take shape in the mid-20th century. A significant event in the history of the Three Gorges Dam Project was the support given by the founding father of the People’s Republic of China, Mao Zedong. He wrote a poem in 1956, named ‘Swimming’, to reiterate the importance of a dam on the Yangtze River, after it experienced a catastrophic flood in 1954. Finally construction started at the end of 1994 with expected full operations in 2009. The project got delayed due to the addition of six more generators in the underground power plant.

The Three Gorges Dam, after completion stands 185 meters above the sea level and is 2,335 meters in length. It was made using steel (463,000 tonnes) and concrete (27.2 million cubic meters). The whole project has cost about $37 billion and approximately 1.3 million people have lost their homes and were re-located to different places. The Three Gorges Dam project has not only cost money, it has also destroyed and submerged 1,300 villages, 13 cities and 140 towns. This, although, is considered less than the price paid in the loss incurred almost every year due to Yangtze River floods. After all, China has had about 215 destructive floods in the River in the past 2,000 years.

There are a number of tour agencies offering day tours to the Three Gorges Dam. You can enjoy the stark difference of the tranquil and plunging waters on two sides of the dam here. The 185 Terrace on the north of the dam provides a great view of these waters. The Jar Hill Observation Platform shows a model displaying the entire hydroelectric project. You can also learn more about the history of the dam’s construction in the south bank, in the Park of River Closure.

Is the Electricity Crisis Solved?

The Three Gorges Dam, on paper, was slated to solve 10% of power problems of China. However, with the increase in population, food and industrial demands, this dam will be only able to solve 1.7% of China’s electricity problems (as per a report published in 2011). It is no wonder that the government is planning much larger hydroelectric projects for the future.

With the destruction and submerging of nearby areas for creating a reservoir for the Three Gorges Dam, a number of issues have emerged. These include damaging of the habitat of over 6,000 plant species, and endangering lives of water dwelling species due to rise in the water temperature. These water dwellers include the Chinese River Dolphin and the Yangtze Sturgeon. In addition, it is believed that 1,300 archaeological sites were destroyed by the creation of the dam and the reservoir.

Here is an Interesting Video on Three Gorges Dam that we found on the Internet :
[youtube http://www.youtube.com/watch?v=Gvj7rGqHzdM&w=600]Published On: Monday, November 11th, 2013