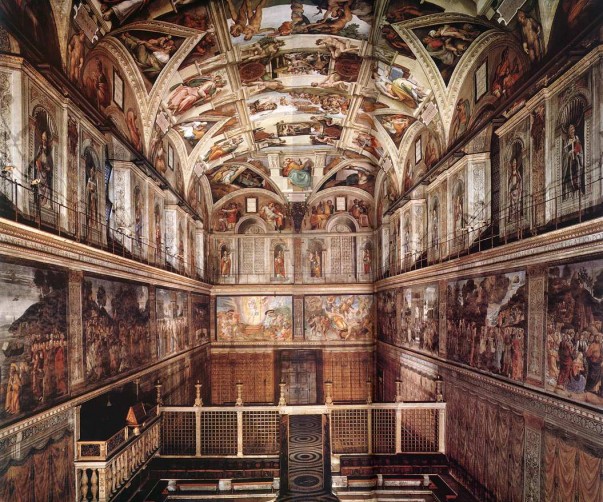 A sacred place for Christians from around the globe, the Sistine Chapel in the Vatican City is one of the most visited tourist destinations in Europe. It receives more than five million tourists each year and almost 25,000 each day. The Chapel is best known for its wall-to-ceiling frescoes, especially those painted by Michelangelo, who is considered one of the greatest artists in the Renaissance era. The Sistine Chapel is part of the Pope’s official residence (Apostolic Palace or the Palazzo Apostolic Vaticano) and it also hosts the world famous Papal Conclave, an event organized to elect the next pope.
Tourists in Vatican City usually visit the Sistine Chapel along with other rooms in the 5.5 hectare complex of the Apostolic Palace. Setting foot inside the Chapel transports one into the pages of the Holy Bible. Its beauty, grandeur, and sense of divine power have enchanted visitors globally.

The Sistine Chapel was built between 1477 and 1481 on the behest of Pope Sixtus IV, on the site where the Great Chapel or the Cappella Magna stood earlier. The name ‘Sistine’ (Sistina in Italian) was derived from the Pope’s name’s Italian version – Sisto. The Chapel’s main structure was inspired by the Temple of Solomon’s description in the Old Testament. The outer façade of the chapel was kept plain without any sculpture or painting. But the Pope brought in some of the best-known artists in those times (namely, Perugino, Botticelli, Rosselli and Ghirlandaio) to adorn the walls inside with paintings depicting stories from the Holy Bible. One side of the wall was painted with stories of Moses and the other side depicted Jesus’ life. In addition to the walls, the floors and pavement were decorated as well. These have multicolored geometrical and circular mosaic designs.

The first thing that tourists do on entering the Sistine Chapel is look up. The intricately painted ceiling you see was not always the same. During the papacy of Pope Sixtus IV, the ceiling resembled that of the sky with shining golden stars (painted by Piero Matteo d’Amelia). However, a few years later, it showed large cracks due to massive ground digging to build the Basilica of St. Peter nearby. Pope Julius II in the early 16th century brought in the architect Bramante to repair the damage. He also got Michelangelo (who was building his tomb with 20 sculptures until then) to paint the ceiling. Michelangelo considered painting to be an ‘inferior art’. He is said to have described the then ceiling as a ‘barn’s roof’. The Pope challenged him to turn this into a ‘jewel of Vatican City’. Michelangelo accepted the challenge.
It took him four years and three months, terrible back and neck-ache, and eye damage to complete painting the over 5,000 square feet of the Sistine Chapel’s ceiling. He painted his interpretation of the stories from the ‘Book of Genesis’ dealing with the Creation and Noah. The most famous fresco here is the one in the middle of the ceiling, known as the Creation of Adam. An interesting fact about the ceiling frescoes is that, even though Michelangelo did all of the sketching, ideating and most of the paintings, he had assistants to take care of the paint mixing and finishing the fresco details. He is known to have fired his assistants frequently so that no one could take credit for any particular part.

When you reach the altar you will find another artwork that can evoke a sense of wonder – the large painting called The Last Judgment. It was painted between 1535 and 1541 by Michelangelo (again!) on the request of Pope Paul III. This painting depicted the biblical Apocalypse, which is also known as the ‘Second Coming of Christ’. This fresco can come across as scary and gloomy with paintings of tortured men and women, and an angry face of Christ in the middle with a sad Virgin Mary beside him. An interesting fact is that Michelangelo originally painted the humans nude! They were later painted over with clothes in different colors.