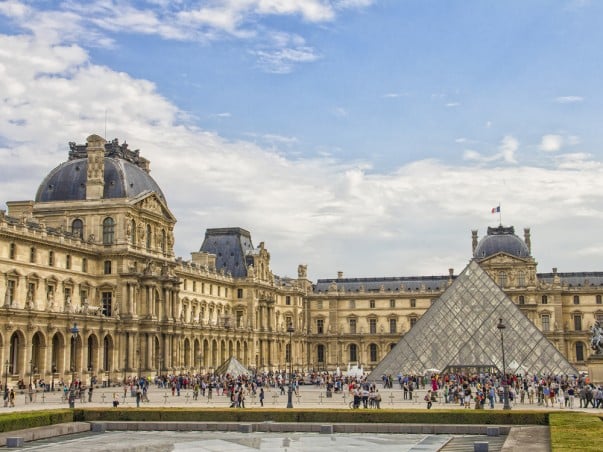 Louvre Museum and its Pyramid at Paris, France

An imposing Parisian landmark, the Louvre Museum exhibits some of the best art works in history, like Mona Lisa, Virgin of the Rocks, and Venus de Milo. It is no wonder that the museum receives about nine million tourists yearly, which makes it the most visited museum in the planet. Le Musée du Louvre, as it is referred to in French, the Louvre Museum since the late 18th century has been exhibiting interesting and exciting works of art by the most celebrated names in the arts community, including Leonardo da Vinci, Raphael, Eugène Delacroix, and Michelangelo.

A must-visit destination for art lovers globally, the Louvre Museum boasts of a permanent exhibition of 35,000 art works across 15 acres. It has other antiquities as well spanning ancient civilizations to objects owned by the French royals to depictions of various wars. The attraction of the Louvre, thus, is such that it is part of every tourist’s itinerary.

Located at the heart of the city of Paris, France, on the right-bank of the Seine, the Louvre stands as one of the largest and most famous museums in the globe. It was built initially as a fortress for King Philippe Auguste in the 12th century AD, and four centuries later demolished and reconstructed as a royal palace by King Francois I. The transformation of this royal residence to a museum happened when King Louis XIV decided to live in the Palace of Versailles. The Louvre opened in 1793 to the public to originally show 537 paintings collected by the royal family. Down the years, collections have increased. In the present, the Louvre Museum boasts of over 380,000 items comprising paintings, sculptures, jewelry, and other historic articles and antiquities.

The Louvre Museum has eight departments showcasing arts and artifacts from the pre-historic times to the 19th century.

The Louvre Pyramid is a glass and metal pyramidal structure that serves as the entrance to the museum. It was designed by the famous architect I.M. Pei, famed for his John F. Kennedy Library in Massachusetts. This made him the first architect from outside France to work on the Louvre.

Owing to the extreme increase of items displayed in the Louvre Museum, French officials decided on building more museums under the Louvre name. You can visit the one at Lens, in northern France (200 km from Paris). There is another Louvre coming up in Abu Dhabi that is planned to open in 2015.

Get more information about the museum like hours, tickets & more, visit Louvre Museum