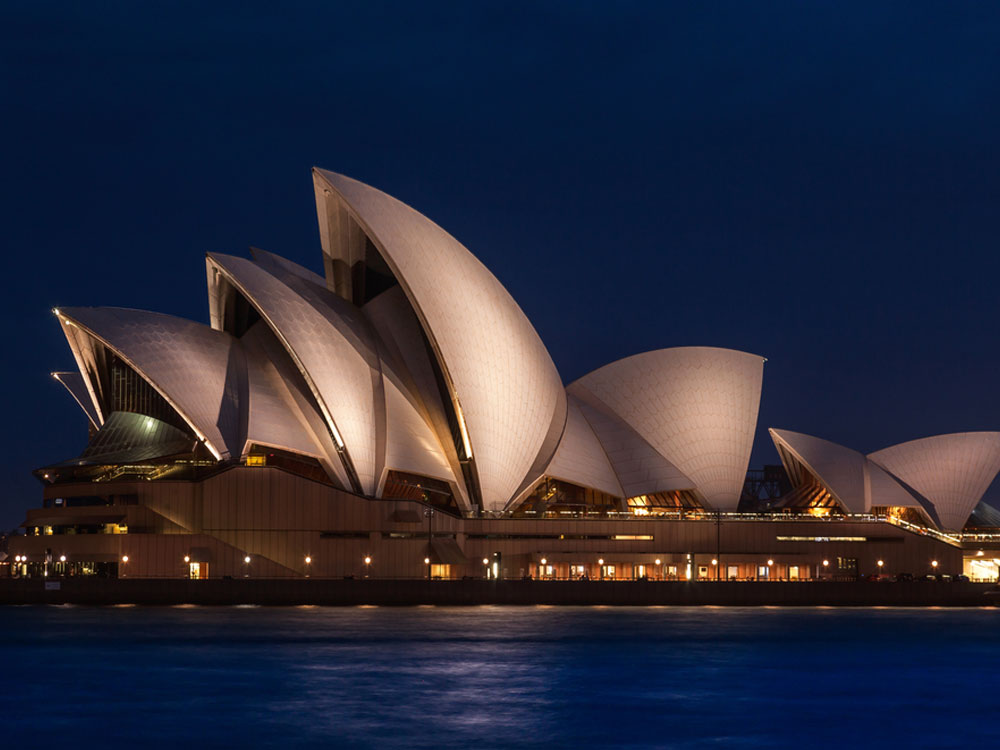 A global icon for Sydney and Australia, the Sydney Opera House is a performing arts center at Bennelong Point in the city. Replete with a comparatively-new-but-rich history, this beautiful building is home to some of the greatest venues in the world for showcasing music, dance, theater shows, ballet, musical dramas, etc. Hosting more than 1,800 events per year in front of a collective audience of over 1 million, the Opera House has seven sections or performance areas – Drama Theatre, Opera Theatre, Concert Hall, Playhouse, Studio, Utzon Room (earlier known as the Reception Hall) and an open-air Forecourt. In addition, it boasts of world-class cafés, restaurants and bars, like the Bistro Mozart, the Opera Bar and the Guillaume at Bennelong. Overlooking the magnificent Sydney Harbour Bridge, the Opera House is among the top sightseeing attractions for global tourists in the Down Under (Australia), receiving over 8 million tourists annually.

A cultural symbol for Australia, the Sydney Opera House was called a ‘masterpiece by a human creative genius’ by UNESCO, while they adjudged it a World Heritage Site (2007). The building complex is managed by a trust under the New South Wales Government.

The idea of an Opera House was first born in the 1940s when a musical conductor named Eugene Goossens approached the government for building a place that will showcase big musical productions. After years of lobbying, the government finally agreed to hold a building design competition and decided to bring down the tram shed standing at Bennelong Point to make space for the new structure. Built in about 14 years, between 1959 and 1973, the Opera House was designed by Danish architect, Jørn Utzon, whose design was chosen from a list of 233 designs entered in the Opera House international designing competition in 1956. He was awarded the Pritzker Prize (which is equivalent to the Nobel Prize in Architecture) for this building in 2003.

The Sydney Opera House is widely renowned for its distinctive design, which experts call ‘Modern Expressionist’. Its unique shell-shaped roof is made of ‘precast’ concrete reinforced with ribs made of precast concrete as well. The roof is said to have a self-cleaning characteristic; whenever it rains the water slides down taking with it all the dust and dirt! The tiles used here which have a ‘chevron’ pattern were imported from Sweden, whereas the unique topaz-colored glass was custom-made and brought from France. In total, 10,000 workers were involved in building the structure. It is no wonder that the whole project cost AUD 102 million, even though the initial projected budget was AUD 7 million. The construction was financed by various bodies including a state lottery. It was inaugurated in a televised ceremony by Queen Elizabeth II.

The first performance at the Sydney Opera House was held even before it was completed! The credit goes to concert singer, Paul Leroy Robenson, who entertained the construction workers during their lunch hour while standing on the scaffolding. He sang songs like Ol’ Man River and Joe Hill. Officially, an Opera named “War and Peace” (Sergei Prokofiev) was staged in the Opera Theatre as the first performance in the year of inauguration (1979).

The Opera House at Sydney has also witnessed performances by some of the biggest names in the arts community, including Foo Fighters, Ella Fitzgerald, Elvis Costello, Luciano Pavarotti, and Michael Jackson.

While touring the Opera House at Sydney, you must visit the Concert Hall that has a remarkable number of seats (2,679). Located under the largest ‘shell’ in the building, it is recognized for its grand appearance, and for having the world's largest mechanical organ with 10,154 pipes. This famed Grand Pipe Organ took a decade to build and install before it was ready to be played!

You may also like: Top 10 Things to do in Sydney