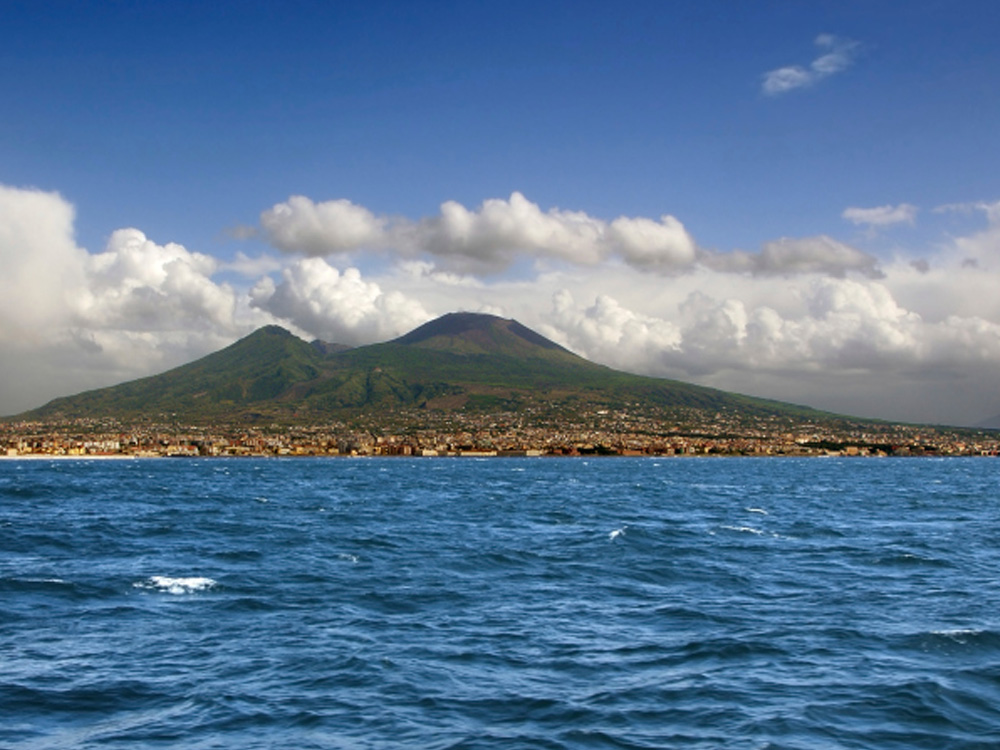 Overlooking the Bay of Naples, in Italy, Mount Vesuvius is a rather infamous mountain peak in the world. Well known for its volcanic activity, this ‘hump-back’ shaped mountain is located to the east of the historic city of Naples. One of the oldest continuously-inhabited cities on earth, Naples has been bombed the most number of times in Italy during the 2nd World War. Mount Vesuvius (known to locals as Monte Vesuvio) is about 5.6 miles away from this city.

Standing at an elevation of 4,203 feet, the summit of Mount Vesuvius features a deep and steaming crater, sign of an active volcano. Tourists climb the mountain to not only experience the adventure of being in the vicinity of an explosive opening in the earth’s crust, but also view the picturesque bay and the historic city.

Arising due to the collision of the African and the Eurasian tectonic plates, Mount Vesuvius is located in the line of the ‘Campanian volcanic arc’ that has dormant volcanic mountains like Campi Flegri and Mount Epomeo. It has been an active stratovolcano since ages, whose devastating eruptions are known to have removed entire cities and villages from the face of this earth. The most destructive volcanic activity of Mount Vesuvius is documented to taken place in 79 AD, when it wiped out two prosperous ancient Roman cities, Herculaneum and Pompeii, and along with them 16,000 people due to its pyroclastic lava flows. According to letters written by Pliny the Younger, who experienced the event first-hand, the volcano exploded in the form of a tall umbrella-like ‘stone pine’. The term ‘Plinian eruptions’, used by volcanologists today, came from Pliny’s description of the eruption. The most recent Plinian eruption was seen in 2010 in Iceland.

Mount Vesuvius has erupted a number of times since 79 AD. Due to eruptions in 1906, a major part of Naples was destroyed. This made the Italian Government revert funds saved to prepare for the Summer Olympics in 1908, to rebuild the city. Eventually, the venue of the first modern Olympic Games was changed to London. The last major volcanic activity seen in the mountain was in 1944. This eruption damaged the Funicular railway line beyond repair. The railway line was originally built in 1870. In the present, a volcanic eruption by Mount Vesuvius can affect over 2 million lives. It is no wonder that Mount Vesuvius is considered among the most dangerous volcanoes in the world.

In spite of such a disturbing history and scary future, many Italians choose to live close to Mount Vesuvius. The reason can be the fertile andesite lava soil in the lower slopes of the mountain, which facilitates the growth of the best quality fruits and vegetables. Hence, despite the history, the overwhelming landscape and delicious Italian food make Mount Vesuvius a much-visit destination in Italy.

Visiting only Mount Vesuvius is considered incomplete by global tourists. You can take any of the nine trails and enjoy the floral and faunal beauty of this national park. Declared in 1995, the Vesuvius National Park features Mount Vesuvius in the centre, Monte Somma (out of which Vesuvius arose), and the low-lying areas of the mountain.

If you like wine, tasting this one is a must in Italy, especially if you are around the mountain. Lachryma Christi, literally meaning ‘Tears of Christ’, is made from grapes cultivated on the slopes of Mount Vesuvius.

While climbing the slopes of Mount Vesuvius to reach the summit, make sure to watch out for sudden landslides. This is usually one of the first indications of a volcanic and seismic activity. Then again, landslides may be a false alarm. It is advised that you contact the local officials if you notice any volcanic indications.

« Facts about Mount Fuji Fishing Off The Galata Bridge in Istanbul »