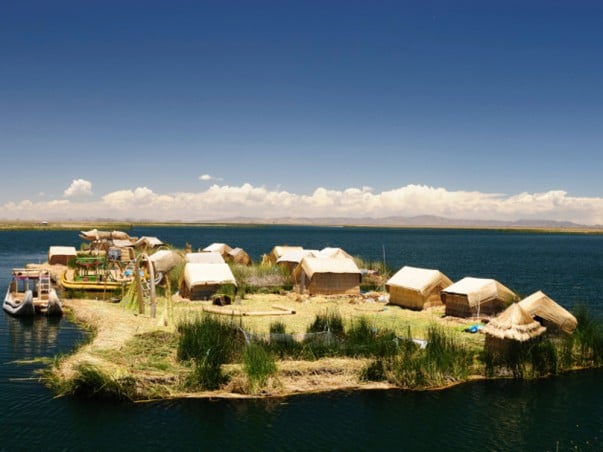 Floating Uros islands on the Titicaca Lake, the largest highaltitude lake in the world

Lake Titicaca, a landlocked lake straddled across the border of Peru and Bolivia, is widely renowned for its beauty, history, legends, and the height at which it is situated (3,810 m above sea level). Perched on the Andes Mountains, this South American lake is known around the world for being navigable even at such a height. Spread across 8,300 square kilometers and on average 600 feet deep, it is the largest in terms of volume. It is fed by a number of tributaries and nearby rivers. In addition, the lake is dotted with about 41 islands, many of which are inhabited by people who have been living here since ages.

Lake Titicaca is famous for its picturesque landscape. Surrounded by snow-capped Andean peaks, and verdant plateaus, the lake offers tourists a beauteous and exciting holiday experience. One of the top attractions here is a ride on a boat made of reeds floating on the water.

The magnificent Lake Titicaca has a unique shape. It is interpreted by the utterly imaginative as a puma chasing a rabbit. The lake actually comprises two parts – the deeper and larger appropriately named ‘Lago Grande’ that literally means a ‘big lake’, and the comparatively smaller and shallower ‘Lago Pequeño’, which of course means a ‘little lake’. The locals also call these sub-lakes as Lago Chucuito (Grande) and Lago Huinaymarka (Pequeño). These are separated by a small stream named as the Strait of Tiquina. On the whole, Lake Titicaca is owned in part by both the countries, Peru (60%; western side) and Bolivia (40%; eastern side).

Apart from the beauteous marvels, Lake Titicaca is widely famous for its myths. The locals consider it to be a sacred place. It has, in fact, been in existence for millions of years. Excavations at the bottom of the lake have unearthed objects that have helped scientists learn more about the pre-Inca and the Inca era. It is believed that the Incas mysteriously emerged from Lake Titicaca. A recent excavation near the Isla de Sol (one of the islands in the lake), in October 2013, has uncovered items made of gold, silver, ceramic and bone. These can be dated as far back as 1,500 years ago. There is also a legend about an underwater templein Lake Titicaca.

Among the best things to do in Lake Titicaca is touring the floating islands, locally called Islas Flotantes, which can be a memorable experience for you. These islands include Amantani, Uros, and Taquile. Uros, one of the most prominent, is a group of man-made floating islands made on totora reeds. It is home to people who have pre-Incan ancestry. You can experience the local farming culture and pre-Incan traditions, and see the way the natives live, up close. Several tour agents have arrangements with the natives of the islands. Even though many of the islands do not have electricity, and don’t even use any mechanical tools, they make tourists feel at home with their impeccable hospitality and entertainment-filled evenings.

The government, in order to protect the natural and cultural wealth of Lake Titicaca and its islands, declared them a national reserve. You can find several endemic species living in and around the lake at such a height, adapted to less atmospheric pressure and a low oxygen level. These include the Water Frog, and the Grebe (which is flightless).

Another top sightseeing attraction at Lake Titicaca is the Isla de Sol. Considered one of the largest islands here, this rocky island is recognized for its historical and mythical features. It has around 180 ruins dating back to the Incan period, which includes a labyrinth-like monument and a Sacred Rock. The island is also believed to be the place, where the Incan Sun God, Inti was born.

« Facts about Chichen Itza Berlin's Festival Of Lights »
One Comment