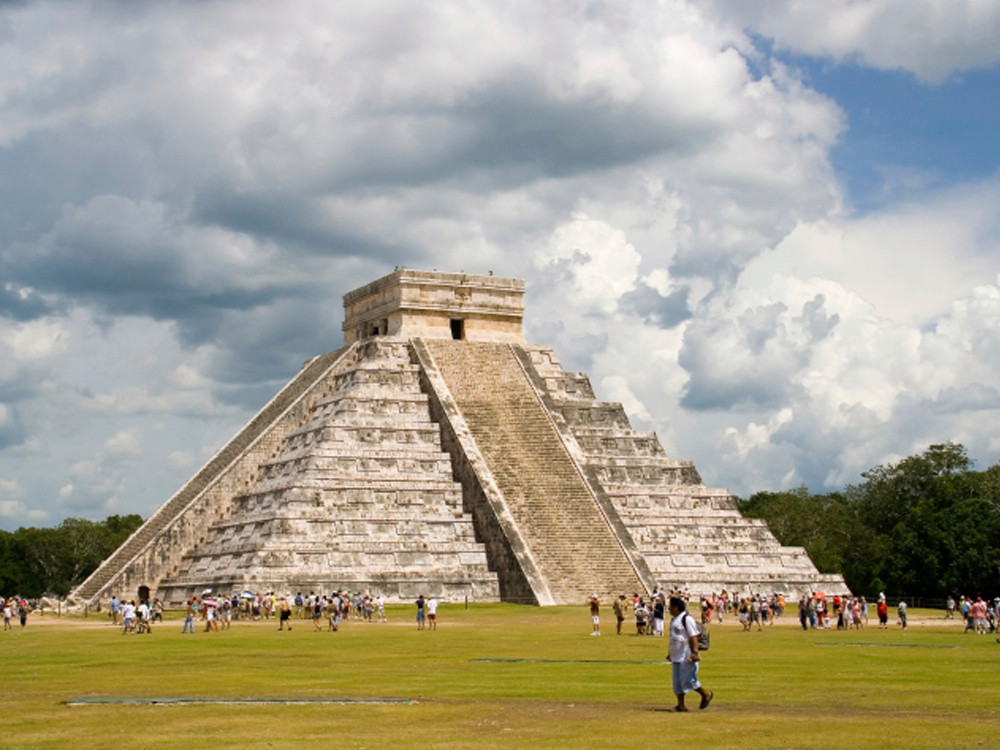 Reminiscent of the advanced Mayan civilization in the pre-Columbian period, Chichen Itza is a fascinating archaeological site in the arid plateau of the north-eastern Yucatan peninsula in Mexico. A prominent city that was continuously inhabited throughout history, Chichen Itza was an important religious site for the Mayans. Its name, literally meaning the ‘Mouth of the Well of Itza’, is derived from the natural water-filled sinkholes (better known as ‘cenotes’) in the city.

Considered among the best preserved of all Mayan archaeological sites in the Mexican peninsula of Yucatan, Chichen Itza is highly acclaimed for its stone buildings with astronomical features. Notable buildings here include El Castillo, Temple of the Warriors, Great Ball Court, Platform of Venus, Skull Platform, Osario, and El Caracol. In the present, Chichen Itza is listed in the UNESCO’s World Heritage Sites (1988), and the New Seven Wonders of the World.

Located just about 25 miles from the city of Merida, Chichen Itza is one of the many religious sites (also known as ‘temple cities’) built by the Mayans, like Uxmal, Copan, Palenque, and Tikal. Mayans were actually not an empire but a group of states based in different cities in Central America and southern Mexico. Itzas were similarly an ethnic group settled in the Yucatan area. The importance of the Mayans in history stems from the fact that they had developed a mathematical system and mapped the movement of planetary bodies, and thereby incorporating them to explain the past and predict the future. In addition, they had the only writing system in America before the Spanish conquest. Another interesting fact about the Mayans is that according their calendar, it was declared that 21st December 2012 will bring about a major change on earth. Many dubbed the day as the ‘End of the World’.

The ruins of Chichen Itza are spread across about 2 square miles on an artificially leveled terrain owing to the rocky landscape. Each temple, palace and plaza here is interconnected by ancient paved paths, which in the Mayan language are called Sacbeob. The buildings’ architectural styles are heavily influenced by the Mayans’ study of the celestial bodies. If you want proof, you can count the steps of the pyramidal-shaped El Castillo (365 in number), visit the place to see the impressive serpent-like shadows during the time of the autumn and spring equinoxes, check the directions where the windows of the El Caracol Observatory are placed (cardinal and sub-cardinal directions), and visit the Platform of Venus, the monument dedicated to the planet that was believed to have immense significance as a war god for the Mayans.

The Pyramid of Kukulchan (also known as El Castillo) and the Great Ball Court usually come on the top in your list of not-to-be-missed structures in Chichen Itza. These gigantic and highly preserved creations truly invoke a sense of grandeur in all visitors. In addition, their indications of the Mayan culture are awe-inspiring. But, apart from these, there is an interesting thing that you can try while you are there – clap once from one end of the Ball Court. This will produce a total of nine echoes distinctly at the center of the court! Fascinatingly, a clap at the Pyramid produces a chirping sound, quite like the call of the Quetzal bird that is considered sacred in the area.

While touring Chichen Itza, you will come across two great cenotes – Cenote Sagrado (better known among locals as the Sacred Senote), and the Xtoloc (the second-largest one in the ancient city). The Sacred Cenote, originally called Chen Ku, is one of the most excavated water holes. Several excavations have uncovered a large number of artifacts in gold, silver, jade, and even human skeletons. This can be the reason why it is also known as the ‘Well of Sacrifice’. Historians believe the cenote was an opening to the underworld. The Mayans place objects as a sacrifice to appease the rain god, Chaac, in the mouth of this cenote.

Read our special Guide to Chichen Itza and know about its Location, Best time to visit and more.

Places to Visit in Mexico