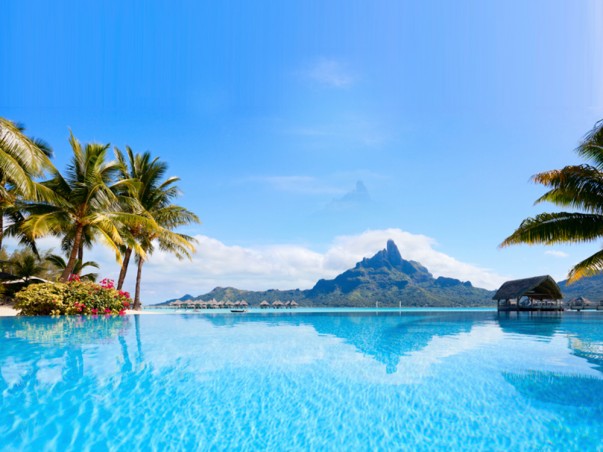 A Landscape from the Bora Bora Island

Bora Bora, amidst the Pacific Ocean is considered among the best vacation destinations in the world. This secluded island surrounded by blue waters, white sands, and corals in French Polynesia is lovingly called the ‘Romantic Island’. It is no wonder that loving couples and honeymooners, who are ready to splurge for their romance, prefer this island to others. It is in fact a famous destination among celebrities. This island is under the French administration.

Better known among the local Tahitians as ‘Pora Pora’, Bora Bora was actually mistakenly named by the first travelers who visited this island. Literally ‘Pora Pora’ means ‘first born’ in the native language (‘B’ is not even in their vocabulary!).

Spread across 15 square miles, Bora Bora features an undulating topography with extinct volcanic mountains, verdant fields, blue lagoons, and expansive coral reefs under the crystal clear sea. It is, therefore, renowned for its photogenic landscape. Its highest peak is Mount Otemanu at an elevation of 2,385 feet. There is another mountain in the island, named Mount Pahia, which is renowned among tourists for its hiking terrain.

The most sought after tourist activity in Bora Bora involves the water. Be it adventurous water sports, a relaxed boat-ride, or a lazy stroll across the white sandy beach, vacationers enjoy the blue expanse of the Pacific Ocean. Popular water sports here are snorkeling, deep sea diving, whale watching, and parasailing. Despite such a heavenly experience, Bora Bora receives far less tourists than Hawaii. The reason may be the cost incurred in a vacation here. In fact, this island is considered among the most expensive places to visit in the world.

If you wish to be left alone with your spouse or lover, the islets near Bora Bora are the best places to give you all the privacy you need. These include Motu Tapu, Tevairoa, Motu Toopua, Sofitel Motu, and Motu Ahuna. You can also find a man-made islet on the north-east side of the island, called Motu Marfo. It is owned by the St. Regis Resort.

The most memorable and precious take-away from Bora Bora can be the jewelry made with the special dark colored pearls found in the French Polynesian archipelago. The color of the pearls ranges from green to blue to gray and black. These are formed in a unique oyster, named the Black Lip Oyster. You can check them out at the jewelry stores in the markets and shops inside the hotels and resorts in the island.

Apart from the exhilarating experience of diving into the blue waters and looking at the vibrant coral reefs, you can also encounter a variety of small to big colorful fishes. These include parrot fish, manta rays, dolphins, clown fish and Napolean wrasses. The water around Bora Bora also has large sea creatures like the hump-backed whales, and even sharks. An interesting fact is that you will not find any kind of poisonous snake or even an insect that has a deadly sting in the island. Truly paradise, huh!

Bora Bora is one of the favorite places to shoot for Hollywood. The well known reality television show “Keeping Up With The Kardashians” showed the Kardashian and Jenner families having an exciting vacation in the island. They vacationed at the Hilton Bora Bora Nui Resort and Spa. A movie, named “Couples Retreat” was based in the island with all the major characters rediscovering their marital life while enjoying the picturesque place. A major part of the film was based in the St. Regis Resort. It was called “Eden Resort” in the movie.