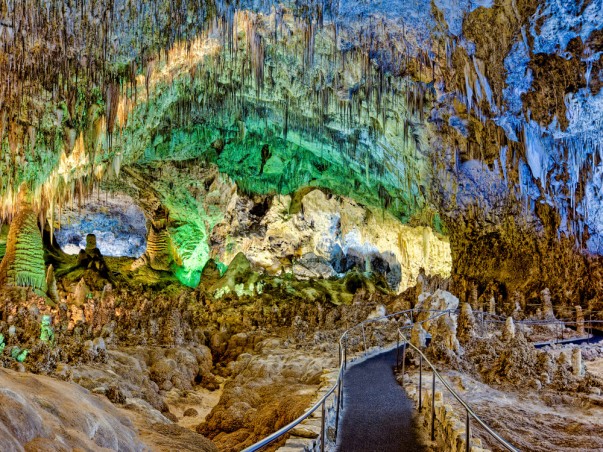 The Carlsbad Caverns, an underground limestone cave, draws visitors for its rock formations and extensive underground chambers. A prominent attraction in New Mexico, this National Monument (since 1923) is part of the Carlsbad Caverns National Park, which has about 118 explored caves (including the 134.86 miles long Lechuguilla Cave) and many unexplored ones. The national park has a rugged landscape of the Chihuahuan Desert, located in the Guadalupe Mountains in southeastern New Mexico. It is home to over 750 species of plants, 357 species of bats, 67 species of mammals, and 54 species of amphibians and reptiles.

Considered among the oldest cave systems in the world, the over 30 miles of length of Carlsbad Caverns features a variety of speleothems or cave formations. Its first massive room inside, known appropriately as the Big Room, is spread across 8.2 acres, which makes it the largest in North America. The Caverns' fame is evident with the 400,000 approximate visitations it receives in a year (according to National Park Service, 2012). The Carlsbad Caverns is about 27 miles from Carlsbad town in New Mexico in the southwest.

The story of the Carlsbad Caverns begins 250 to 280 million years ago when the area was an inland sea with limestone reef. Tectonic forces facilitated the rising of the reef above the sea level. The sulfuric acid in the groundwater gradually dissolved the limestone off the rising reef, thus creating underground chambers and caverns. Rainwater from above the surface trickled below the ground mixing with the carbon dioxide and forming carbonates. These carbonates deposited in the caverns forming stalactites and stalagmites of different kinds, like draperies, chandeliers, columns, and popcorns. Carlsbad is particularly famous for such formations. Evidence of such geological activities lies in the presence of ocean fossil flora and fauna in the Cavern.

The credit for the discovery and promotion of the Carlsbad Caverns is given to a 16-year old teenager, named Jim Larkin White. He found the cave in 1898 while looking for his stray cattle. According to his self-published booklets Jim White’s Own Story 34 years later, the first time he saw the cavern, its entrance looked ‘so absolutely black, it seemed a solid’. Today, with modern lights, elevators, and trails, the Cave has become more accessible and visible to tourists. During his visits to the Cavern, White recorded and named all the sections and formations he saw. These names are still used to describe the sections, like the Big Room, Queen’s Chamber, Green Lake Room, King’s Palace, New Mexico Room etc., and formations, like Rock of Ages, Queen’s Draperies, Bottomless Pit, Witch’s Finger, Iceberg Rock, Totem Pole, etc.

While exploring the Carlsbad Cavern, you will come across a section near the Big Room, named Bottomless Pit. If you think it is truly bottomless or reaches the centre of the earth, you will be wrong. Explorers have actually measured the pit to about 140 feet. An interesting fact is that the bottom of the pit has soft soil which makes no sound when it comes in contact with a stone thrown from above. This is the reason why early explorers while throwing stones to understand its depth thought it to be too deep, rather bottomless!

Bats are popular attractions in and around Carlsbad Caverns. The Bat Flight Program organized by the National Park Service allows you to enjoy watching the collective flights of bats in the evening. This spectacle is a natural phenomenon that Mexican (also called Brazilian) Freetail Bats undertake everyday from early spring to fall. In addition, you can also see the Bat Cave inside the cavern.

According to local history, Jim White had decided to check out the cavern after seeing the bats’ mass flight one evening. He also found a section in the cavern that was the preferred resting place for the bats. He named it Bat Cave. Later, in the early 20th century, American Indians used the bat cave to mine for guano to use as fertilizer in their fruit orchards.

Get location map & more information about the national park in US, visit Carlsbad Caverns National Park.

Related: National Parks In The US