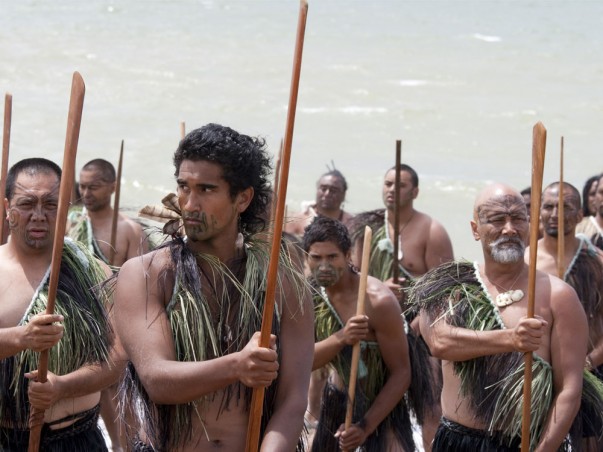 Maori warriors with taiahas at a Haka on Waitangi Day celebration.

The Maori people are the descendants of Polynesian people who first arrived in voyaging canoes (waka hourua) from their familial homeland of Hawaiki more than a thousand years ago. In present times, the Maori comprise fourteen percent of the population. Their culture and language has a significant impact on multiple facets of New Zealand's life. With time, the Maori established profound relationships with the land, exemplifying its natural features for creating a history where the land and the people are interwoven.

The rich and varied Maori culture holds much prominence in today’s world. Known for its contemporary and traditional art, this culture has earned immense appreciation over the years. Traditional arts like weaving, whaikorero (oratory), kapa haka (group performance), and moko (tattoo) are practiced throughout New Zealand. Practitioners follow the footsteps of their ancestors and implement the techniques that they used to produce marvelous art work. Additionally, they also develop their individual forms and techniques so as to come up with masterpieces. Now, Maori culture also includes film, art, poetry, television, theatre, and hip-hop music.

Maoris may trace their arrival back to the influx of the first waka from Hawaiki (the original home of the Maori). The term “waka” may imply “descendants from a canoe” or “canoe” based on the context. The settlers from the waka segregated into tribes (iwi). However, with a considerable increase in the population of this tribe, the iwis further got split into whanau and hapu. Genealogy has always held importance in Maori culture. In fact, the prestige and status to the Maori were largely based on their origins. Over and above, they called on their ancestors for providing guidance and spiritual strength. “Whakapapa” is the term used for describing Maori genealogy.

Maori culture is inclusive of complex concepts of noa and tapu. Tapu was believed to one amongst the strongest forces in Maori and had innumerable references and meanings. It may be interpreted as “sacred” and comprises of a powerful obligation of prohibitions and rules. A place, object or person that is tapu was not touched. For instance, in ancient times, tribal members of superior rank wouldn’t touch objects that belonged to lower rank members. In the like manner, lower rank individuals were not allowed to touch the belongings of higher rank people.

Tapu as well as noa are still a part of Maori culture, although people aren’t obliged to tapu constraints as they used to in previous times.

As the Maori people didn’t have any writen language, they preferred keeping a record of their past through stories. This mesmerizing art is performed as well as preserved at different sites around New Zealand. You can know more about this culture by participating in a “marae”. The word “marae” refers to a communal plaza that further comprises of a dining room (wharekai) and meeting house (wharenui). From the stories of the Maori culture we come to know that the world was created by the aggressive separation of Papatuanuku (the earth mother) and Ranginui (the Sky father) by their kids. There are different Maori artworks and carvings for depicting this struggle graphically.

No sooner do you step into the land of New Zealand that you’ll get acquainted with the Maori language. It’s because most of the place names are of Maori origin. It may be a bit difficult to pronounce the names initially, however, gradually you’ll get used to it. Maori culture has flourished because there are multiple ways in which Maori people have succeeded in uniting contemporary interpretation with traditional culture. Now, the Maori culture is expressed both in English, and the Maori language.

“Marae” is the most suitable venue for hosting a Maori gathering. In simple words, it is an enclosed land area where a meeting house stands. In general, the Maori language is spoken here though explanations and translations are provided if the principal participants don’t know Maori. With time, New Zealand universities and schools have their personal marae for facilitating the teaching of Maori culture and language. Some of the important Maori cultural events include-

It is true that Marae have advanced cooking facilities, yet they follow the conventional way of preparing hangi. The hangi comprises a superficial hole that is dug in the ground. Now, a fire bed is prepared in this hole and stones are placed above it. When the stones get heated, the food is placed on top of the stones; the meat is placed first followed by the vegetables. Now, mats or leaves are used for covering the hangi. Last of all, soil is heaped over hangi for keeping the heat intact.

Whale Rider by Niki Caro and Boy by Taika Waititi, Ngati, Utu, and Once were warriors are some of the renowned movies that reflect Maori culture. Patricia Grace’s short stories and Witi Ihimaera’s novels also gives us as glimpse of the insider’s view of the Maori culture. Maori people participate actively in the sporting culture of New Zealand. Tapawai and Ki-o-rahi are the two sports of the Maori origin.

Today you will find the Maori people are spread all through New Zealand and most of them are actively engaged in keeping their language and culture alive.

Maori wood carving is still alive because of the active participation from the conventional carvers. Their intricate works reflect the rich and varied culture of the Maori people. Every carved piece has a story that can be well understood by those who know how. Even today, the leaders of New Zealand respect and appreciate the ancient beliefs of Maori culture. Today about fourteen percent of the population are from the Maori people. Their rich and varied cultural heritage makes a significant contribution to the country. If you are planning a trip to New Zealand, then you are sure to explore both traditional as well as contemporary forms of Maori culture.