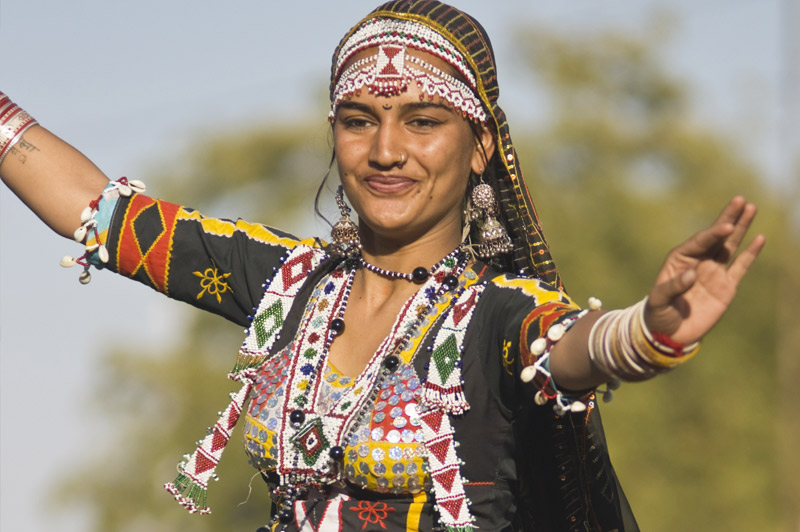 A traditional folk dance of Rajasthan

Steeped in tales of romance and princely eras of chivalry, the royal land of Rajasthan exemplifies the quintessential India. As winter unhurriedly fades out in February, the variety of customs, cultures, and landscapes reach the pinnacle of splendor in this mosaic of 22 kingdoms. From the amber dunes of Thar to the iridescent Chambal Valley, Rajasthan is a treasure trove of culturally diverse fairs and festivals.

Here’s a shout-out to famous festivals in Rajasthan worth attending. 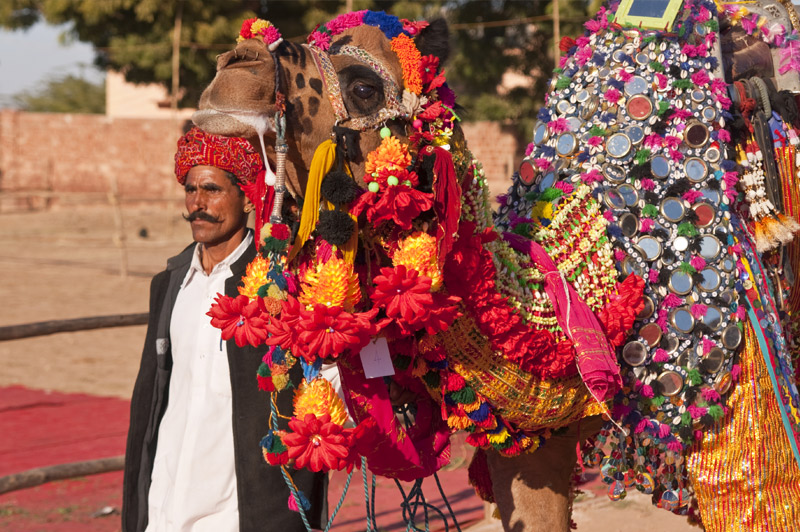 A camel ornamented with variegated colors

Imagine a flea market where vendors sell livestock instead of trinkets and souvenirs; because that's what it is. Also known as Ramdeoji Cattle Fair, this animal expo features agglomeration of animals like horses, cows, oxen, bullocks, and camels gathered from all over Rajasthan for a trade. It will be held from 13 to 16 February in Nagaur – lying midway between Jaipur and Jodhpur – which is not just a town but a carefully crafted tapestry of Rajput traditions and colors. This event is an ideal overture for the next festival on the list. 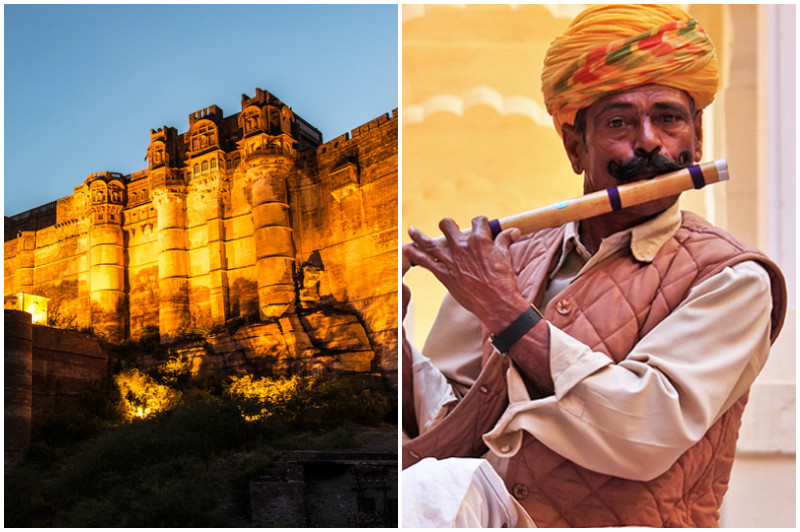 Sufism transcends religion; it is an inner quest for spirituality and truth. Expressed through mystical poetry, classical music and dance, the World Sacred Spirit Festival in Rajasthan musters up top-drawer artists from India, Africa, and central Asia in an incandescent setting. The 2016 edition of this festival will be held in two phases –

Find time in your schedule to go on desert safaris to spot a Black Buck and explore the mighty Mehrangarh Fort and its imposing walls that gird the 'Blue City' in Marwar. 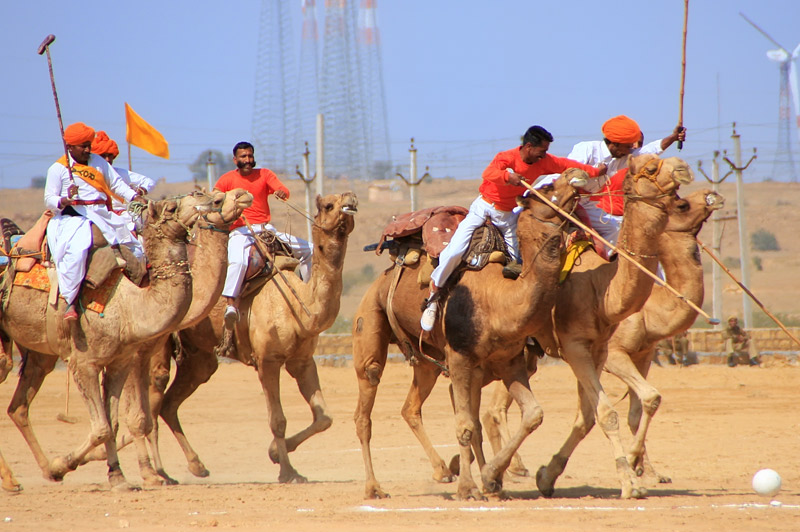 The Camel Polo is a popular sport in western Rajasthan

Shut your eyes and picture yourself riding a camel into the sunset away from the fetters of run-of-the-mill drudgery. Jaisalmer – where the unspoilt Thar Desert lies – hosts this festival of folk dance, acrobatics, and camel races. The 'Golden City' is resplendent with medieval havelis and photogenic sand dunes in the far west. Be a culture vulture and indulge in turban-tying moustache-flaunting contests, marvel at the bygone charm of ornate mansions, and camp under the moonlit skies. The dates for the Desert Festival are 20 to 22 February. 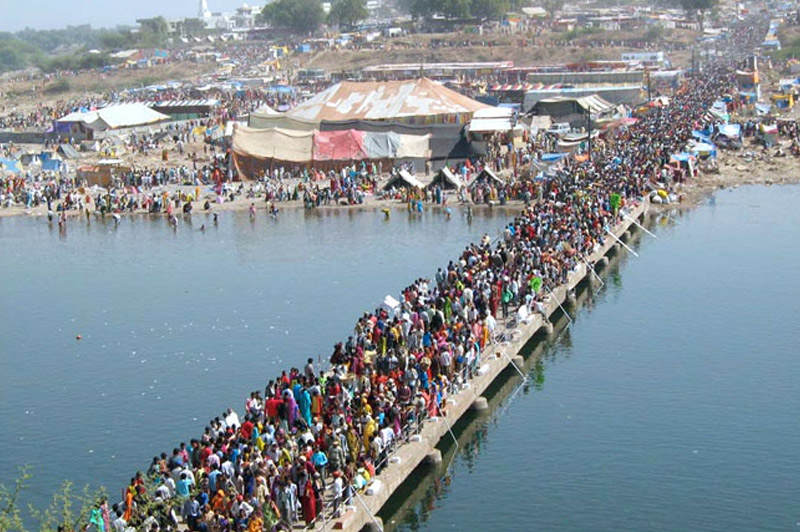 There is a nonchalant region that bears no cultural or linguistic semblance, but owes geographical allegiance to the hallmark of Rajasthan – or even to the outside world. Vagad region mainly comprises two districts – Banswara and Dungarpur. Near Baneshwar Temple, thousands of tribal people (Bhils) gather from Madhya Pradesh and Gujarat to take a dip in the confluence of Mahi, Som, and Jakham River and give their offerings to Lord Shiva.

Take a joy ride on merry-go-rounds or partake in the unique rituals and gaiety of songs with these wonderful people. The fair site is roughly 70 miles (112 km) from Udaipur and the fair is a five-day event held from 18 to 22 February. 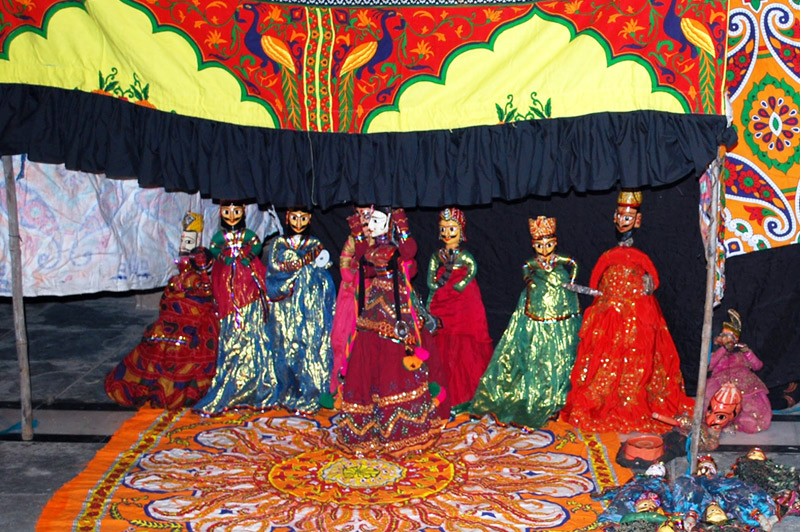 A puppet show in Rajasthan

If you always wanted to catch a puppet show in Rajasthan, look no further than Mewat region. Unearth the state's rustic beauty by attending the Alwar Festival on 13th February. The events include elephant polo, who-wore-it-the-best dress competitions, and flower shows. The festival also showcases Rajasthani culture, folk music, rich heritage, and handicrafts of the region. When the festivities are over, embark on jungle safaris in Sariska Tiger Reserve and experience the paranormal in Bhangarh Fort.

So, let the rustic spirit of a desert state smudge you as you hop on a camel to visit the most vibrant festivals and fairs of Rajasthan.