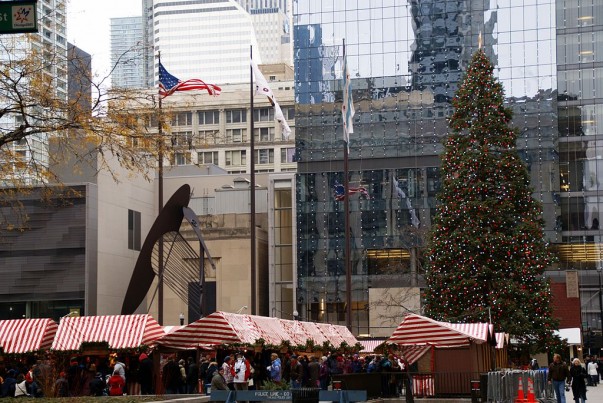 Daley Plaza during Christkindlmarket in Chicago.

Christmas in Chicago is a grand event to watch. The entire city gets decked up for this grand celebration held at the end of the year. Brisk activity is noticed among the citizens, adults and children alike.

Sending greetings forms an integral part of Christmas in Chicago. People make telephone calls, send Christmas cards, e-greetings as well as SMSs to greet their loved ones. Buying new dresses and wearing them is a major part of the Christmas celebrations in the city of Chicago. The houses, shops, as well as streets in the city are decorated with beautiful lights and balloons. You can view Christmas trees and people dressed as Santa Claus or even posters of Santa Claus almost everywhere in the city.Every year Chicago chooses its Christmas tree from a long list of nominations submitted by Chicago residents to the Department of Cultural Affairs and Special Events. This year the Department had received in excess of 80 nominations. A 57-foot Colorado Blue Spruce was finally selected the winner. The tree will be the 101st Christmas tree of Chicago city. It will be lit on November 25 on Daley Plaza. It is a very proud moment for the owner of the tree, Donna Atkinson, who has been nominating her family's tree to become the Christmas tree of Chicago city for the past three years.

On Christmas day, people visit the churches and offer prayers. Christmas carols are sung. Children wait eagerly for Santa Claus to deliver their Christmas gifts. On Christmas eve, the streets, restaurants and theaters buzz with people. Christmas is the time to dine out. People like to have their dinner with their friends and families. There are a lot of restaurants and bars and pubs which are overcrowded with people during the Christmas. Special dishes are served at these eateries during the festival.

Shopping for Christmas starts long before the auspicious day. The annual Christkindlmarket is the focal point of celebration with its decorations, amazing store of souvenirs, and a large variety of gifts. Besides, there are more than 40 timber cabins which are used for serving special Christmas food. The place attracts a lot of visitors. Other noted places of shopping are Marshall Field's department store on State Street and Magnificent Mile of North Michigan Avenue which abounds with gift items during Christmas.