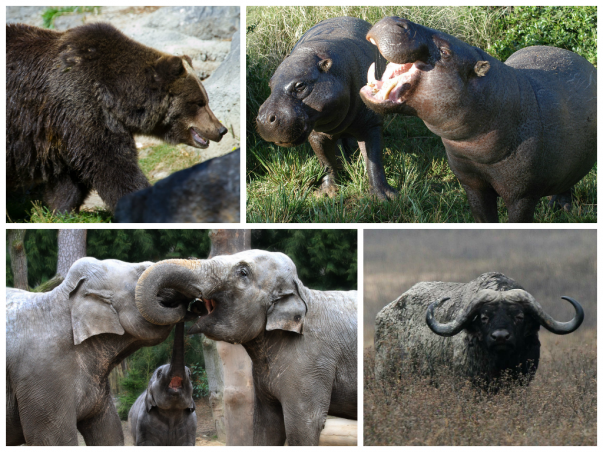 Escape into the wild, Experience the most Daring Safaris

Are you audaciously bold? Does the thrill of adventure leave your spirits satiated? If your adventurous spirits provoke you to indulge in something more exciting, then you can pick any of these destinations for Daring Safaris. Housing the deadliest animals in the world, these places offer extreme fun. The real game is to see these animals performing their daily activities without getting noticed by them.

Just after the insect the mosquito, the giant Hippopotamus is the deadliest animal on this earth as it has recently made a record of killing 2,900 people annually in Africa. You can see the African hippos at the Kruger National Park in South Africa. At a first look, they appear lazy because of their size, and the way they are usually found immersed in water, with eyes popping out to see what is going around. But these enormous beasts can be dangerous if they are angry. The reason for their anger is securing their territories and babies. So, a tour to see them from a nearby distance may cost your life. You need to be extremely careful, and not make them fret or act in a frenzy.

Elephant spotting at the Chobe National Park in Botswana, Africa

Elephants kill approximately 500 people annually all over the world. There are around 70,000 elephants in the Chobe National Park. The elephants at this park are short-tusked. They are found mostly around the Chobe River and Linyanti River. If you visit the park, you will see considerable damage caused by them in the park. Would you like to see them from a close distance? It is not just the elephants, you may also see several other animals including the sable antelope, hippopotamus, zebra, red lechwe, impala, etc. at the park. The crocodile is another dangerous animal that you will see at this park. According to a recent survey, the crocodile kills around 800 people in a year.

The Cape buffalo is one of the "Big Five" in Africa. Hitting a record of killing more than 200 people annually, this deadly animal is also notoriously known as “The Black Death” or “widowmaker”. The number of these dangerous buffaloes is increasing in the Ngorongoro Conservation Area, a UNESCO World Heritage site. Besides following the buffalo, you may also encounter lion, cheetah, hyena, mountain reedbuck, rhinoceros, or jackals at the conservation site. Remember to take a guide with you as you may be unaware of the inherent danger that surrounds you on your safari.

Encounter Grizzly Bear in the Jasper National Park of Canada

With a record of killing around 90 people every year, the Grizzly Bear living in the World Heritage Site, Canadian Rocky Mountain Parks is one of the deadliest animals in the world. The Jasper National Park of Canada has the highest concentration of Grizzly bears. Featuring a concave profile, these bears with long fur are omnivores, so you should be careful while roaming about to spot them. Here is a tip that you must remember - "the adult grizzly cannot climb the trees". There are quite a good number of animals in the park. and the territory of these bears often extends outside the park. You may camp in the park or plan to go on special dates in the park to attend several events that are held time to time in the park.

If you're a nature lover and thrill seeker you may like to visit these places. Before winding up, I would point out some more dangerous animals: white sharks, venomous snakes, and the Australian Box Jellyfish.