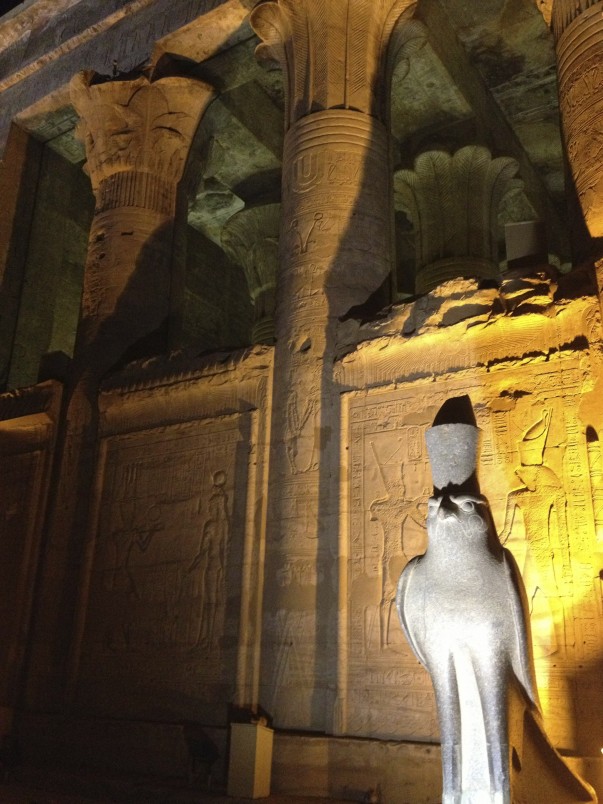 The famous Horus statue outside the Temple of Edfu

The small Egyptian town of Edfu has one of the best-preserved temples in the country: the Temple of Edfu, which is dedicated to the falcon headed god, Horus.

It was built in the Ptolemaic era and is a great example of the scale and detail of pharaonic architecture. The temple is located on the site of ancient Djeba (Edfu in Arabic) where the mythological battle between the gods Horus and Seth took place. The temple’s sandstone walls and towering pylon were unknown to the world until the 1860s, when Auguste Mariette discovered the main building.

It's believed that the construction of Edfu Temple spanned the reign of six pharaohs with the final touches added by Ptolemy XII Neos Dionysos. It's estimated that final work was completed until 140 BCE.

In pharaonic times, Egyptologists suggest the temple hosted several festivals sacred to Horus. One such festival marked the marital union between Horus and Hathor of Denderah. The backstory to its history adds an extra dimension to the visit and one can imagine the grounds surrounding the temple thronged by the pious and spiritual.

Today, due to increased security in the region, Edfu Temple is mainly reached via Nile Cruise ships, which has left it off the 'main stream' tourist market. This means that compared to other sites nearby it's much less crowded and you're able to wander the grounds for much longer and really soak in the atmosphere and intently study the ancient hieroglyphics detailing the history. As with other places like this, it always helps to get a guide because they can explain the stories told through the engravings and symbols.