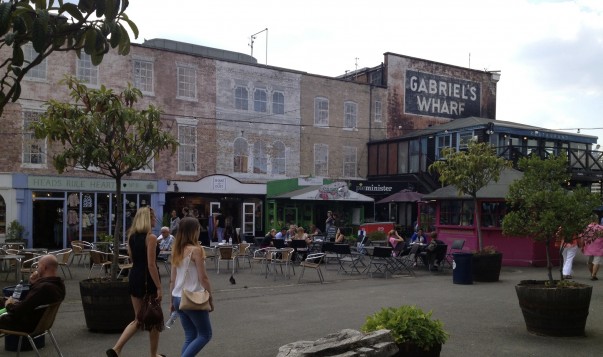 Gabriel's Wharf is located towards the end of London's South Bank and a great place to explore.

Gabriel's Wharf is a popular riverside marketplace located between Oxo Tower Wharf and London Television Centre. I discovered it when on a walk down South Bank, a top destination in the capital that includes the IMAX Cinema, the National Theatre, the London Aquarium and of course the London Eye.

If you start from the Embankment side of South Bank, Gabriel's Wharf is in the opposite direction, so towards St Paul's Cathedral for those who want to get their bearings right. The blank wall of the London Studios provides the backdrop. It was painted in 1988 following the opening of Gabriel's Wharf.

There's a nice mix of boutiques here, some of which sell custom-made jewellery and home ware. They all fetch at a pretty hefty price tag, seeing as they're one-off pieces. In fact, all the shops are exclusively run by small business owners who design and make all the products. You might just find that the person selling you whatever trinket you've chosen would have made it as well. If shopping's not your cup of tea, there are a few cafes and restaurants to grab a bite to eat. If the weather permits, it's great to sit outside and enjoy the atmosphere along the River Thames.

For those seeking some more excitement, head to the London Bicycle Tour Company's shop. They're London's biggest private-hire bike company and offer bicycle tours around the city. The Central London Bike Tour is the most popular and takes you around Big Ben, the Houses of Parliament, Trafalgar Square and Buckingham Palace.