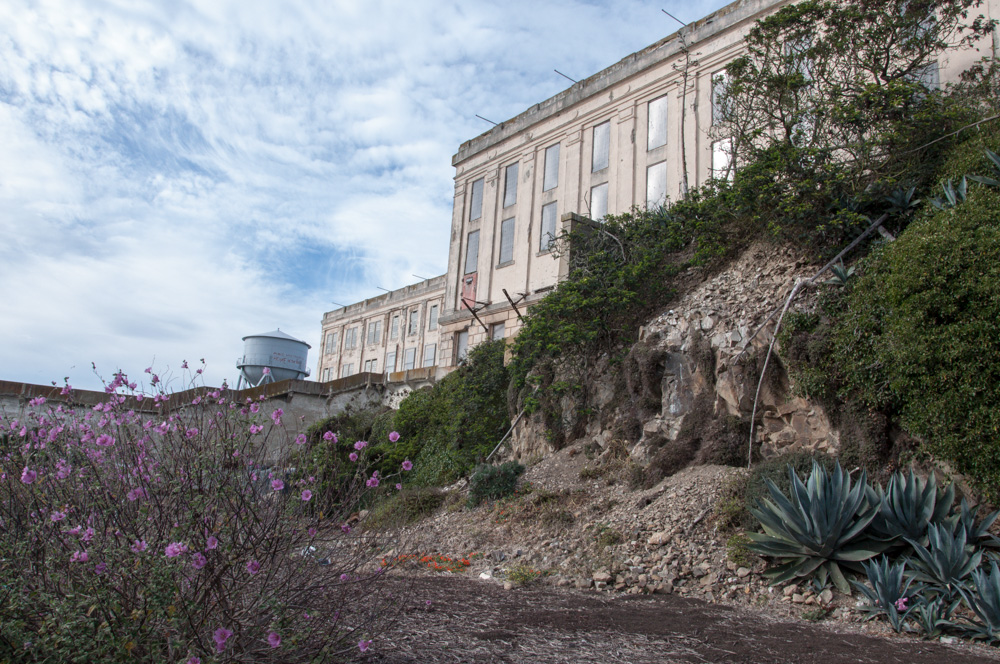 The audio tour, a narrated self-guided walk through the cellhouse, is now included in the ferry ticket cost, which is a positive change from the last time I visited Alcatraz about 15 years ago, when a separate fee was charged. I saw a few people walking around the cellhouse without headphones, but the guide is essential to the experience of visiting Alcatraz. The audio guide is available in 8 languages and lasts about 45 minutes. The tour loops visitors through the prison while explaining the day-to-day operations at the prison and narrating a few of the most exciting legends of its history. The audio guide features narrations by former inmates and guards, as well as sound effects, to bring the building’s intense history to life. It’s certainly effective, allowing visitors to picture the events as they happened, and as a result, the energy in the cellhouse is tense and dreary despite the crowds shuffling around.

A gun gallery on either end of the cells was a second-story locked walkway where armed guards watched over the cells and kept the guns and keys away from the inmates. 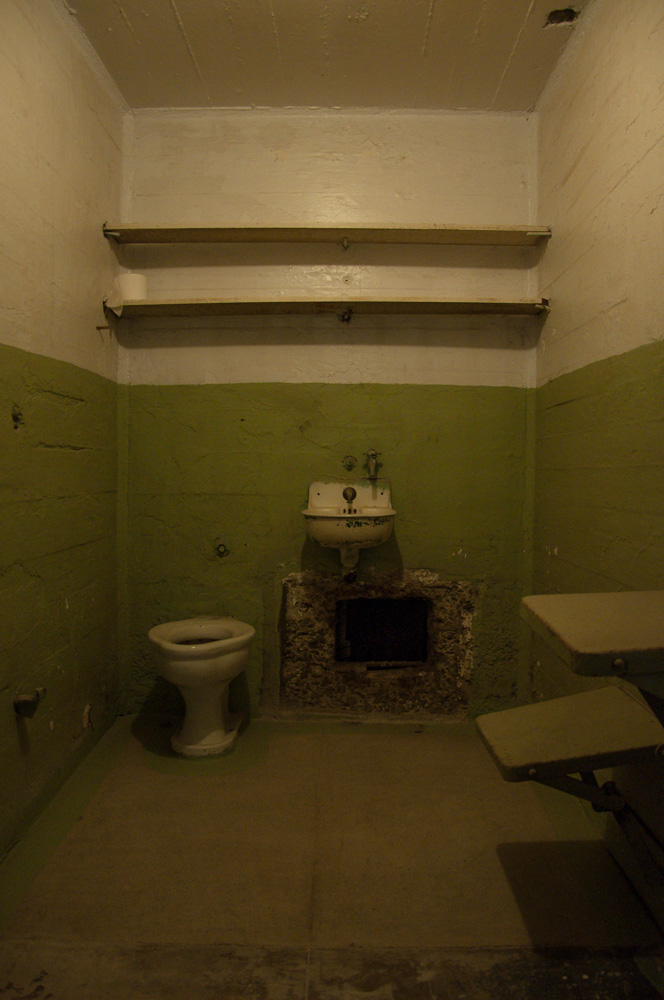 The cells measure 9 feet long by 5 feet wide by 7 feet high and contain a bed, a sink, a toilet, and a shelf. Some are staged with artwork, books, and other personal effects. Inmates at Alcatraz had no cellmates, which seems like a luxury. The cellhouse is dimly lit by fluorescent overhead lights and grey light from the high windows. The cells are stacked three stories high, and though we are not allowed to climb up the stairs, it’s clear that those windows would have given great views of the beautiful city, a poignant reminder of their lost liberty.

The cells are arranged into blocks called A, B, C, and D. The main walkway between them was nicknamed Broadway, and the hall in front of the dining room was called Times Square. Cell block A was used primarily for storage and at some point a law library, while B housed mostly incoming inmates. D block was used for solitary confinement and also for segregation. At the end of the D block are the cells known as “the hole,” where inmates were punished by being left in dark cells with nothing but a toilet (sometimes just a hole in the floor), and meals of bread and water passed through a slot in the door. The audio guide directed me to enter one of these cells at the end. I stood inside the darkened cell looking out at the thin beam of light on the other side and shivered, imagining the horrors seen and felt in that very room. 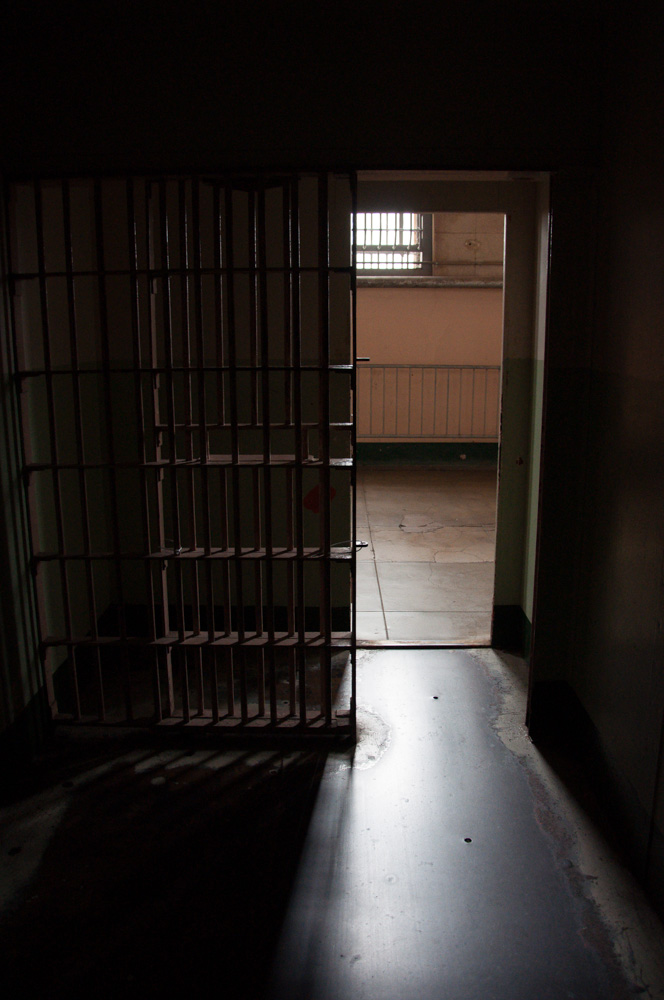 The audio guide details a few of the escape plots, which are the most dramatic part of Alcatraz. There were 14 total escape attempts, though most were thwarted by guards and the inmates returned to their cells. Two incidents are noteworthy: The Battle of Alcatraz and the Escape From Alcatraz.

The Battle of Alcatraz happened in 1946 when Bernard Coy, with the help of a few other accomplices overpowered a guard and took him hostage, then used a device to spread the bars apart in the gun gallery, slid through and attacked another guard as he returned to the gallery. Coy gained control of the keys, guns, and some other weapons and used them to force other guards to release inmates, using other guards as hostages and shields. The inmates locked 9 guards away into cells, but were unable to gain access to the outside. Out of options, they held control of the cellhouse and in their frustration, they began shooting at the guards. The stand-off lasted hours through the night, and marines were brought in to assist the guards. With limited angles, the marines dropped grenades and fired into the cellhouse from the roof. Two guards and three inmates – Coy and two of his accomplices – were killed in the battle. Two other inmates involved were tried in court for their participation and sentenced to death.

The Escape From Alcatraz incident is better known (thanks to the movie by the same name), and is the only escape in which inmates might have been successful. Careful planning, a good scheme, and a lot of luck came together when four inmates conspired to fashion a raft out of raincoats and tunnel through their cell walls with spoons. The audio tour directed us to cells with holes carved out of the back walls. Another cell held the creepy, realistic sculpture of a head that had been used as a decoy in the escape. Only three of the conspirators made it out of their cells and up to the rooftop (which was unmanned because of budget cuts as the prison neared its final shutdown) and made it out to the water. The officials associated with Alcatraz today all seem to believe the escapees drowned in the freezing waters and their strong currents, but the other inmates held out hope of their success, some believing they’d made it all the way down to South America.

Parts of the raft washed up on Angel Island, so that may not be likely, but urban legends suggest the men may have made it, like rumors that their mothers receiving flowers each mother’s day after the escape. I want to believe.

Midway through the audio tour, the Sounds of the Slammer demonstration began. A park ranger showed us the complicated lever system that allowed the guards to open and close the cell doors. The mechanism located at the end of the cell block made it possible to shut all of the cell doors at once, resulting in a distinctive and loud slamming sound that soon became synonymous with the prison itself with the nickname “the slammer.”

Near the end of the audio tour, we were sent to the mess hall where inmates and guards would eat together some of the best prison food there was – and the menus didn’t sound half bad. It was in the cafeteria that the audio guide explained how the prison came to a close, describing the relocation of the remaining inmates to other prisons that last day in 1963. On the wall hangs a black and white photo of the inmates’ last walk on Alcatraz, heads bowed and peacoats draped over their shoulders and it’s striking how refined and normal they look by today’s standards. It’s hard to imagine them as tough criminals.

Speaking of which, after we returned our audio guides, we were directed to exit through the gift shop, where we were fortunate to find former Alcatraz inmate Bill Baker. Now 80 years old and a free man, Bill looks nothing like his mug shot printed on the book he was there to promote, Alcatraz #1259.

After meeting him, we had some time to kill before the next boat, so we decided to check out the rest of the grounds on the north side of the island and the recreation yard. We found great views of the Golden Gate Bridge and a pod of pelicans, the island’s namesake. With gardens and fruit trees, the area was peaceful and scenic, juxtaposing the bleak cell house. We made our way back into the cell house through the yard, a small, partially paved except for a dirt-covered baseball diamond lot next to the dining hall. The yard is surrounded by high concrete walls and guarded by the gun gallery and a watchtower. In the limited time they spent here, inmates must have felt their most free, with open skies above them. They played sports like basketball and baseball, played chess, or walked laps, sometimes scheming their escapes. 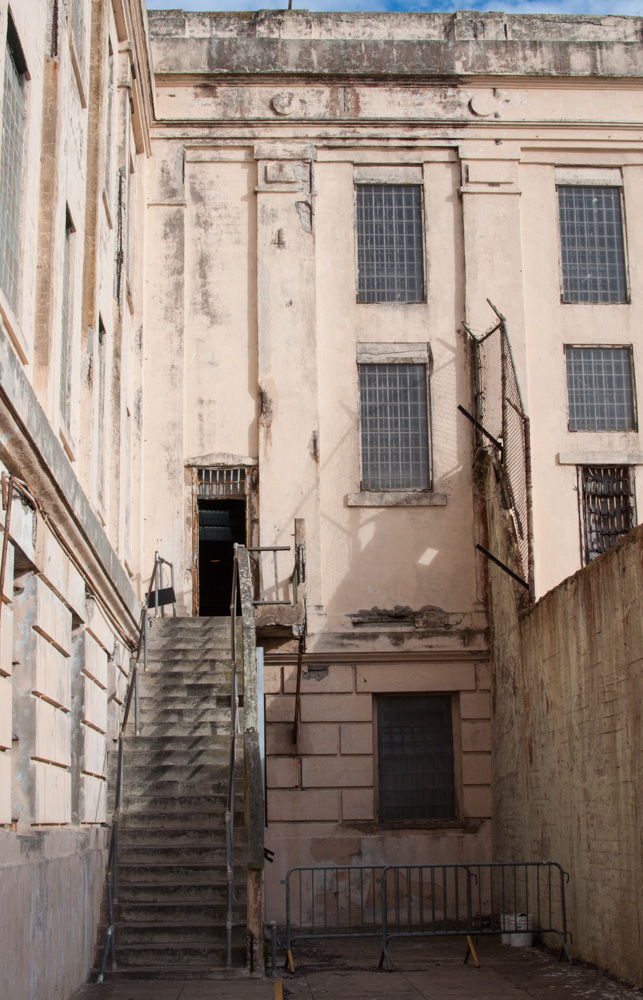 Stairs from the recreation yard back into the cellhouse

Climbing the stairs from the yard back into the building, a glimpse of the open water is visible over the fence. I imagined how it would have felt, after a few hours of enjoying the tiniest bit of freedom, returning to the confinement of the 9 by 5 by 7 foot cage. 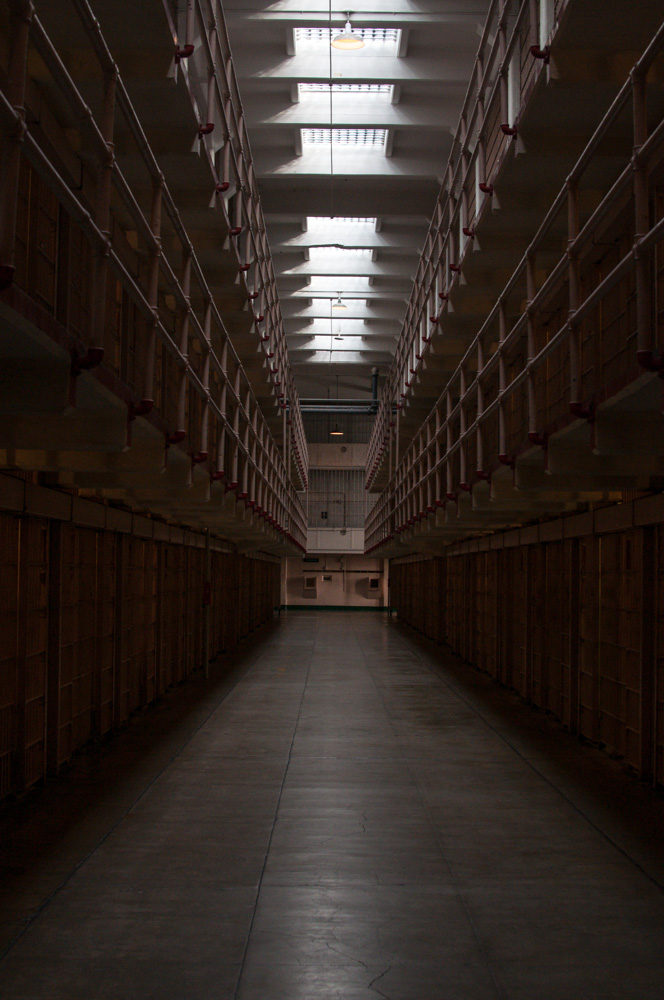 I felt a moment of real panic as we stepped back inside and realized we were alone in the cell house. I had lost track of time and briefly feared we had missed the last boat and would be stuck on the island overnight (which, upon reflection, would have been exciting for at least few minutes before it either got very boring or very scary). We hurried back down to the gift shop and I let out the breath in relief at the sight of other people. We made our way down the hill back to the ferry and back to San Francisco, fortunate to be free to leave.