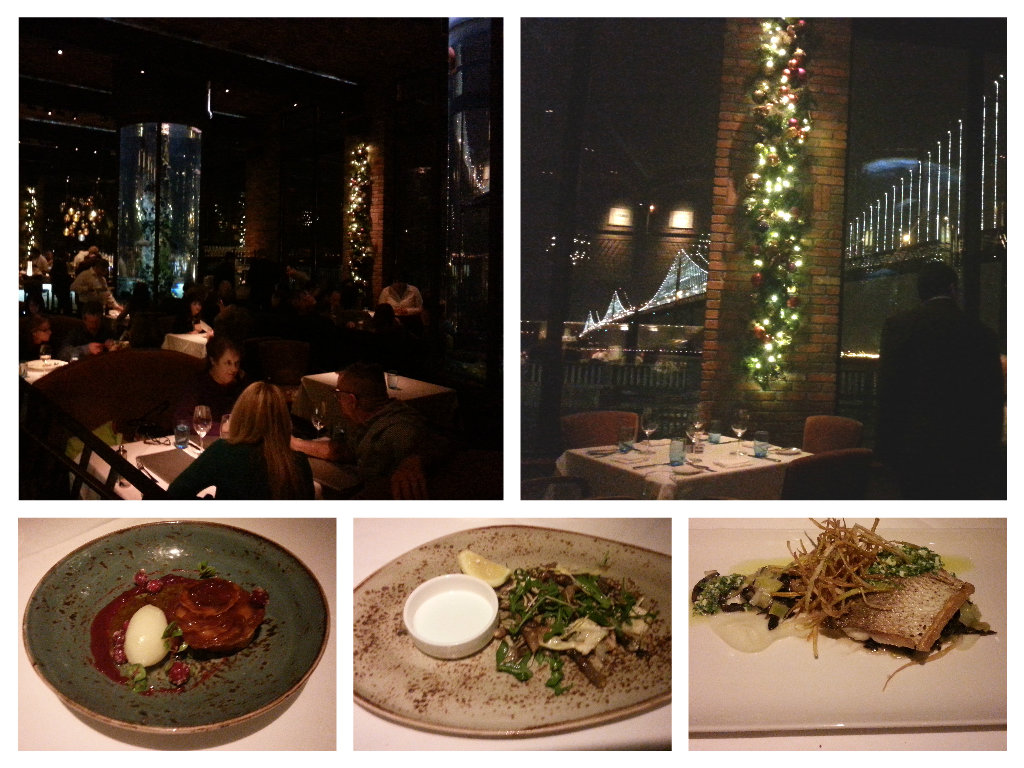 Waterbar Restaurant Review– Waterbar is a big, expensive, flashy barn of a restaurant. It’s kind of the Anna Nicole Smith of places – showy, big, and conspicuous. This begins with the setting, which is, as the name implies, right by the edge of San Francisco Bay, with the Bay Bridge and its lightshow as the backdrop, which is more than a little spectacular. I mean, the thing is hundreds of feet high, a mile or so long, and lit by millions of dollars’ worth of lights which strobe around in a computer-generated pattern. That’s showy.

It’s an expense-account kind of place, not unlike Prospect, which is only a few blocks away. The service is almost flawless, and they get all the details right. The food is very competent, with a couple of interesting surprises. I wouldn’t describe it as relaxed. I would describe it as noisy, kind of dramatic, and exciting. If you like exciting.

The engine behind this place is Pat Kuleto, a Bay Area restauranteur who has, according to his website, over 150 restaurants, including Boulevard, and a slew of other places around here. This explains the professional feel of Waterbar restaurant as well. When I said they got all the details right, I meant it. For instance, the bread is warm, comes in two varieties, and the butter for it is both salted (which is nice) and soft enough to easily spread and melt, which is also nice. They’re also clearly unafraid to spend money on the décor and the ambience, because clearly they also have it.

As its name and location suggests, this place heavily emphasizes seafood. The menu changes daily, and there’s a description of where everything on it was acquired/harvested/caught and so on. There’s also a lot of stuff on it about sustainability, if you care about that sort of thing.

Waterbar restaurant is on the Embarcadro, and there is no parking there – zero – or at least it’s very expensive and difficult to find. Use a parking garage, or take BART to the Embarcadero station and walk for ten minutes.

As previously indicated, big, flashy and showy. There are immense floor-to-ceiling windows with a spectacular view of the spectacular Bay Bridge. Not one but two immense, circular, floor-to-ceiling aquariums. Thirty-foot barrel-vaulted ceilings, patterned carpet, white tablecloths and lots of dramatic, high-contrast lighting. This place looks like a movie set in a film where the star has to negotiate with the local Mafia boss. Glamorous.

Service at Waterbar Restaurant – Great and super-professional. I have done this enough so I notice things like servers crumbing the table not once, but two or three times. Silverware shows up and/or is replaced quickly and expertly. The handoffs between runners, servers, and the occasional look-in from a supervisor is flawless. Plus, my server, at least, was friendly, relaxed and chatty when that became appropriate. These people have been carefully, professionally trained, and it shows. For instance, this is a seafood place with its own shellfish menu, and she presented it, opened it, quickly ran me through it, and then equally quickly retrieved it when I told her I wasn’t interested, thanks.

Not bad, for this market and this kind of place. $95 for appetizer, dinner, dessert, coffee and two beers.

Excellent, and prepared with a very high degree of professionalism. The kitchen is enormous – I counted at least a dozen chefs – and they definitely really know their way around seafood.

I began with, of all things, barnacles. This was really a lark – I just wanted to see what happened. They’re listed on the menu as percebes, and are technically gooseneck barnacles harvested off rocks in the Pacific in, apparently, British Columbia. They’re poaches in seawater, and served with shaved artichokes, garlic butter, and Calabrian chile, along with lemon and dipping sauce.

Short of some of the very expensive things I was served at Sons & Daughters, this was the most ridiculous thing I’ve ever eaten in the Bay Area. I was, of course, asking for it, so it’s nobody’s fault but mine. In case you’re ever tempted to tray barnacles, be aware that hese little things are a) difficult to get at and eat; b) slippery and messy enough to require a cleanup napkin all their own; and c) so tiny it’s basically impossible to acquire any idea what they actually taste like. Interesting, and I learned something, but for nineteen dollars, you could have something a lot more recognizable and good.

The entrée was whitefish, which is a Midwestern freshwater fish (this one came out of Lake Superior, I was told). I have had several dishes like this one in San Francisco – it’s a kind of high-quality corporate cooking – a single piece of a very expensive fish, perfectly cooked and delivered on a bed of a variety of mostly lower-cost background ingredients.

The fish was sport of like a much milder version of tuna, with a lovely, slightly sweet flavor It arrived on a plate that included a cauliflower puree, trumpet mushrooms, and a sauce ravigote – a French sauce, slightly acidic, based on finely chopped herbs and designed to complement something mild like fish. All of this worked. What kind of didn’t were the shaved, deep-fried leeks. Although they made a wonderful garnish they were also tremendously salty and oily, which kind of overpowered the subtleties of the dish, to put it bluntly, amazing. Still, though, a really good entre.

Dessert at Waterbar restaurant was really interesting – the menu read: delicata squash tarte tatin — apple cider sorbet, cranberry sauce. Unpacking that, a delicata squash is a sweet winter squash that’s kind of a workhorse for a lot of different recipes. A tarte tatin is basically a French version of an upside-down cake. To make squash into a dessert, the trick is to heavily sugar it, then carmelize the sugar, along with hosing it down in a similarly reduced cranberry sauce. The result was really interesting – the sorbet was dry and tart, which worked along with the cranberries. The tarte was sweet, but had a carmelized undertaste which was really good also. This turned out to be a fascinating, multilayered desert, with a lot going on, a lot of different tastes and textures, and a complexity that’s kind of unusual but worked beautifully.

All in all Waterbar restaurant is a reliable, large-scale and relatively showy backdrop for a really good, nicely-constructed seafood meal. If you need to impress someone or talk business, this is the place. 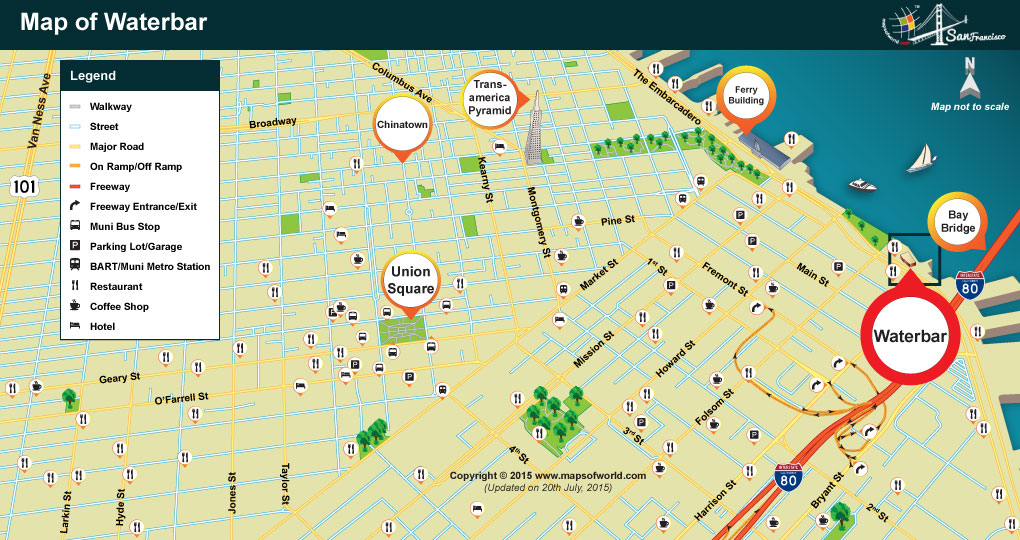