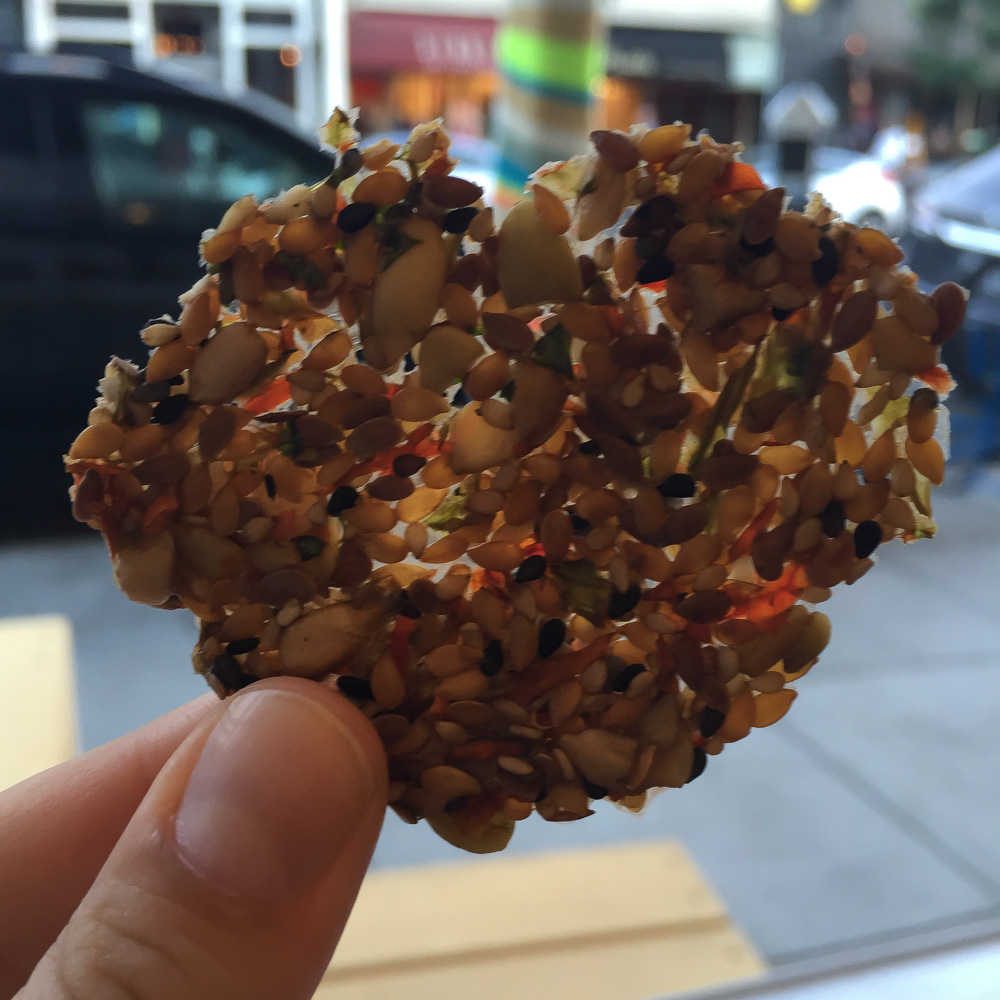 Seed + Salt and a yarn-bombed tree

Seed + Salt is the kind of restaurant you’d expect to find in San Francisco: organic, plant-based, GMO-free, dairy-free and gluten-free food. It’s perfect for vegans and people who love to eat clean, but will also satisfy everyone else with its quality, flavorful foods.

Open for breakfast, lunch and dinner, Seed + Salt Restaurant is still fairly new, having opened in late 2014, so things like hours and menu seem to still be in flux. Serving up Californian food, Seed + Salt feeds into the crunchy granola stereotype of the city. The daily specials and seasonal salads are based on what foods are in season, which you can check on their website before you go.

One of their most popular menu items is the Gamechanger, a greenjuice made up of romaine lettuce, dinosaur kale, cucumbers, parsley, apple, lemon, ginger, and mint. It sounds good but I can’t see myself paying $11 for veggie juice, no matter how delicious and healthy it may be. Still, I’m happy that this is the latest food trend, and that they even have a kids menu. Whether you’re eating gluten-free for medical reasons, plant-based for health reasons, vegan for ethical reasons, or even just an omnivore searching for something new, you can eat delicious food when you go out at Seed + Salt Restaurant.

You might not think it’s for you if you roll your eyes when someone mentions kale or gag at the thought of a plant-based diet, but put those prejudices aside and try something here – you might be surprised at how delicious healthy food can be (and how good you’ll feel after eating it).

This is the new, modern, fast-casual style. Walk up an order at the register and take your order to go or sit at one of the industrial metal stools and wooden tables. There’s a glass display counter that showcases the day’s specials.

The restaurant is bright and open with white walls and large front windows that were wide open on that warm afternoon. We sat at a counter in front of the windows and it was almost like we were sitting outside. There were tables outside if we had wanted to sit out there instead. Inside, there were succulents and plants in boxes hanging on the wall feature.

The food is served in disposable (but all compostable or recyclable) containers, partly to conserve water. Seed + Salt Restaurant has a clear brand, from their logo to their menu and every corner of the restaurant.

The service at Seed + Salt was friendly and not pretentious at all. The cashier was a good salesman, suggesting some extras that I happily agreed to. The best part was that he didn’t expect me to know what everything was – and I didn’t feel judged as he explained it to me. There were clearly already a few regulars who stopped by, which makes me pretty sure the good service was no fluke. Despite what your preconceived notions might tell you, there was nothing pretentious at Seed + Salt.

It’s a little on the pricy side for a meal, but not really when you consider the quality of the ingredients. Soups and salads cost about $7, while sandwiches are between $12 and $14.

The baked goods were too expensive to make me want to try them this time ($5 for a cookie), but I could see handing over the cash if you need a gluten-free diet (and based on how good the gluten free bread was, it would probably be worth it). I would consider trying one on my next visit, now that I know this place is good. 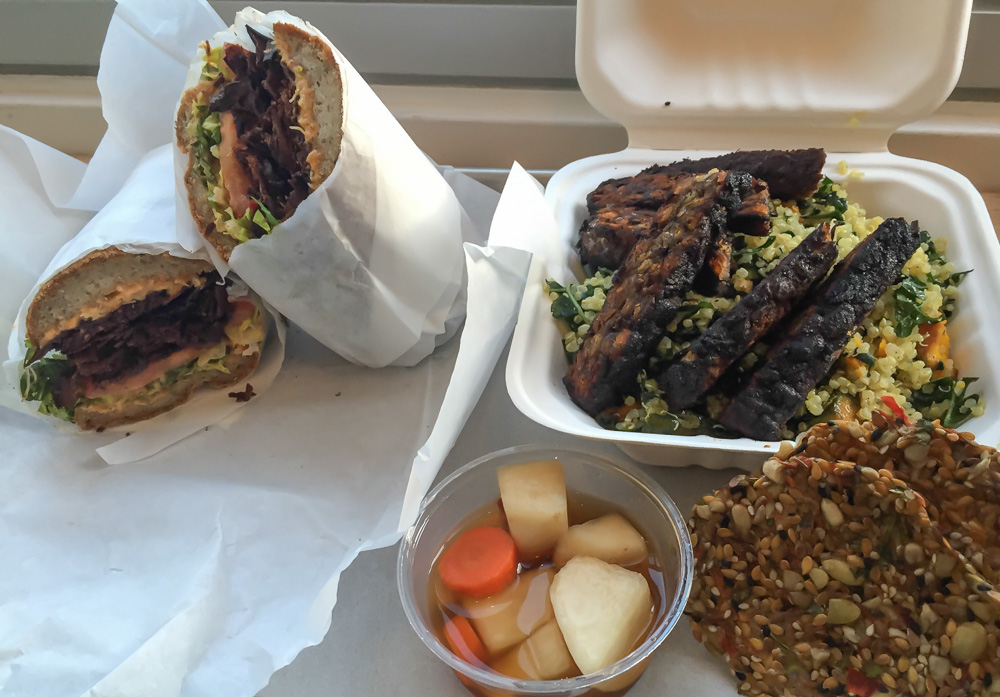 The breakfast menu at Seed + Salt Restaurant features assorted baked goods, a berry parfait bowl, and a few intriguing items like chia pudding, a faux-frittata made with chickpeas, and now a breakfast sandwich.

I’d heard about the eggplant BLT and decided to stop by for an early dinner. I checked out the seasonal salads on display in the glass case, and picked out the kabocha squash and kale quinoa. The cashier asked if I wanted to add black bean tempeh, and quickly explained that it was a fermented black bean patty. Somehow, that sold me on it, even though it sounds terrible (but it was a good call, because it tastes delicious). The quinoa was cold (intentionally), and the tempeh was hot. The tempeh presentation resembled sliced steak, and though the flavor was different, it was hearty like meat. I would definitely order it again. The kabocha quinoa salad was good but nothing I couldn’t easily make at home.

On the other hand, the eggplant “bacon” on my BLT was amazing – and this is coming from someone who enjoys actual bacon from time to time. No, it wasn’t an exact replica of bacon, but it is a fantastic substitute for vegans who might miss the salty smoked flavor of bacon. The bacon portion was hefty, and it was all perfectly crispy, just how I like my bacon. I wish I knew how to transform eggplant into something so crispy and flavorful.

The bread was fantastic, and apparently gluten free, though I wouldn’t have known it from the taste. And they sell loaves! The pimenton mayo was great and creamy, and again, I wish I knew how to make it because I think it would be delicious on a lot of things. The BLT tasted fresh, the flavors were balanced, and I didn’t miss real bacon one bit.

I don’t know if their water was ionized or whatever they claimed over at the now defunct Source across the city, but it was particularly delicious and refreshing (or I may have been dehydrated).

I still want to try the S+S beet burger, even though it looks like a purplish, bloody hamburger. There’s a kale-wrapped quinoa falafel on the menu that’s on my list as well. One of these days, if I’m ever feeling crunchy and rich (Goop), I’ll come try the Gamechanger and see if it lives up to its name. But on this particular day, after this tasty dinner, I walked down to the burger joint on the corner and ordered a milkshake (and it was amazing and I deserved it after such a healthy dinner).

I’m happy to have found my new favorite vegan restaurant in San Francisco. I can’t wait to try the summer specials. 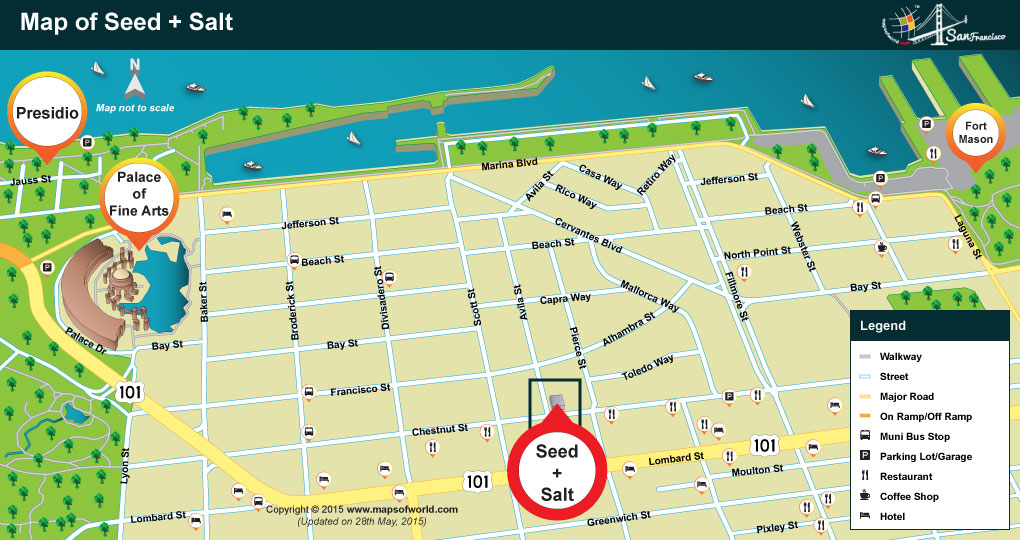