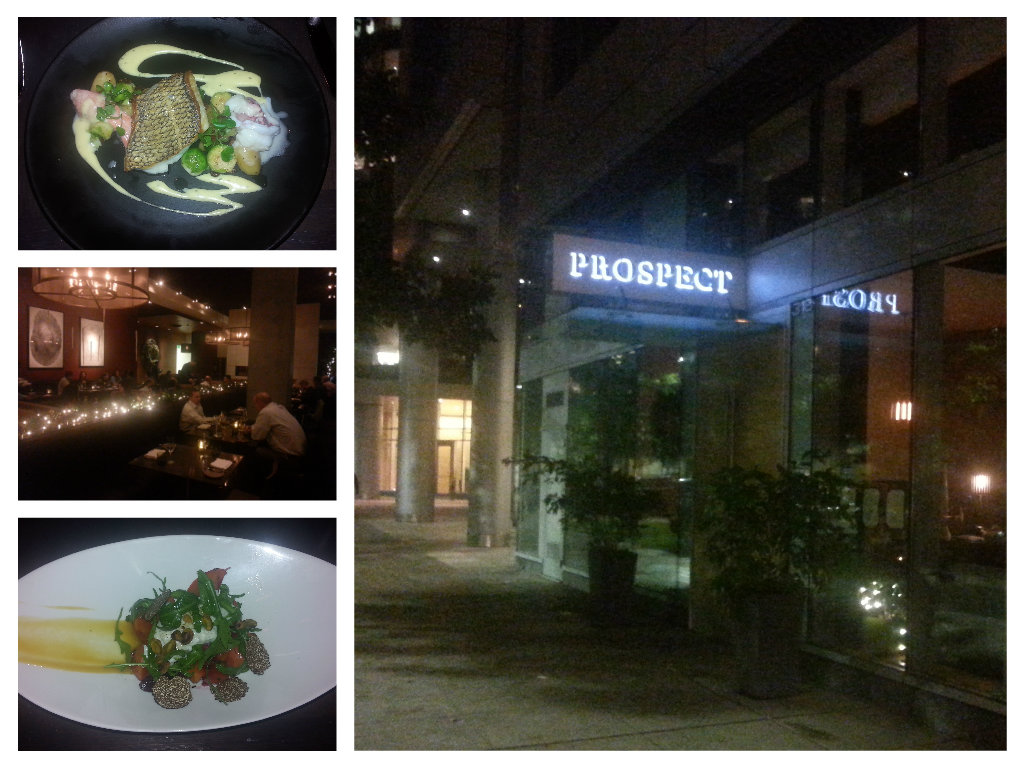 A nice, big, high-energy place in the Financial District that delivers surprisingly creative food, Prospect Restaurant is a great place to go for a business dinner, or to discuss a deal. It’s not too romantic, so this isn’t a place on a date, unless your date is Larry Ellison, in which case you have bigger issues to worry about anyway.

That being said, I would also say that Prospect does some very slight overreaching on its food. My impression was that they were fighting just slightly above their weight class. However, the service was flawless and friendly, and overall, Prospect was a lot of fun, and a damn good dinner.

Downtown San Francisco, in a very heavily-trafficked part of the city. Parking is going to be a real challenge, so either find a nearby garage or take BART to the Embarcadero station, and walk for 5-10 minutes to get there. 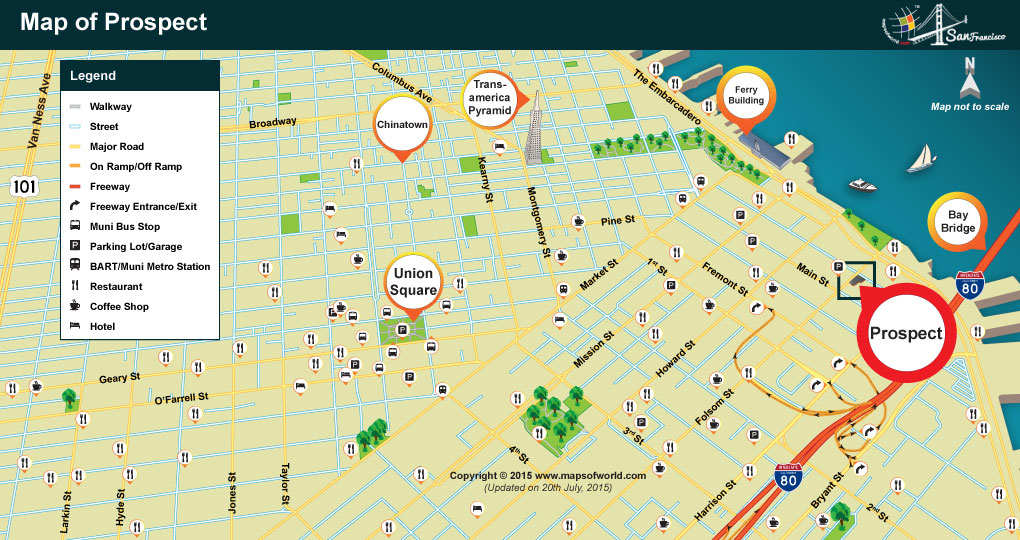 Big, contemporary, interesting. The Prospect restaurant occupies most of the ground floor of a skyscraper in downtown San Francisco, so there’s lots of room and the tables aren’t jammed together, which is something I despise. You can sit either in chairs or banquettes, plus a big bar at the front of the house, should you be so inspired. Décor is sort of postmodern restaurant – lots of faux Sixties touches, earth tones, hand-created wrought-iron chandeliers, and so on. There are lots of business people in Prospect doing, of course, deal. They’re fun to listen in on.

Great. Very professional, expert and fast. Everyone knew their jobs, and did the flawlessly.

Expensive. A very simple dinner – a beer, a salad and an entrée came to $68, with no dessert. Dinner for two here would easily be $150.

The appetizer was a beet salad, which can turn out to be anything and is always a bit of an adventure to order. In this case, it was a composed salad of whole beets, and is described on the menu as Taylor gold pear jam, toasted pistachio, burrata, arugula and beet vinaigrette

The result was terrific. Small, incredibly sweet beets, with several ingredients as a counterpoint. It was delicious, and interestingly, it was also fascinating to look at. Most resturants put together salads using the same visual tricks over and over and over – sort of the salad-as-sculpture approach. Prospect’s salad actually used the sauce as a kind of paint, and created a really nice, abstract image on the plate that was beautiful and genuinely original.

For an entrée, I went for the black bass and Maine lobster, described on the menu as Rose Finn potatoes, smoked bacon, Brussels sprouts, and lobster Béarnaise. This was good, but in the end, it didn’t quite work.

Let’s back up. I grew up in upstate New York. Every week a truck would arrive at the local market, having made the run from Owls’ Head, Maine, with, at the very least, a load of fresh (meaning live) lobsters which, eighteen hours previously, had been swimming around in the Atlantic. Short of standing on the dock, waiting for the boat, these are about as fresh as lobster gets, and we ate a huge amount of it. I know a lot about lobster.

Fresh lobster, properly cooked, is incredibly rich, nutty and sweet. It’s not a subtle flavor, like scallops or, for that matter, black bass. It is strong, and amazing. What appeared on my plate looked great, and was beautifully put together, but lacked some of that flavor. It was just a little pallid, just a little watery, which makes me suspect it was frozen, which is not cool in a $38 dish.

Also, the Bernaise sauce sort of overpowered this dish, particularly when paired with bacon. What you got was a very salty, very rich sauce, being used with lobster and very delicate black bass. It did not, in my view, complement the two main ingredients, but instead, sort of buried them. Again, nothing was actually bad – it was very good – but for something like this, I would have gone with better/fresher lobster, and a lighter sauce. The sauce worked well with the Brussels sprouts and the potatoes, but didn’t play nicely with the main ingredients.

Prospect Restaurant is run, interestingly, by an all-woman team of chefs, and is Boulevard’s more contemporary cousin – same company, lots of back-and-forth between the staffs. They source their stuff from farms all over the Bay Area, and into California. This is an excellent restaurant, perfect for a business dinner or an evening out.