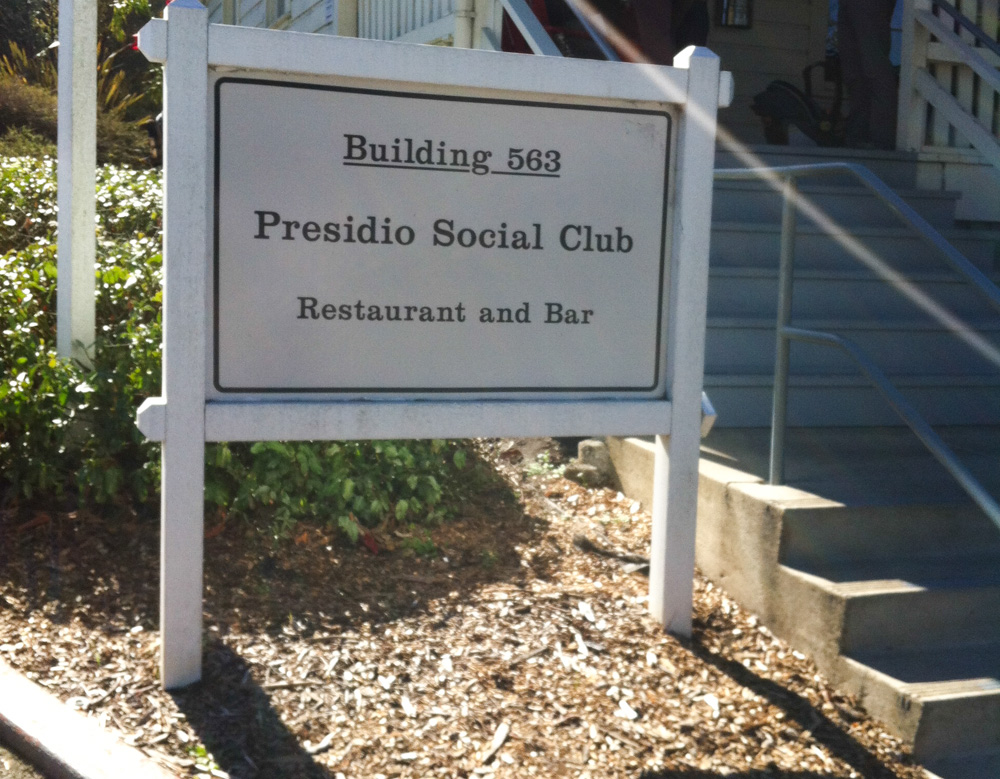 Bits of memorabilia and ephemera serve as reminders that you’re dining in repurposed military barracks: A drum kit in the entry way is emblazoned with the restaurant’s logo, a photo hangs on the wall above our table depicts a 1940s-era social club with a band on stage and couples dancing, skirts frozen mid-twirl.

They’ve recreated the social club feeling and paired it with the contemporary San Francisco food and style. Although it is by no means an intimate setting, it’s a meeting place for friends to catch up or rehash the events of last night (I got to hear the dramatic story of a bride fainting at the altar from a few tables over).  Known for its cocktails and beignets, Presidio Social Club Restaurant is open for lunch, dinner and brunch on the weekends.

Presidio Social Club also hosts great themed specials for dinner throughout the week, including a pig roast on Sunday evenings.

Presidio Social Club is open for lunch and dinner during the week and brunch on the weekends, though they sometimes close for private events, so you may want to check the calendar on their website.

The Presidio Social Club Restaurant has a warm industrial style and a 1940s theme in a renovated military building, divided into smaller dining areas including a backyard patio. A barn-style sliding door, made of wood and glass rather than barn wood, separates the dining area. A long bar runs along the back wall of the main room, adding to the social club feel, and behind it, the liquor bottles are encased in vintage medicine cabinets mounted on the wall. Old fashioned, exposed-filament lightbulbs hang from the high ceilings.

It’s busy and even a bit loud during brunch. The attire was an odd mix of overly casual and overly dressy: people were dressed in anything from workout clothes to their Sunday best.

As a weird side note: the bathrooms were very dark and the too-low windows right next to the toilets seem to always be wide open. What is up with that?

Since it was Sunday morning, the Presidio Social Club Restaurant was busy with the brunch crowd when we arrive around noon. Despite our lack of reservations (and everyone else seemed to have made reservations), we were seated quickly. Our waitress seemed spread thin, but she was polite and extra helpful, offering extra plates to share our dishes before we’d ever mentioned it and checking in after I tried a new drink to make sure I liked it.

Drinks are expensive but not outrageous ($12 for brunch cocktails and $4-7 for specialty non-alcoholic drinks) and the entrees are all under $20. Dinner prices are considerably higher, but you can still find some average priced entrees in the range of $8-17. The serving sizes are not particularly large – the entrée with a shared appetizer was just enough. The bakery items are overpriced at around $5 for a scone or pastry and $9 for the order of 4 beignets.

The brunch menu was heavier on the lunch entrees than breakfast foods, with a few salads, sandwiches, and even oysters and poke.

The brunch cocktail list had some unique drinks on it, so I picked one out that sounded very San Francisco: the Caffe Ferghetti. It was a mix of Caffe Borghetti and the liqueur loved most by San Francisco, Fernet Branca, along with some espresso and cream. This was my first experience trying Fernet Branca, and our waitress calmed my concerns that it might taste like licorice or medicine, describing it as more of a minty flavor and I was all in. I was surprised to find that it was iced, but the flavors worked perfectly and it had none of the mouthwash taste I feared. 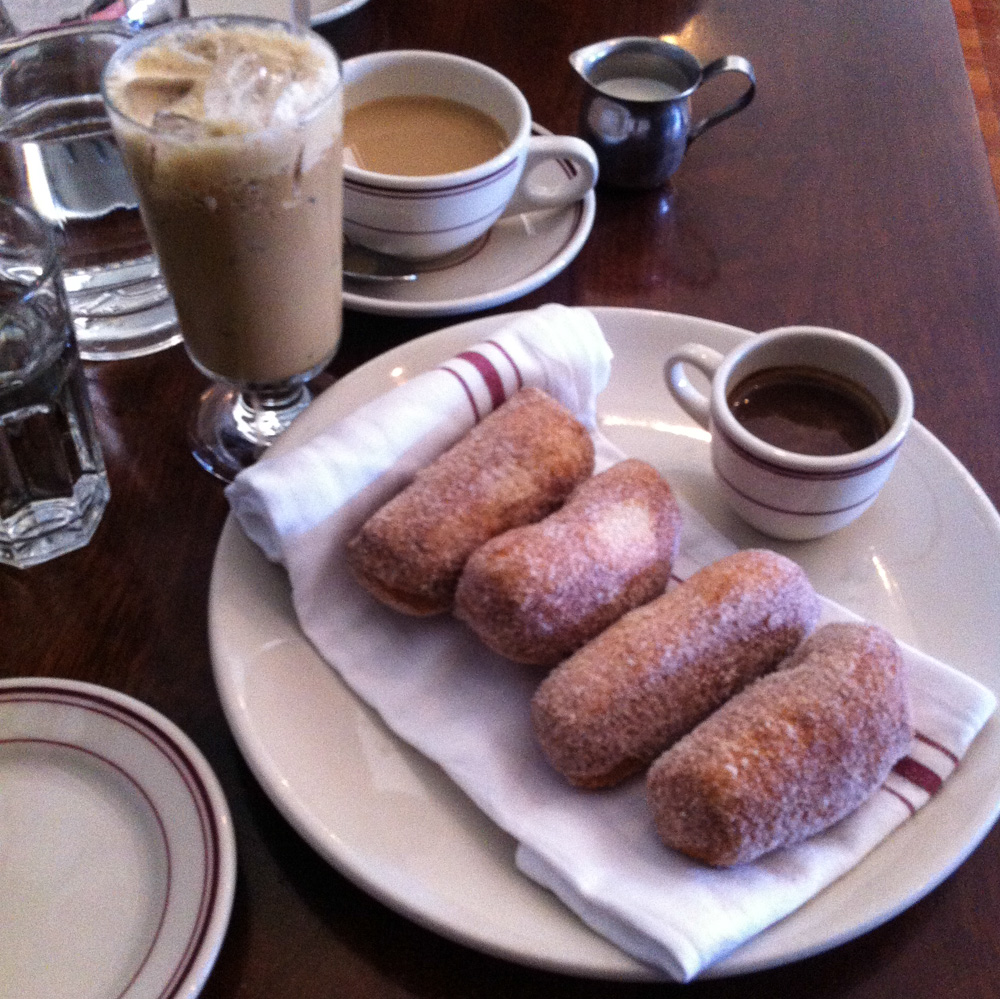 Caffe Ferghetti and beignets with chocolate

We began and ended with the sweet stuff, splitting an order of the brioche beignets to start. They’re served with a tiny cup of brown sugar hot chocolate. The beignets are coated with granulated sugar rather than the traditional powdered sugar. They are not quite as light as typical beignets, and not quite like brioche either. With the sugar and side of chocolate, they were more like regular donuts or even churros (Spanish style, served with thick melted chocolate). The chocolate was amazing and rich, and paired very well with the beignets. I’ve heard that they serve secret-menu chocolate-filled beignets here as well, which I’d return to try. 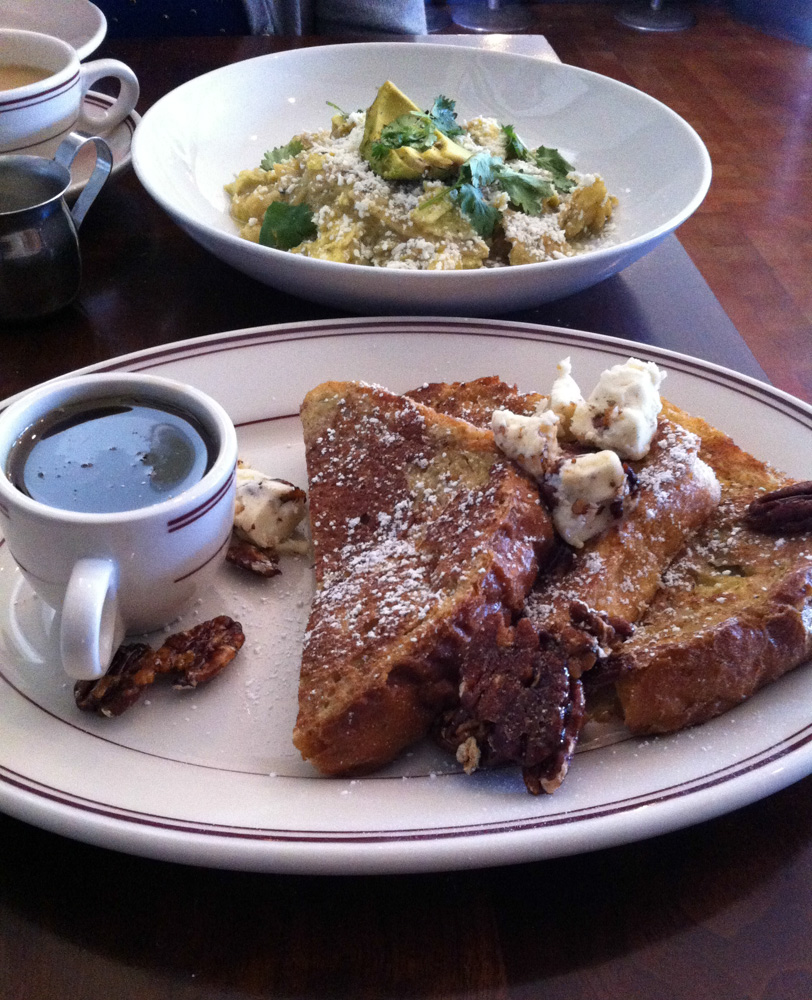 Next, we had the Mission-style chilaquiles of $14.95, which are basically breakfast nachos with tomatillo sauce over tortilla with scrambled eggs, topped with a few slices of avocado, cilantro, and crumbled cotija cheese. The dish was a little one-note — the flavor of the sauce was pretty good but I felt it needed the addition of another flavor or texture. It could have been improved if the tortillas were crispy or there was meat or sour cream. I was glad I was splitting it, because I think it was too much of one flavor to eat the entire thing on my own.

We finished with the challah French toast, topped with candied pecans, pecan butter, and maple syrup. It wasn’t overly sweet like it might sound, but the texture of the French toast was great, not soggy, and the flavors were delicious. My one complaint was that the pecans were glued together in one big clump that was impossible to break apart without sending pecans flying – is that a sign of not very fresh pecans? I also noticed that there was the distinct flavor of cracked black pepper in the clump of candied pecans. Strange, but I didn’t hate it.

Overall the food was decent, the drink was good, and the experience was interesting enough to give it another try some day. 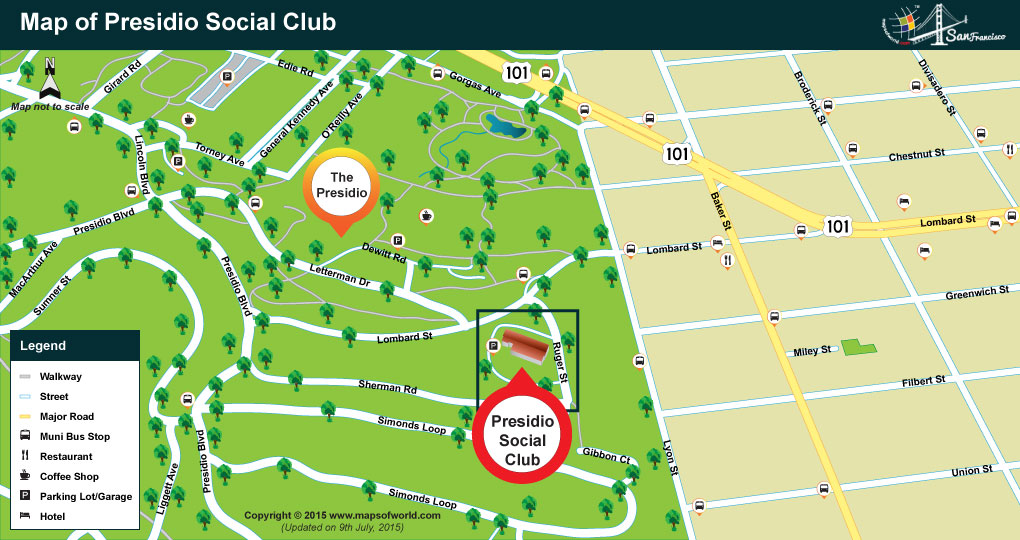