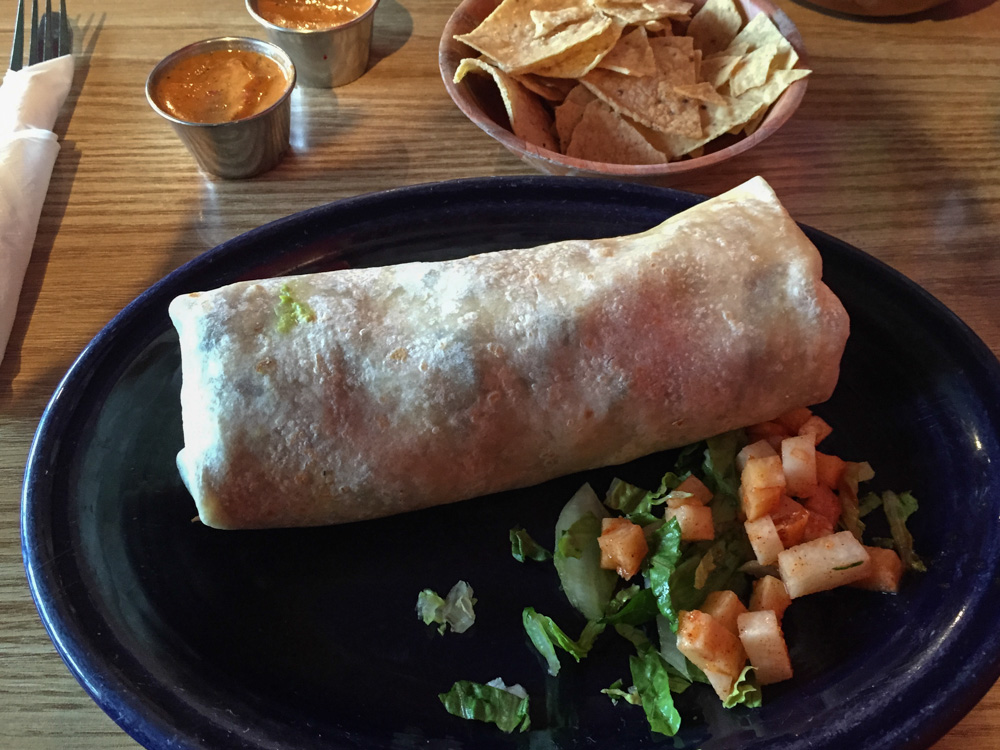 Papalote Mexican Grill is a very popular, highly rated burrito spot in a neighborhood where there are an excess of Mexican food options – that should say a lot.

Papalote Restaurant places itself at the crossroads between real deal Mission-style burritos and the modern California Mexican cuisine, with options like burrito bowls or whole wheat, tomato, or spinach tortillas. This convergence of traditional and modern San Franciscan styles is clear in menu items like the mole, offered two ways: traditional chicken or vegan tofu.

In fact, Papalote restaurant is an excellent choice for vegetarians and vegans, with burrito (or taco or quesadilla!) fillings like marinated tofu and two types of vegetables (potato, carrot, and mushroom or grilled zucchini and eggplant). They even have soyrizo (vegan chorizo) and vegan rice and beans.

On the opposite end, they have the triple threat, which was featured on the Food Network’s Throwdown with Bobby Flay – and won. It’s filled with a combination of shrimp, chicken and carne asada, along with the now famous Papalote salsa. 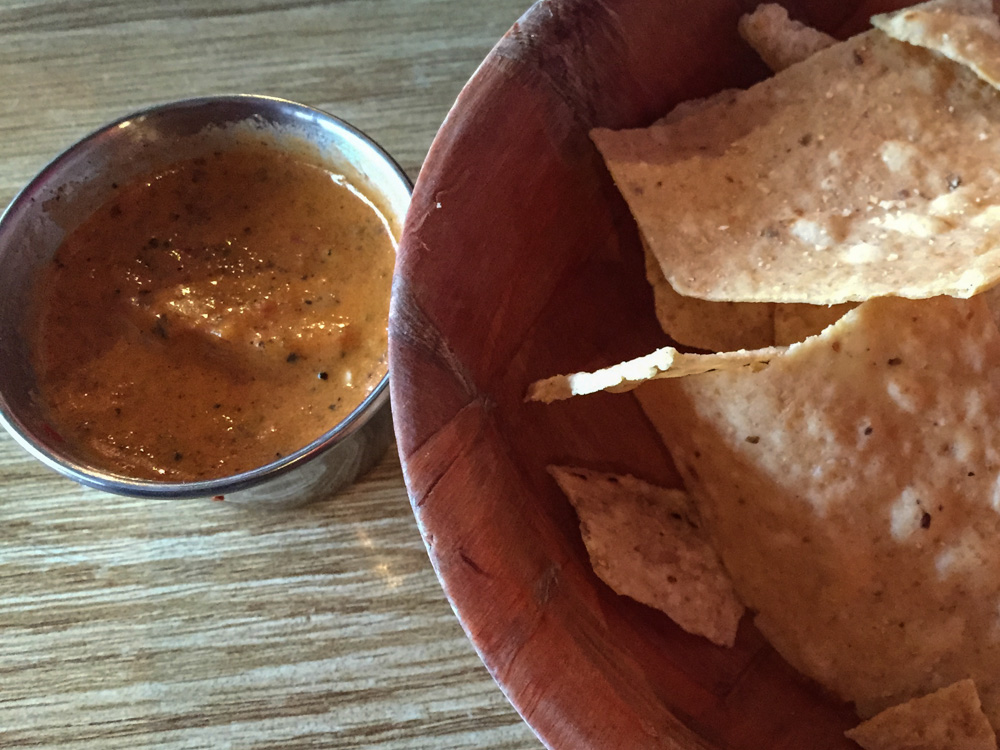 There are two locations for Papalote Restaurant: one in the Mission and the near the Western Addition in NoPa (North of the Panhandle).

Papalote Restaurant is a casual taqueria, with self-seating after ordering at the counter. There isn’t a ton of seating, but I didn’t have to wait at all. The walls are a rotating art exhibit featuring local artists, which takes Papalote from typical to trendy taqueria. When I was there, the featured art was bold graffiti styled paintings with bright colors that when photographed using a flash, they take on a different look. 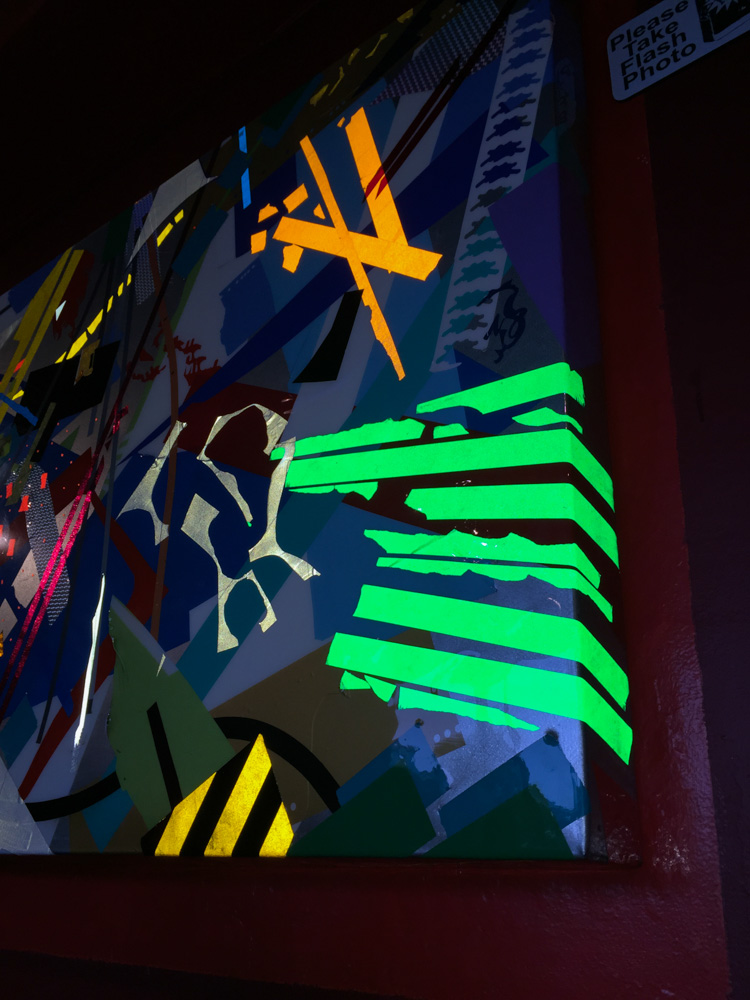 Local art on the walls at Papalote

Everyone we encountered at Papalote restaurant was professional and friendly. Customers order at the counter and seat themselves, while servers bring out chips and salsa and the food. The food came out fairly quickly with no issues.

Most hole-in-the-wall burrito joints offer huge portions at low prices, but Papalote restaurant is on the pricier end of that spectrum. Or maybe it’s a sign of the (gentrifying) times in the Mission. Burritos run from $6.95 up to $12.25 for the seafood burritos, while two tacos cost between $5 and $11. Entrees cost upwards of $15. If you want the Triple Threat burrito, be prepared to shell out about $20. Yes, you read that right.

The menu at Papalote restaurant is set up in an easy-to-understand chart with a lot of options. Choose between two tacos, a quesadilla, salad, or a burrito (or a naked burrito, in which you lose the tortilla). Then pick your filling, from numerous vegetarian options, chicken, carne asada, chile verde, or seafood like shrimp or fish. You can choose between flour, whole wheat, Roma tomato, and spinach tortillas, and pick from whole black or pinto beans, or black refried beans. That’s a lot of options. Those all come with rice and beans and pico de gallo, but you can make it a super burrito with sour cream, cheese, and guacamole for about a dollar. It is my opinion that burritos must at least have cheese, so the super burrito is an obvious choice.

They also serve nachos, plates of mole or chile verde, fajitas, and breakfast, including breakfast burritos.

The server brought out chips and salsa for each person while we waited for the order. Papalote restaurant is famous for its creamy orange salsa (they sell it by the bottle), and I can see why. It’s not super spicy, but it definitely has a kick. It’s very good on the chips or added to the burrito.

I decided to get a carne asada burrito with a flour tortilla and black refried beans. Super, of course. I also tried the grilled veggie super burrito with black refried beans as well. The burritos were decent sized, though certainly not as big as some others around the Mission. I just about finished mine, which could mean it was smaller than usual or it was just that good, I’m not sure. But it was good. The carne asada was tender and juicy and the black refried beans had great flavor. The burritos are served with a side of lettuce and jicama for a little fresh crunch. 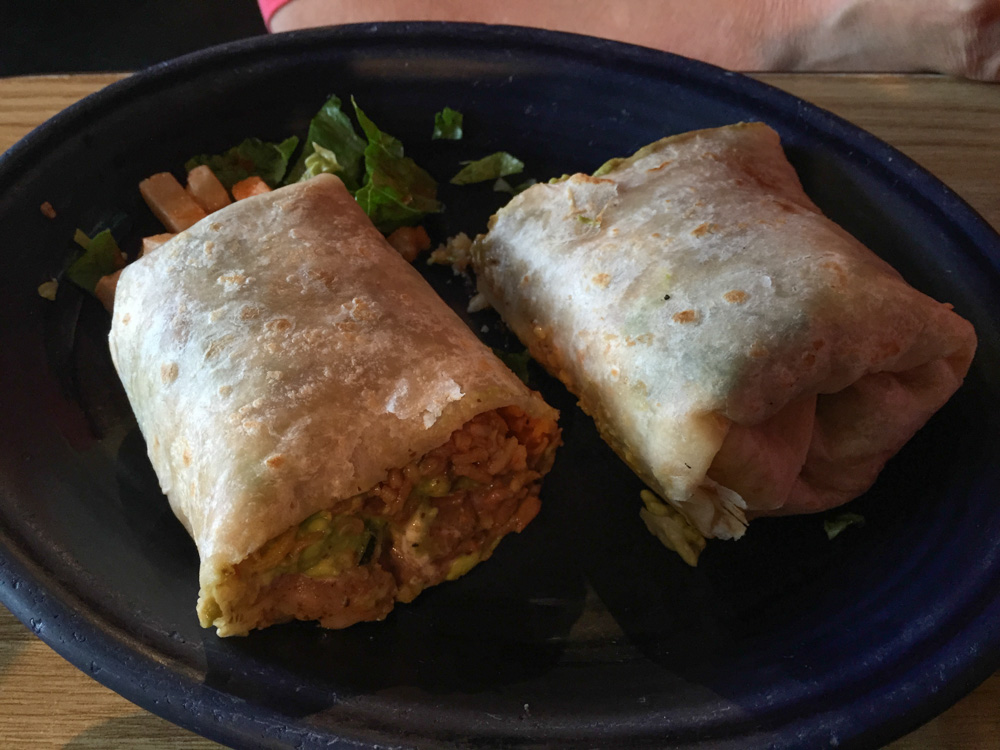 The grilled veggies were an unusual filling, but I loved it, possibly even more than the carne asada. The zucchini and eggplant were sliced into spears and perfectly flavored from the grilling. I was surprised at how delicious the vegetables went with the beans and rice, and I didn’t miss the meat at all.

The burritos did not come wrapped in foil (though they had foil out for you to wrap it yourself), which made me realize how much that foil wrapper helps hold the burrito together. It was not easy to eat, but worth the struggle.