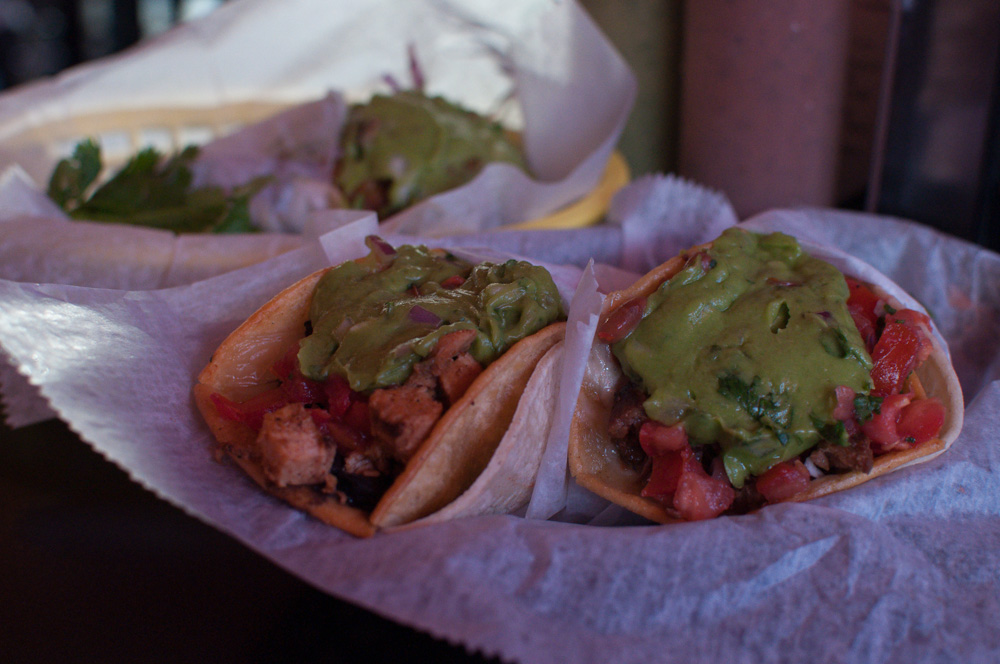 Nick’s Crispy Tacos serves Baja-style Mexican food in the Russian Hill neighborhood of San Francisco. Nick’s is known for its tacos, especially those served “Nick’s Way,” meaning crispy and topped with jack cheese and guacamole. Word on the street is that these are some of the best tacos around. I was in the area one afternoon and decided to put those rumors to the test.

This isn’t your typical taqueria, though. In fact, as I walked down the street looking for Nick’s, I nearly passed it. I just wasn’t expecting to find Nick’s Crispy Tacos inside of Rouge Night Club, but there it was, tucked away into the front corner. This is the result of an interesting partnership between Nick’s and Rouge, in which the space doubles as a club by night, as well as serving tacos late into the night. It makes for a unique dining experience as well as a convenient late-night grub spot.

Nick’s Crispy Tacos Restaurant is located in the Russian Hill neighborhood of San Francisco, on the corner of Broadway and Polk. The restaurant is just off of the 101 in a cute neighborhood not far from Lombard’s crooked block. Street parking is the best bet, which takes a bit of looking but was not too difficult to find. 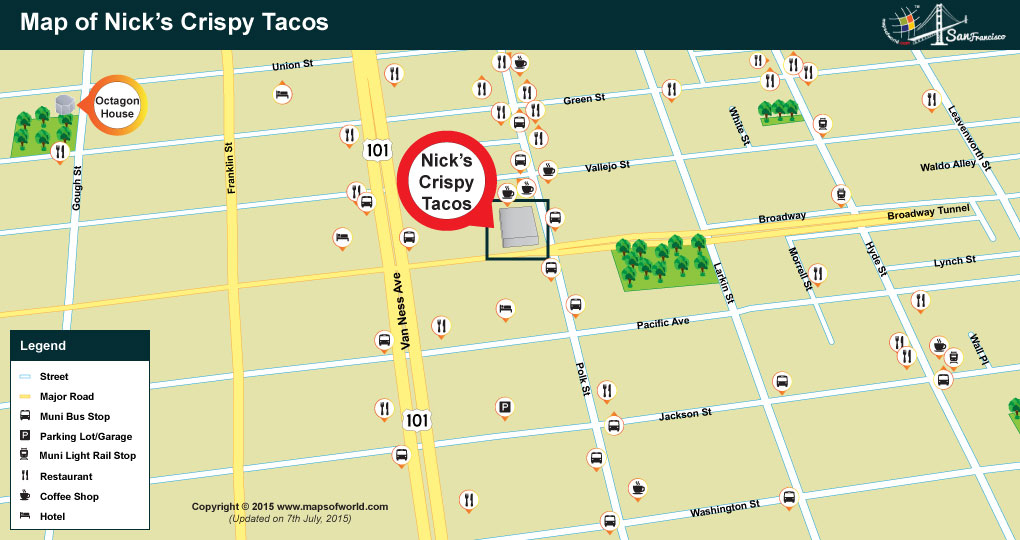 Nick’s is certainly not your mariachi-and-murals Mexican joint. Since it moonlights as a nightclub, Nick’s décor is quirky and maybe even confusing. While the exterior is dark and elegant with gold details, the inside plays to the club’s name and is bright and red: red curtains and red semicircular booths, red walls, and even a red ceiling, from which dramatic crystal chandeliers hang. It’s clearly a taco shop inside of a club rather than the other way around. In the bright daylight, the red on red is a bit overwhelming, though I imagine it looks great in low light. 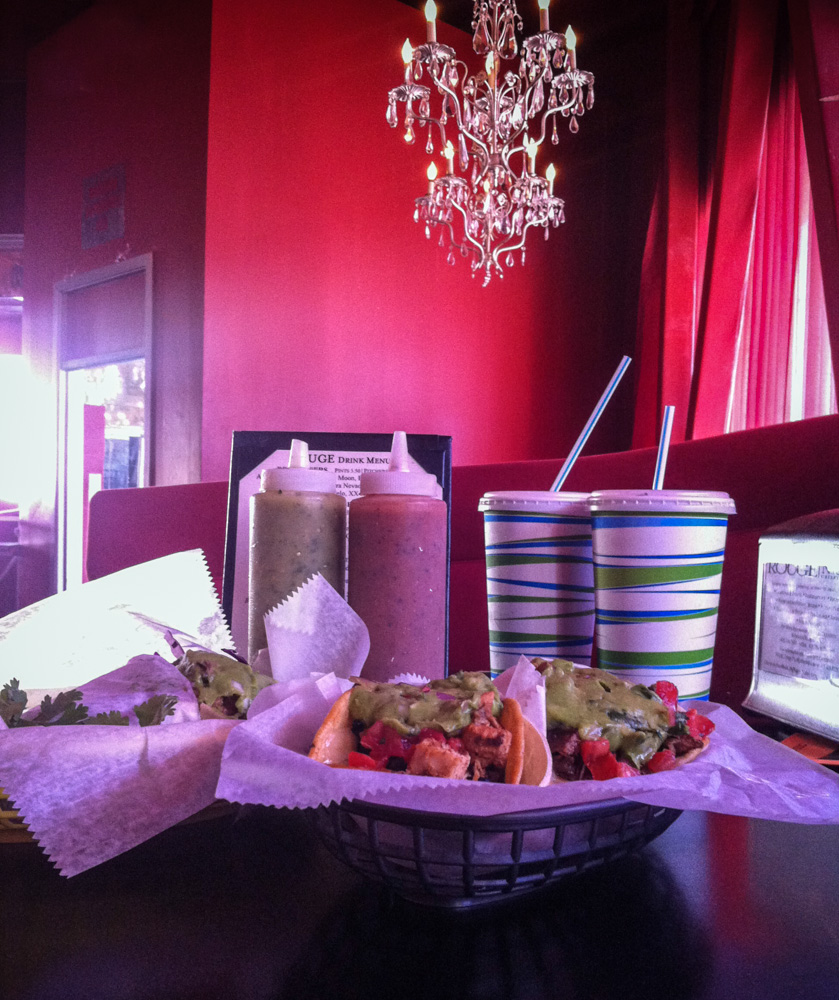 The counter for Nick’s Crispy Tacos Restaurant is situated in the far corner of the room next to the side door. This is the only area of the place that somewhat resembles a taco shop, with the large menu posted on the wall and the agua fresca on display. There’s also some outdoor seating.

In addition to the taqueria and night club vibes, there are also some aspects of a sports bar. A massive bar is situated in the center of the room, with giant screens all around showing whatever game is currently on. The food is served in red plastic baskets. The ambiance is a bit confusing during the day, but the concept of the multi-use space is interesting and smart, too.

At Nick’s, you place your order at the register, pay upfront, then take your number and seat yourself (if the tables aren’t all full). A server brings out the food. I visited during the day, so it wasn’t crowded and we grabbed a booth right away. Everyone was really friendly and helpful, making great recommendations for what to order.

If you get your tacos the regular way, the price is above average for tacos, at about $4-6. This isn’t the Mission District with its super cheap Mexican food. But if you get them Nick’s way – and you should – it adds $1.25 per taco, turning them into $5-8 tacos. That said, they’re really full and two tacos per person was plenty for us, especially if you add some chips and salsa.

On Taco Tuesdays, Nick’s offers $2 tacos. It’s a great deal, but be prepared to trade that saved money for an investment of your time – the lines are long and it gets crazy busy.

Since the name of the place is “Nick’s Crispy Tacos” I decided I would try the crispy tacos, “Nick’s Way.” With recommendations from the guy at the register, I decided on one carne asada taco and one pescado taco, both Nick’s Way, crispy with jack cheese and guacamole. It’s Nick’s Way or the highway – after trying it, I wouldn’t have it any other way. It was a typical two corn tortilla taco, except the inner tortilla was lightly fried and crunchy, while the outer one was soft – an inventive change that added another dimension to the taco and made it easier to eat. The tacos are wrapped in a way that also makes them much easier to eat, although they’re stuffed so full that it’s inevitably messy (so if you come when it’s busy and can’t get a seat, it may become an issue).

The pescado taco is a Baja-style taco with seasonal fish, which was red snapper that day. The other toppings included shredded cabbage, onions and salsa, cilantro and lime mayo. The fish is breaded and perfectly crispy. This is probably the best fish taco in San Francisco.

The carne asada taco was also delicious. If I returned, I would try the fried chicken taco and order the pescado again. Nick’s Way, of course. Overall, Nick’s has somewhat Americanized Mexican food with a modern flair and great fresh flavors.

Nick’s also has incredible drinks (at least the non-alcoholic ones – I haven’t sampled their adult beverages yet). I had the strawberry agua fresca which was sweet, refreshing, and amazingly delicious. I also got to try the horchata, which had great flavor.  but there’s no denying that these are great tacos.