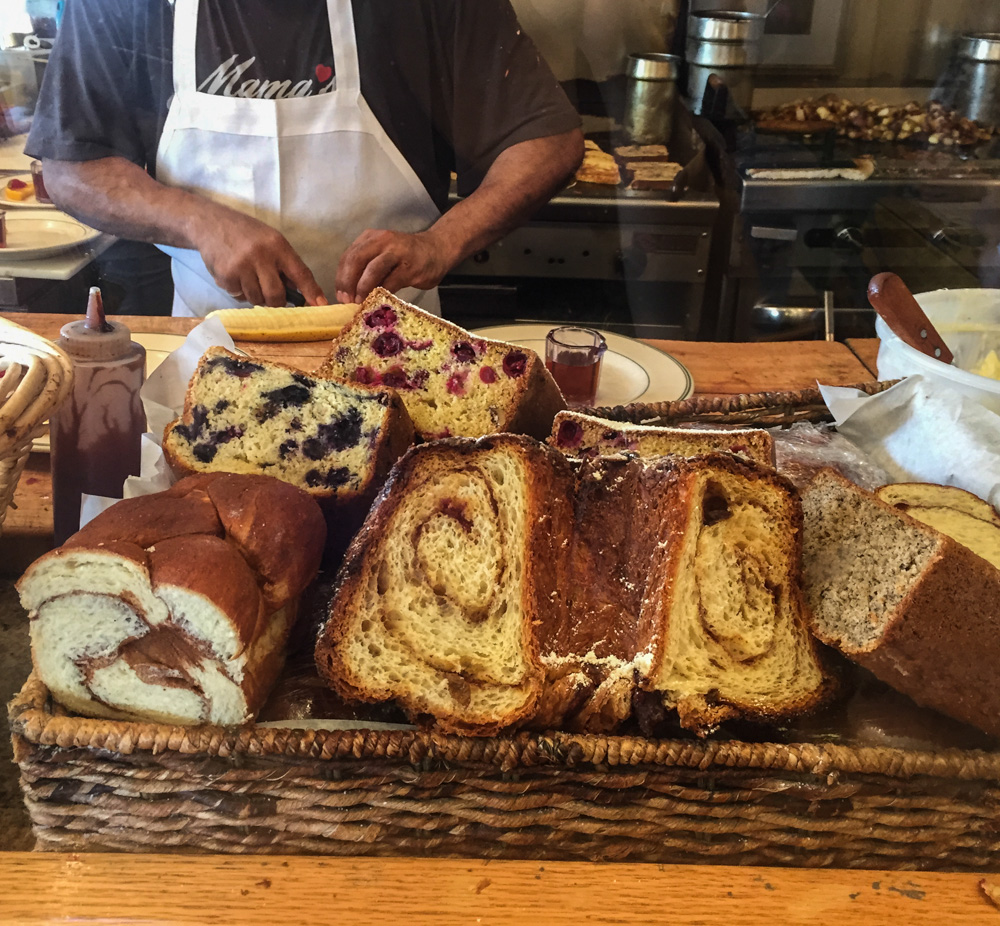 Mama’s combines two things that San Francisco loves: Sunday brunch and waiting in ridiculously long lines. Okay, I know no one really likes waiting in lines, but I’ve noticed how willing the people of San Francisco are to spend hours in line for something that’s considered the best. Though I guess I’d have to count myself among those people, I’m not willing to make it a regular thing – once to try the place out is enough for me. I wanted to see if Mama’s lived up to the hype, so I made plans one Sunday morning. The line didn’t seem too long, wrapping just around the corner, past the restaurant and the building next door.

This time, we came prepared and brought along books to pass the time. What we didn’t expect was for it to be that hot in August in San Francisco. The employees at Mama’s were kind enough to bring out cups of water for those of us waiting in line, and a few doorways and awnings offered small areas of shade. But the length of the line and the heat hardly bothered me, thanks to my book. Instead, the main source of irritation on this occasion was the boisterous girl behind me in line, who squeezed herself into the narrow doorway in which I was standing. Girl,  we all want to stand in the shade, but we both don’t fit in this tiny doorway and your sweaty body pressed up against mine is just making things worse, so back up!

After almost an hour wait (not bad), we were allowed inside to wait a little longer to order, and then a little longer to be seated. By the time we left at around 1 pm, the line was quite short, so if you’re interested in trying it and refuse to wait, try stopping by in the afternoon or on a weekday (or start lining up at around 7:30 am, before it even opens).

Mama’s is located in San Francisco’s North Beach neighborhood, on the northeast corner of Washington Square Park. Parking in the area can be tough to find, though there is metered (and sometimes free) street parking in the neighborhood, and a few nearby garages.

Tuesday through Sunday – 8 am to 3 pm

The restaurant is casual and homey, like visiting your grandparents’ house. There’s antique furniture and flowers on the tables. There’s an old menu on the wall showing the prices and some strange offerings from 1967, the year Mama’s opened.

The kitchen is open, with the delicious breads and other baked goods on display, enticing me to order more than I should. 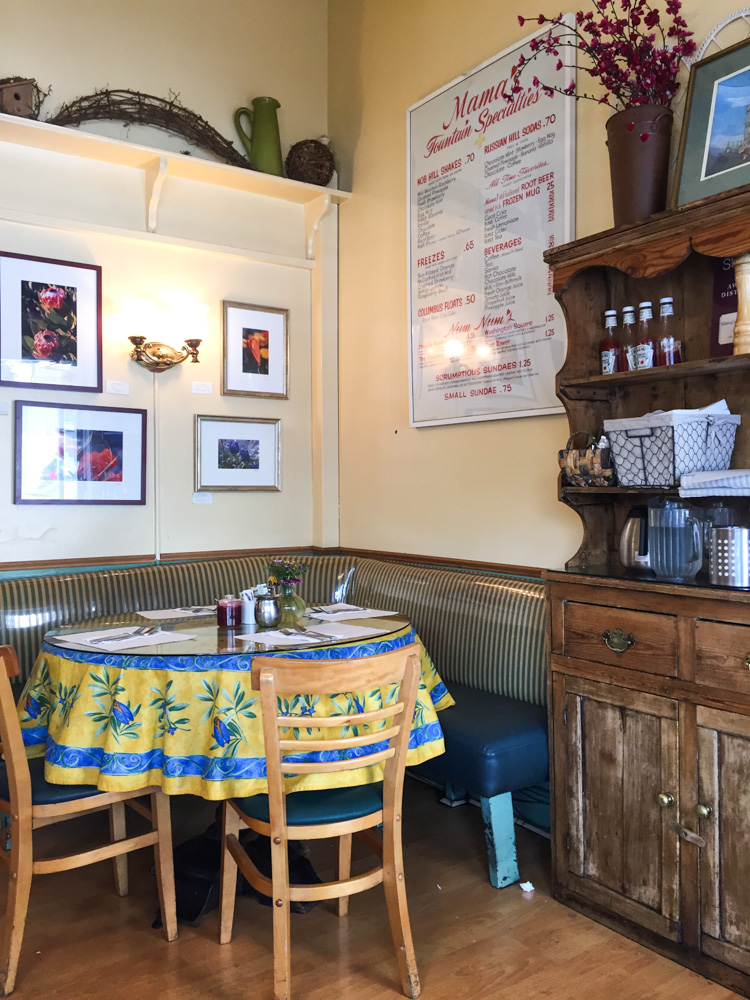 A cozy corner at Mama’s

The seating area is fairly small and cozy, with tables close together and only a few tables that can accommodate larger groups. It seems clean and it’s bright and sunny.

The one issue (aside from the lack of seating) was the restroom. While it was decently clean, it’s very old and about the size of an airplane restroom. To get to it, you have to pass through part of the kitchen and head outside and down the stairs. There’s only one room, and there’s nowhere really to wait for your turn, because a member of the staff will need to squeeze past every few minutes.

Aside from wait times, the service at Mama’s is very good.

The staff at Mama’s was friendly and seemed sympathetic about the heat and the long wait times, rather than stressed out by it. The folks I encountered as I passed through the kitchen and outdoor space were all smiles and full of patience.

The waiter we had was one of the best I’ve ever had. Though he was very clearly busy serving quite a few tables, he took the time to make friendly, funny conversation. He insisted we try the homemade jam and appeared out of nowhere to lift the top off the jar the second I lifted my fork to begin eating the French toast. It was as if he could read my mind at times – I only had to look at him quizzically while trying to finish chewing my food, and he answered my unspoken question: raspberry. The guy is good. 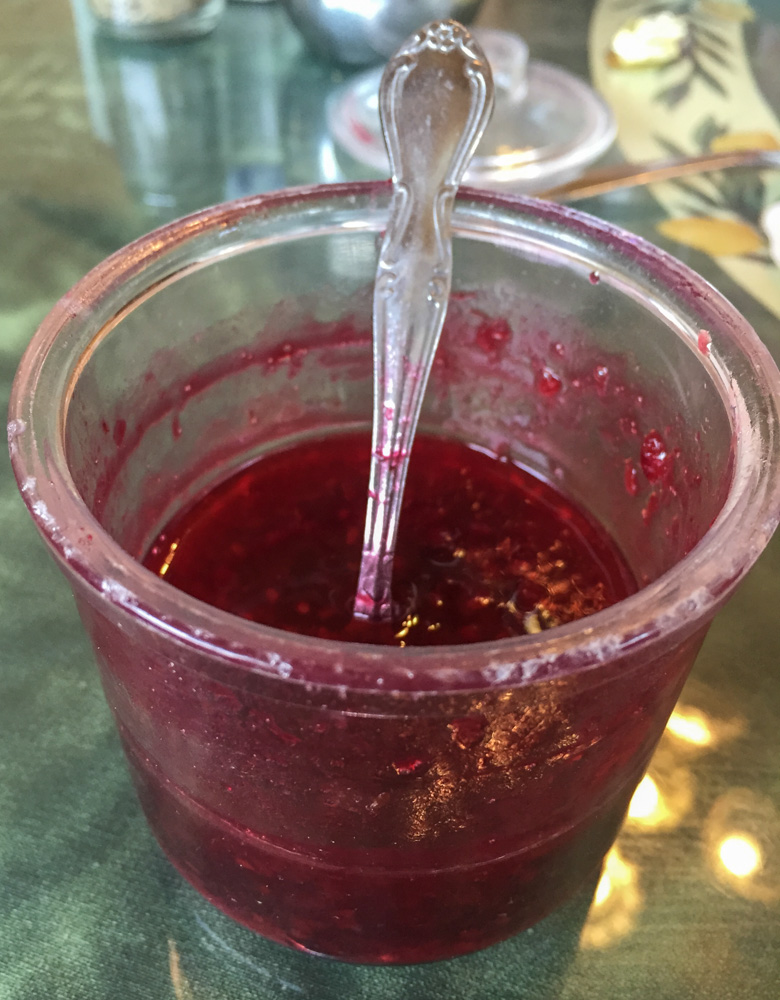 The prices at Mama’s are pretty standard, with entrees ranging from about $9 to $15, mostly on the upper end of the range. Alcoholic brunch drinks like mimosas cost $7 each, while coffee and espresso drinks cost $3-4 and smoothies are $6.25.

Bring cash! Mama’s does not take credit cards, but they do take debit cards for a small fee.

After that wait, we were pretty hungry and I was ready to order one of everything on the menu. They serve some hearty comfort food, however, so don’t go too crazy. I’d recommend sticking to breakfast foods, though they do have some good sounding lunch items. The menu features omelets, scrambles, and benedicts with crab or other variations on the classic, like prosciutto, pancetta, or bacon. There are pancakes and a whole list of French toast, made with fresh baked breads of various flavors.

They also have quite a few decadent drinks on the menu, including some fresh squeezed juices. I had a grapefruit mimosa, which I worried might be bitter but it was very refreshing on this unseasonably hot day.

I split one savory dish and one sweet dish, which is the best way to brunch. It’s like having breakfast and then breakfast-dessert in perfect portions. 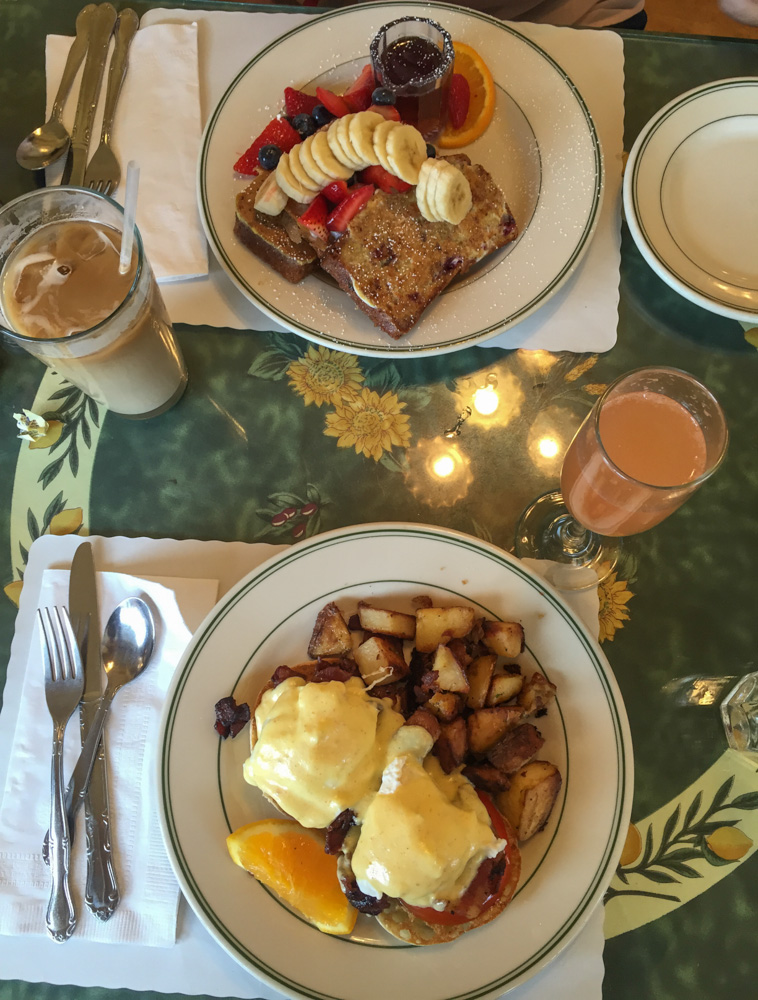 I chose the Blackstone Benedict, which the menu explained came with crispy bacon and a grilled tomato. It lived up to its description, with some of the crispiest, most delicious bacon I’ve had. The eggs were perfect, the hollandaise was flavorful, and the tomatoes balanced everything out. It was one of the best eggs benedicts I’ve ever eaten, and it was served with crispy country potatoes. I would return to order the same thing.

For the sweet dish, we got the French toast sampler, which came with one slice each of cinnamon bread, banana walnut bread, and cranberry-orange bread, and was topped with a pile of fresh fruit. They were all tasty, but the cranberry-orange was the clear winner. As recommended by the waiter, we sampled the raspberry jam, which was quite delicious. It would probably be best on something with simpler flavor, like toast, since there was so much going on with the French toast already, but I’m glad I got to try it.

We finished every last bite. I didn’t eat dinner that night.

We had succumbed to temptation while waiting to order, and ordered a slice of one of the crumb cakes on display. Though there were varieties like blueberry and apple, we went with the old fashioned and took it to go because we were stuffed. I enjoyed mine the next morning, and absolutely loved it. It also lived up to its name, falling apart into a million crumbs with every glorious bite.

After my meal at Mama’s, I can understand why this brunch spot is so popular with tourists and locals alike. For once, I’m tempted to say that the experience was worth the wait.