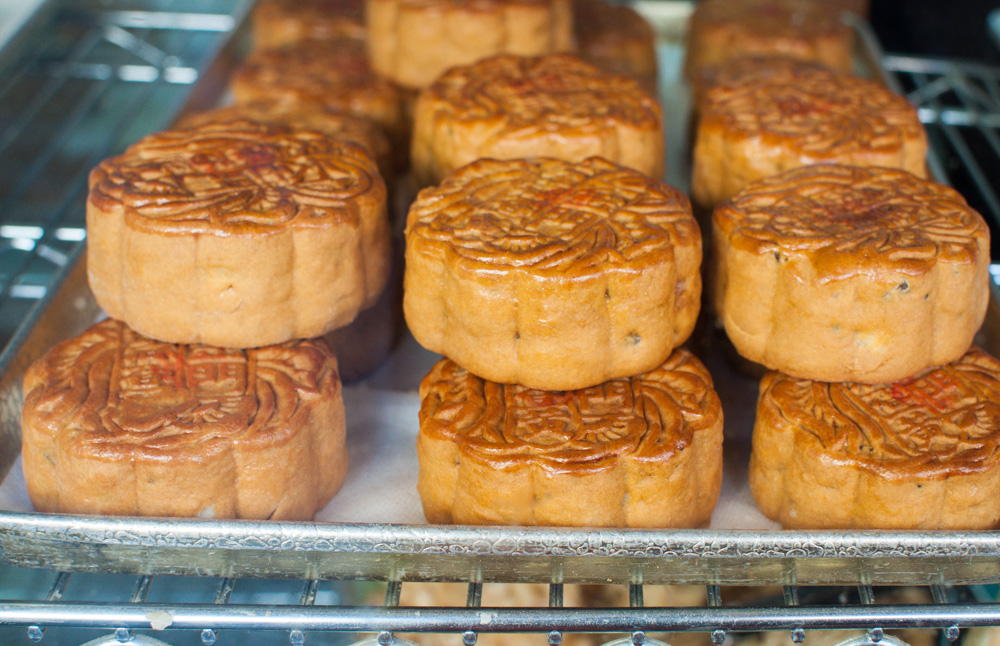 Mooncakes in the window of Golden Gate Bakery

I waited in line for three hours.

It might have been the sunk cost fallacy – it gets me every time. Sure, the line was long, flowing out the door and curving back down the street. But it wasn’t that long. I’ve waited in long lines before without severe time loss. The problem was that the line didn’t move. I mean, at all. I left for a while to grab some milk tea and use the restroom at a shop around the corner. When I returned, we had only moved closer because several people ahead of us in line had given up and defected. That was the source of about a third of the movement during those three hours.

It might have also been because the last time I stopped by, the sign in the window indicated that the owners were away on vacation, which I later learned happens frequently, and for several months each summer. I’ve heard rumors that one of the owners is sick and that’s why they dedicate time to travel each year. I’ve also heard that they close at the end of summer to bake in preparation for the Autumn Moon Festival. This Chinatown bakery is known for unreliable hours, and a fan-run website is dedicated to announcing whether the Golden Gate Bakery is open each day. On this day, the site had not been updated, so it was to my pleasant surprise that I found the line formed in front of its doors. Little did I know.

I’m a fairly patient line-waiter (unless everyone around me is complaining about it the whole time, and then I rage). I probably wouldn’t even mind doing it professionally, like those people who get paid to wait for the latest iPhone or cronuts. It does allow for some interesting interactions with the other people in line, most of whom eventually gave up the fight. I had plenty of time to learn about the treasures that awaited beyond that glass door: mooncakes and egg custard tarts are the specialties. These same treats are available at every other Chinese bakery around here – and without the line.

We found out that there are several types of mooncakes, including some filled with bean paste and others with lotus or pineapple or nuts. The helpful woman behind us in line advised, “The best one has mixed nuts and ham.” Mixed nuts and what? Oh, I thought it was cake. Another woman asked “Do you like Chinese bakeries?” and when I said yes, (no, I just love lines) she raised her eyebrows. I asked if she was surprised because Chinese baked goods are not very sweet, and she confirmed my suspicions and added “American bakeries are too sweet.” I get it. There’s no chocolate or frosting anywhere in sight here.

There were no egg custard tarts (dan tat) in the window either, only mooncakes in two sizes, coconut macaroons, and some thin, brown and white cookies. Someone in line popped in to make sure they were selling egg custard, and we found out that waiting for egg custard to come out of the oven was what caused most of the backup. At least we didn’t need to worry about the shop running out completely and turning us away.

We also learned that the Autumn Moon Festival was coming up and that people were coming in to buy large quantities of mooncakes for the occasion, to share with family and friends. The treats are only available during this season. We watched customers leave the shop with more than 10 boxes of mooncakes (which, at around $10 per cake and 4 cakes per box comes out to some serious devotion).

Like the hundreds of tourists who passed by the line remarked, “Must be good!”

We finally reached the store front, watching through the glass, revived by the anticipation. We watched the women hustle around behind the counter, and we watched as customers exited the tiny shop infrequently, each carrying stacks of pink cake boxes or the multicolored mooncake boxes. I half expected each customer to step out of the shop and lift their bounty high for the rest of us to marvel at and cheer their victory (no one did).

When we finally reached the counter, we felt compelled to order a lot, to justify the hours of waiting. I imagine that’s how some customers ended up with so many boxes. We resisted, and settled for half a dozen egg custard tarts (at around $1.50 each), a regular mixed nut and ham mooncake (about $10.50), and one of each of the two types of mini mooncakes ($3.50 each). We ordered and paid ($25.90), and then we waited. About five groups of customers did the same, and we all continued to wait. The women working were moving quickly, answering phones and boxing up mooncakes. They shouted through the intercom to the bakers down in the basement. We heard clanging in response, back through the speakers, then words of acknowledgement (“We’re working as fast as we can!” I imagined they were saying). About 15 minutes later, two baking sheets filled with egg custard tarts appeared; yellow disks of sunshine. There was a frenzy as the tarts were divvied up among the orders. The edges of the bakery boxes were cut as vents for their heat. And finally, we were on our way, carrying the prized pastries carefully past the long line that still stretched down the street. 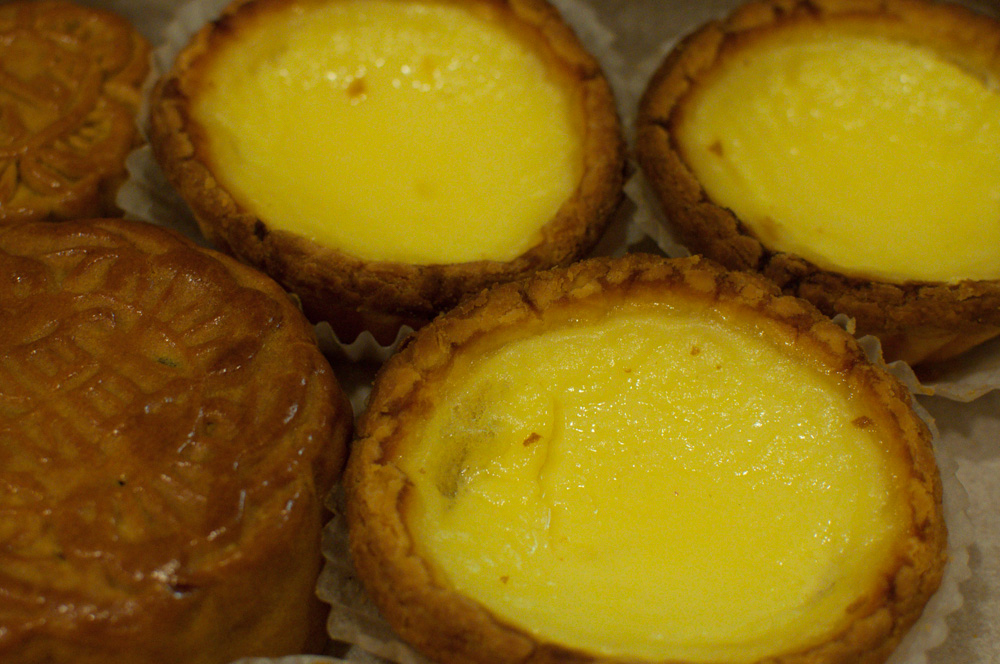 We tried the egg tarts first: impossibly flaky and light crust held soft and creamy egg custard. It reminded me of the custard my (not Chinese) grandma used to make, minus the cinnamon and plus the crust. Delicious, both of them. The tarts are a decent size at about 2.5 inches in diameter. 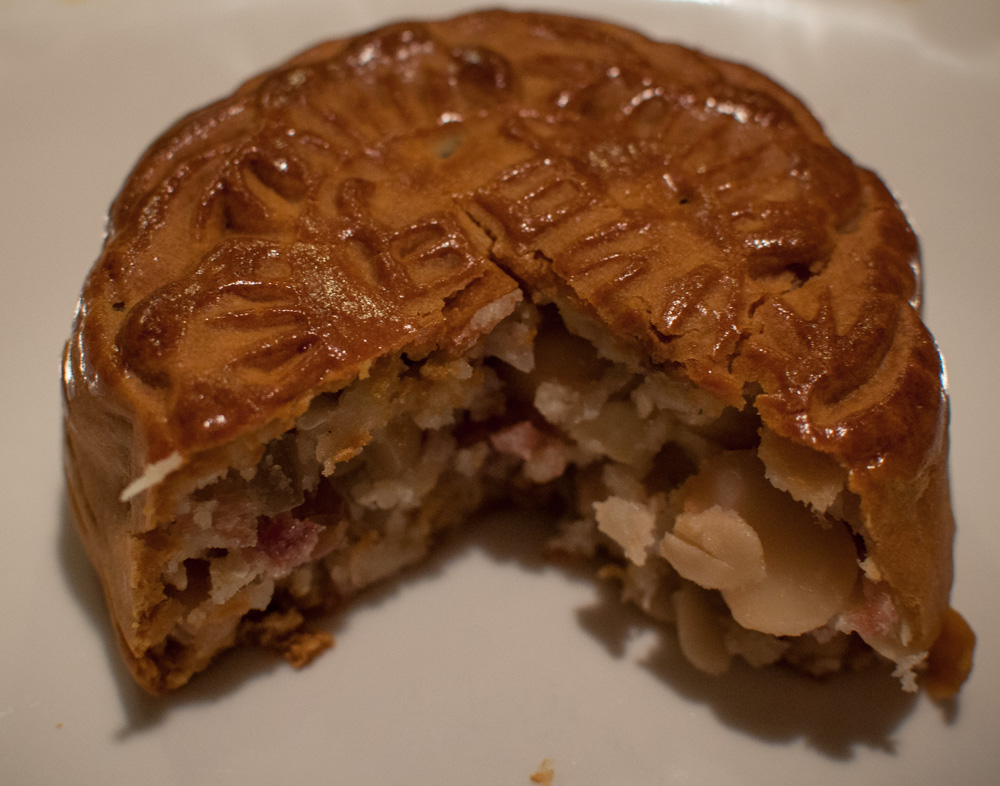 Inside the mixed nut and ham mooncake

The mixed nut mooncake was what I imagine mince meat pie blended with fruitcake would taste like. I don’t mean that like a bad thing, either. It was the strangest delicious food I have ever eaten. I expected mostly cake with a bit of filling in the middle, maybe finely crushed nuts and tiny bits of ham. This was a mixture of big chunks of macadamia, peanuts, slivers of almonds, what I think was candied pineapple or melon, and bits of ham, encased in a thin layer of crust. The ham was surprisingly delicious in the mix, and also surprisingly added the sweetness. The taste was confusing, but in a good way. The mini mooncakes were bean paste and lotus filled, and both were mostly filling surrounded by a thin layer of cake. The lotus was a caramel-colored paste, which was very sweet and a bit sticky. The bean paste was also sweetened, though less so, and still tasted distinctly like beans. The larger mooncakes were available with egg yolk in them for an additional cost per yolk (which I did not try, but certainly will next time). The yolk is meant to represent the moon as part of the Moon Festival, to celebrate the Chinese myth of the Moon Goddess Chang-O (or Chang’e) who lives on the moon. The crust of the cake is imprinted with Chinese characters, including the bakery’s name and the type of filling inside. The mooncakes seem overpriced to me, at around $10 each for a cake 3 inches in diameter and about an inch tall, but they’re clearly eaten seasonally as part of a holiday celebration and they seem difficult to make, so that accounts for the high prices. Plus, the cost did not stop anyone from buying dozens of them.

Would I come back to Golden Gate Bakery for mooncakes and egg tarts? Absolutely. I would also like to try some of the other baked goods. Would I wait another 3 hours for mooncakes and egg tarts? Absolutely not (although I would have said no before, too). I would recommend trying Golden Gate Bakery on a weekday and not right before the Moon Festival, and giving yourself plenty of time, because you might be there a long time. 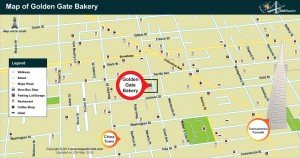