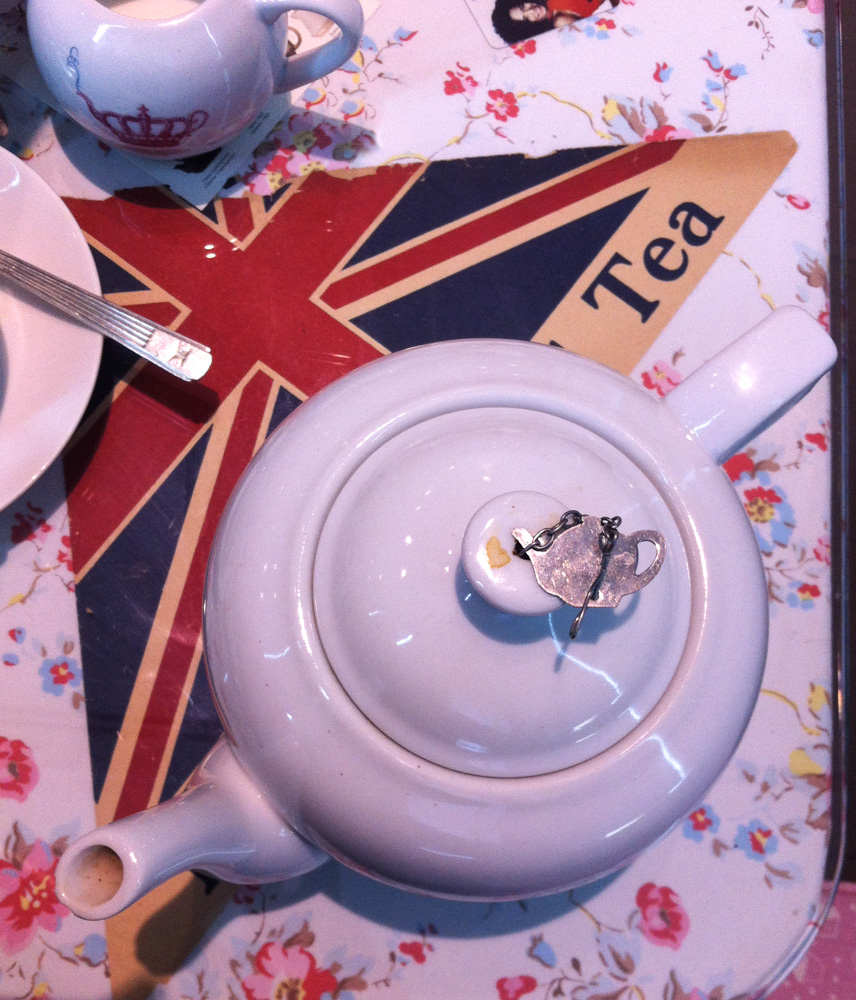 Tea at Crown and Crumpet

Crown and Crumpet Tea Stop Café Restaurant is a great modern tea room, offering dainty sandwiches, delicate desserts, and a wide variety of teas (when they’re in stock!). The menu divides the many teas into categories: black, green, premium, oolong, white, fruit and herbal. Some of the special varieties included Alice’s “Drink Me” Tea (without the shrinking) and the Queen of Hearts (without the beheading), and Marie Antoinette (also without the beheading). It’s a great spot for a classy afternoon with girlfriends, a ladies luncheon, bridal and baby showers, and of course, tea parties.

The shop relocated from their first tea room at Ghirardelli Square and restarted with a sophisticated and modern take on tea. They’re not stuffy or fussy. Their slogan is “A room with tea and wit.”

The cute name and clever logo let you know what you’re in for – an afternoon of pretending to be British royalty. While coffee culture still dominates the scene, it’s sometimes nice to put on your British accent, lift your pinky and enjoy a spot of tea. 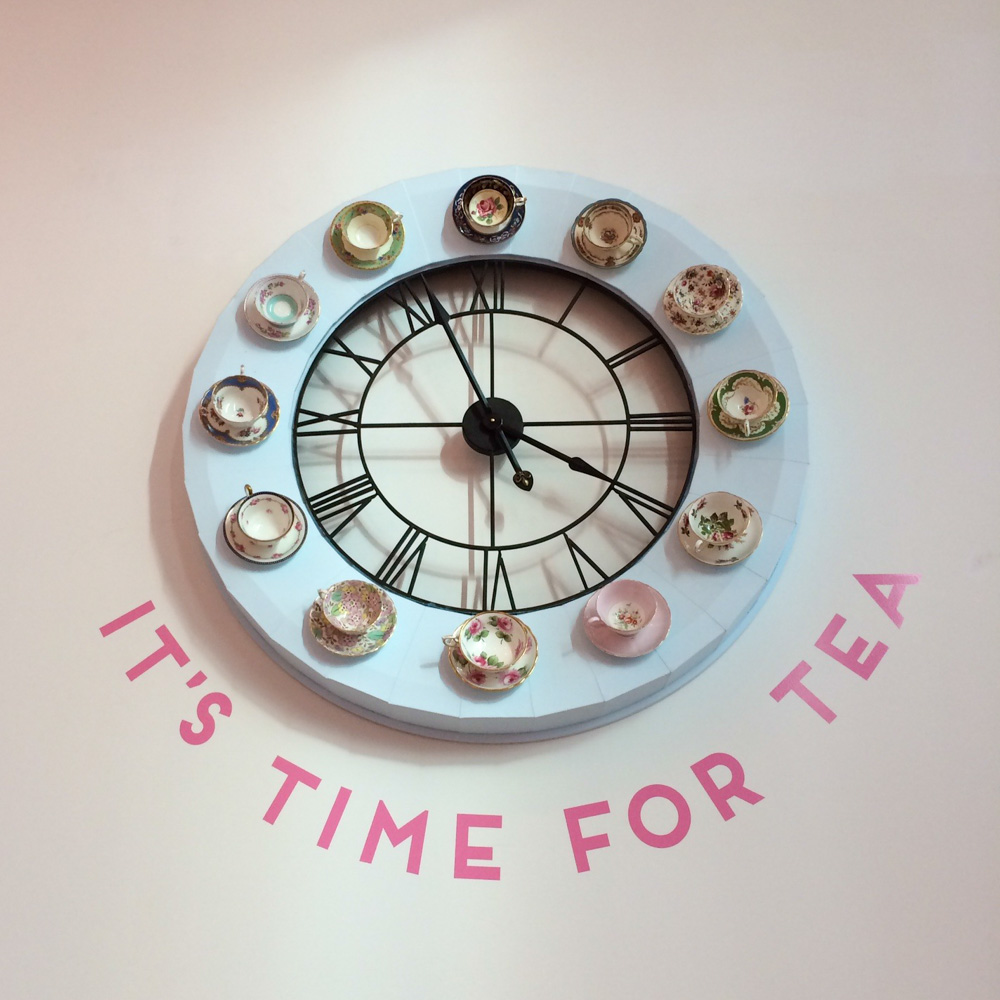 Crown and Crumpet Tea Stop Café Restaurant is located in Japantown in the New People Building. There’s street parking, and parking at the garage across the street, but Crown and Crumpet doesn’t validate (it cost us about $10).

Crown and Crumpet Tea Stop Café Restaurant is modern and somewhat casual for a tea shop. There are no antiques in sight (which is especially surprising when you learn that the owners are antique lovers and previously owned an antique shop in San Francisco), no lace or the fussy mismatched cups and saucers in pastels that you find at other tea rooms. The dishes are simple and white, with the Crown and Crumpet logo printed in pink; the saucers with cute quotes on them, like “Gossip and scandal are the best sweeteners for tea.” A sign above us on the wall declared a doily-free zone, but other than a section of framed art, it’s fairly sparse. 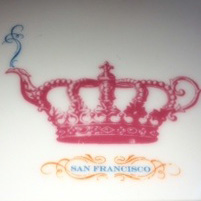 The Crown and Crumpet logo on the dishes

That’s not to say there weren’t plenty of charming touches, and it’s unmistakably a British tea room – there are Union Jacks and Spice Girls in addition to the floral tablecloths and roses on every table (though ours weren’t the freshest). Perhaps the décor choices were influenced by the café’s location in Japantown, with its simple modern style. It might be a good introductory tea room, where you can bring your husband without overwhelming him with girly things.

The café is open and bright and cheery, but it’s located at the entrance to a mall, sectioned off by a rope rather than a wall. This makes the experience much less formal, because it’s like having tea in a lobby or a food court, but it wasn’t very busy that day, so I hardly noticed.

Up the stairs, Crown and Crumpet has a small tea room with a long table (and what looked like plenty of girly décor) that can be rented out for private tea parties.

One of the owners, a man with a British accent took our reservations over the phone and helpfully explained the location and nearest garage. He seated us quickly when we arrived.

Our waitress was sweet and personable, and I could tell she made an effort to connect with the young girls enjoying their tea party. She also offered to take photos for us and took care to make them good photos.

The cost for afternoon tea is about $30 per person (with an additional fee for the premium teas). Though doesn’t look like a lot of food, with its miniature portions, it was more than we could eat and kept me full for hours. A smaller version, Nursery Tea, is available for half the price to children and seniors. Other lunch dishes cost around $10-12, while just tea is $7 for a large pot or $5 for a small one.

We came to Crown and Crumpet for Afternoon Tea (High Tea) for two.

I was disappointed to find that they were out of several of my first choices for tea. The waitress explained that they were transitioning from a summer menu to a winter menu. The menu offered good descriptions of the teas, which made selecting another type on the fly much easier. I went with a tea called Murky Water despite its unappetizing name, which was great. It was from fruit and herbal tea list, and it was a flavorful rooibos, light, and fruity with tropical flavors like mango and pineapple. My friend picked a tea called Paris from the black tea list, which was also delicious, with the deep flavors of bergamot and vanilla. Despite the menu shortages, I thought the tea was excellent.

The tea came in cute teapots, with clever tea strainers on chains that could be pulled out easily to stop the tea from steeping. Tea leaves did flow through, and there were no strainers for our cups. They offered cream and sugar, but no sugar cubes (yes, this a petty gripe). 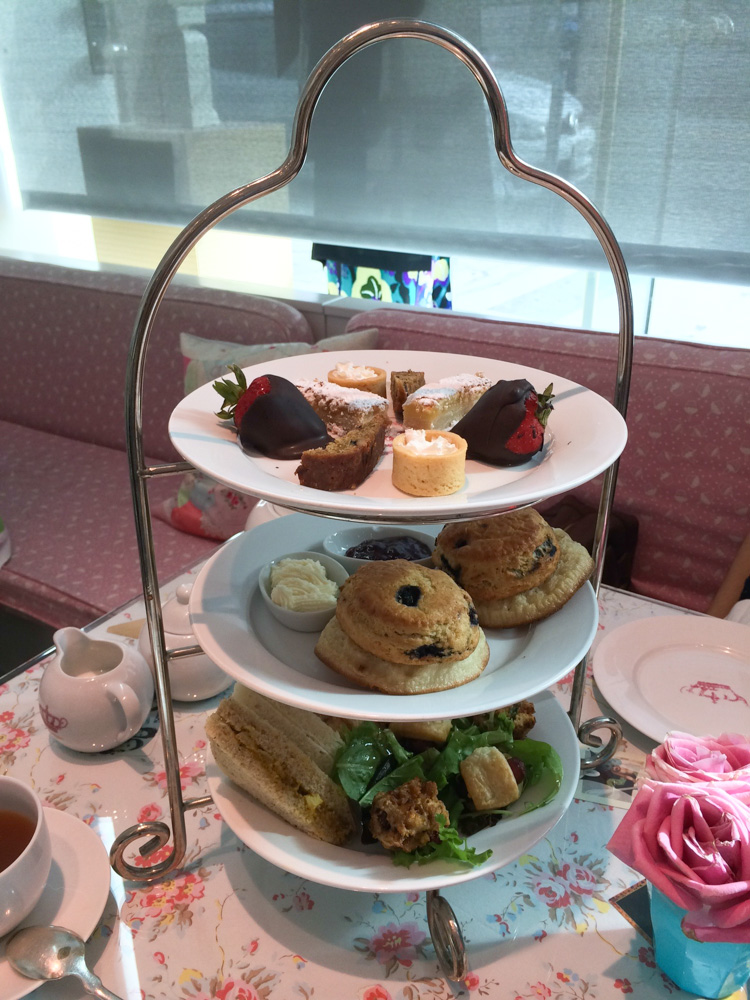 The courses of food arrived on a three-tiered display. Afternoon tea here comes with a set menu that changes each day.

The bottom tier held three types of crustless sandwiches, with a small half sandwich of each type for each of us. The sandwiches were chicken curry (the best), the classic cream cheese and cucumber (the cucumber to cheese ratio was off and it needed more cucumber) and the shrimp salad, which was my least favorite. These were okay, but the bread was a bit dry. Also on that tier were stuffing bites, a concept and flavor that I loved, as well as a sausage roll and a small salad, which were also just okay.

The middle tier held my favorite portion of the meal: blueberry raspberry scones and crumpets served with jam and clotted cream. The jam and clotted cream were delicious, and they were happy to give us more when we’d used the first set up. We were surprised to find they didn’t serve lemon curd, which is typical and listed on their menu.

The scones were different from typical scones, and not too dry. They were my favorite part of the meal. The crumpets were very good too, with great texture, and basically served as a tool for eating as much clotted cream and jam as possible.

On the top tier, we found our selection of miniature desserts, which were just okay (but maybe we were getting too full by then). The best part were the chocolate-covered strawberries. There were also tiny slivers of carrot cake, which were a bit dry but pretty good, and lemon bars and some kind of mousse tarts that were both too sweet for my taste.

If not for the food, visit for the experience. I’d absolutely return for some scones and crumpets with my tea and play queen for a day again. 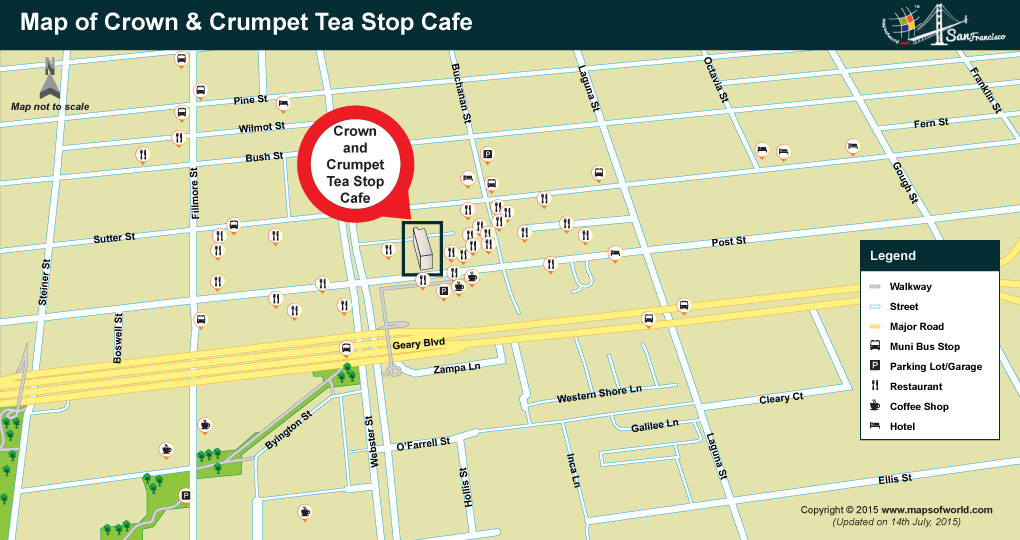