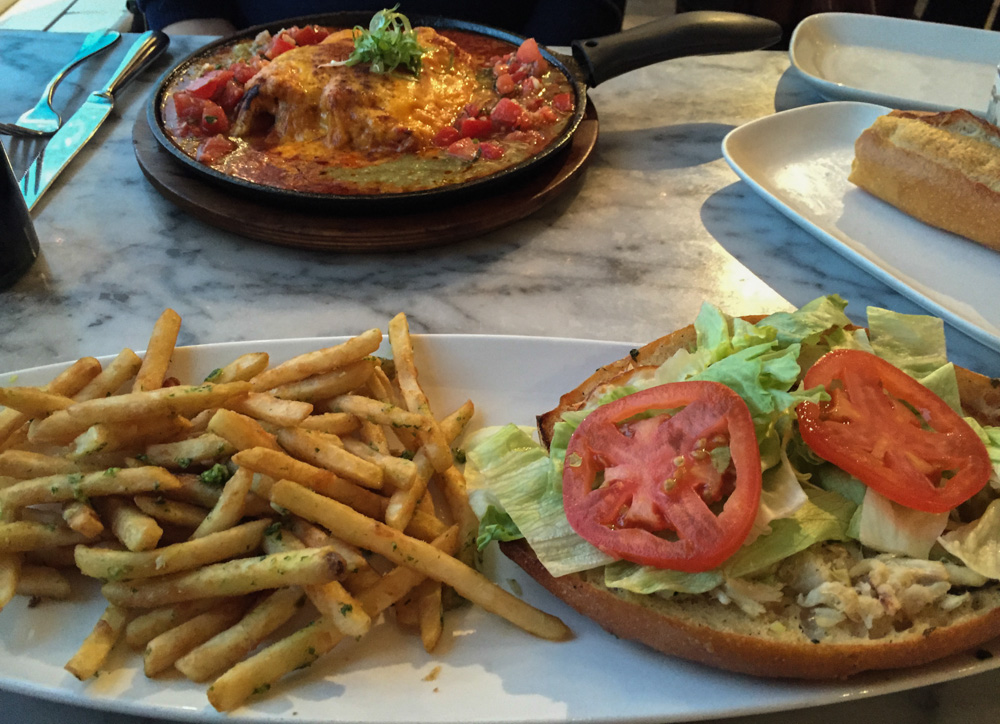 One of the higher-rated restaurants on Pier 39, the Crab House specializes in in Dungeness crab and offers great views of San Francisco and the Golden Gate Bridge. I don’t often think of Pier 39 as a place to go get great food (and most San Franciscans probably agree – even nearby Fisherman’s Wharf isn’t all that popular with locals), but I was already there and hungry and parked in the Pier 39 garage where it costs $9 per hour to park, and this place validates (1 hour free if you leave before 6 pm and 2 hours of free parking if you exit the garage after 6 pm), so we decided to give it a try.

They say that all of their crab dishes are made with fresh crab, and for crab lovers, you can’t beat having a whole crab, but we were in the mood to try something a little different while we watched the boats head out to the Bay. Overall, the Crab House is good option for a nice meal at Pier 39, with great views, and a bar with some fun sounding drinks like Fish Breath and Hot to Trout.

The Crab House is located on the upper level of Pier 39, midway down the pier on the left side.

The ambiance at the Crab House is nice and somewhat upscale. White subway tiles and white and grey marble keep the restaurant feeling bright and clean. Deep burgundy leather barstools give it a masculine vibe, while there was some minimal nautical themed décor, including fishing nets and some colorful fake crabs. The restaurant keeps the place from seeming stuffy by showing a sense of humor, and some of the staff wear shirts that read “got crab?” and which are also for sale. 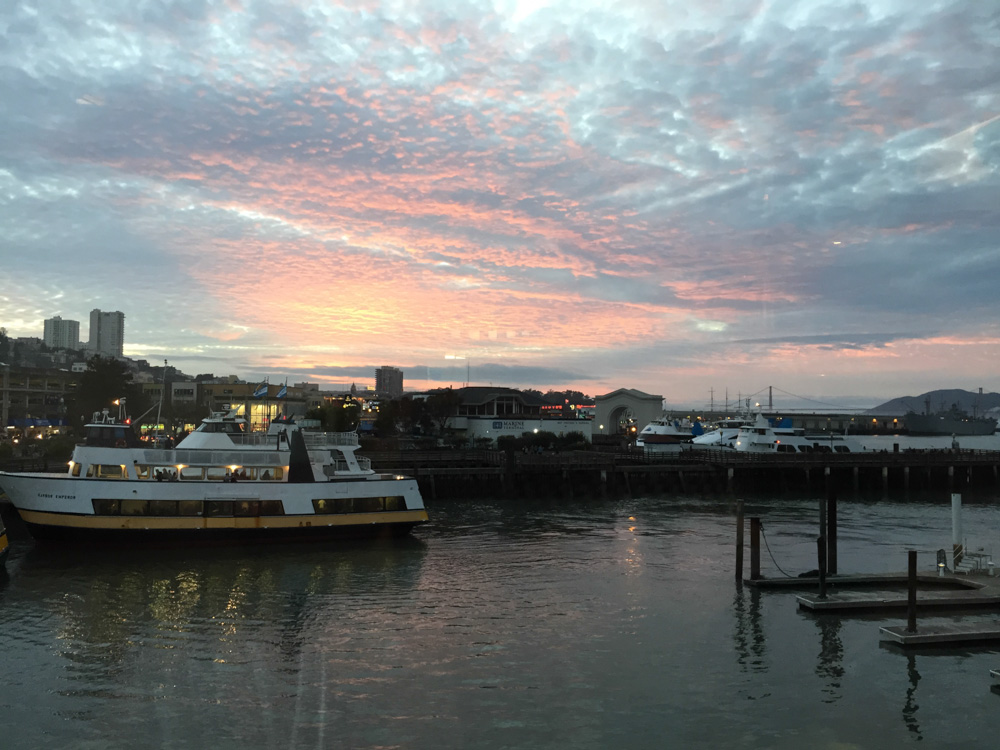 Sunset views over the bay

The real ambiance comes from the huge windows facing San Francisco and the Bay, including the Golden Gate Bridge, from which we watched a beautiful sunset.

We were seated immediately (though guests who arrived shortly after we did had a short wait) and right along the windows facing the bay. The place seemed to be managed impeccably.

Our waitress was great: incredibly friendly, helpful, and attentive. No complaints at all.

While the Crab House is one of the pricier restaurants on the Pier, it’s really not that overpriced (for being located in a major tourist attraction, at least). A whole crab costs for $45.95 (for over 2 lbs) while some entrees (sandwiches) start at $15 and head upwards of $20 for some of their pasta dishes. A glass of wine ranges from around $9 to $14, while most of their cocktails are about $12 and beers are $8.

One thing about their pricing that put me off was the note on the menu (even written on the large menu posted on the wall outside the restaurant) that read: 4.9% will be added to all checks, in part to help offset the cost of doing business & Government mandated expense.” Offset the cost of doing business? Shouldn’t your meal prices offset the cost of doing business, just like every other restaurant? After eating there, I saw that the 4.9% includes the San Francisco healthcare surcharge that all restaurants in the city add, which accounts for less than 2% of that. What the other nearly 3% goes to, I still do not know, but it does make me wonder why they stopped at 4.9%? Why not cover your costs with another 5% tax? Reading that sign almost made me walk away from this restaurant. At least list what those costs are that we’re covering with an extra tax or factor them into the meal prices like everyone else does. Less sleazy that way.

We weren’t in the mood for straight-up crab, unfortunately, so our waitress recommended a few other options, including the ones we finally settled on: the crab melt and the crab enchiladas. Each of these entrees was about $20 and the portions were fairly large (I had a whole enchilada left over for lunch the next day)

Both dishes also do one thing I thought, until this evening, was forbidden in the culinary world, which is combine seafood with cheese. Does this not apply to crab? After this meal, I’m still undecided. 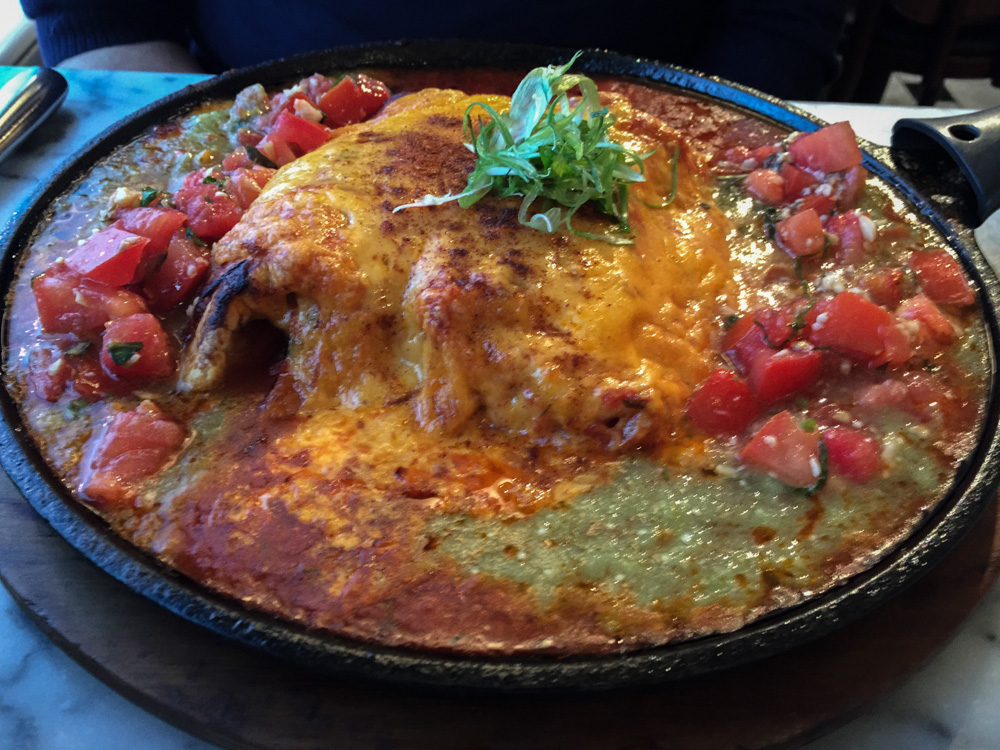 The crab melt was on some Sourdough bread that was the same loaf as the one they brought us as an appetizer (with no butter, but there was fortunately balsamic vinegar and olive oil on the table), except softer. The crab melt was light on the crab, with lettuce, tomatoes, and smoked mozzarella. The menu did not mention that the mozzarella would be smoked, and the smoky flavor of the mozzarella overpowered the light taste of the crab. That smoky flavor lingered and I was tasting it hours later.

The fries that accompanied the crab melt were very, very tasty. I will forever attempt to replicate them at home. They were battered and fried, leaving them super crunchy, and topped with chopped fresh garlic, parmesan, and parsley.

The enchiladas were presumably made with tortillas wrapped around crab meat, and were topped with a lot of cheddar cheese and some shredded chives (or something green). I’m guessing here, because the menu went for a minimalist style that offered no specifics. These were the only things that were remotely enchilada-like, because the tomato sauce was flavored with Italian seasonings, and tasted much more like a pasta sauce than enchilada sauce. That’s not to say that they weren’t very tasty, once I pushed it out of my mind that they were supposed to be enchiladas. I thought of the dish as lasagna instead, and my mouth was much less confused. The crab itself got a little lost in the mix of everything, but the flavors worked and I felt satisfied.

Neither of the entrees offered a lot of crab, but the crab that was there was tasty. With everything going on, it’s tough to say how fresh it was, but it was fine. If you want to get the most bang for your buck in terms of crab, your best bet is to stick with the whole (or half!) crab, but the other options are tasty and worth a try.

If you’re stuck on Pier 39 during a meal and can’t bring yourself to gorge on the fried seafood found everywhere else, the Crab House is a decent place to enjoy the views and eat some crab.