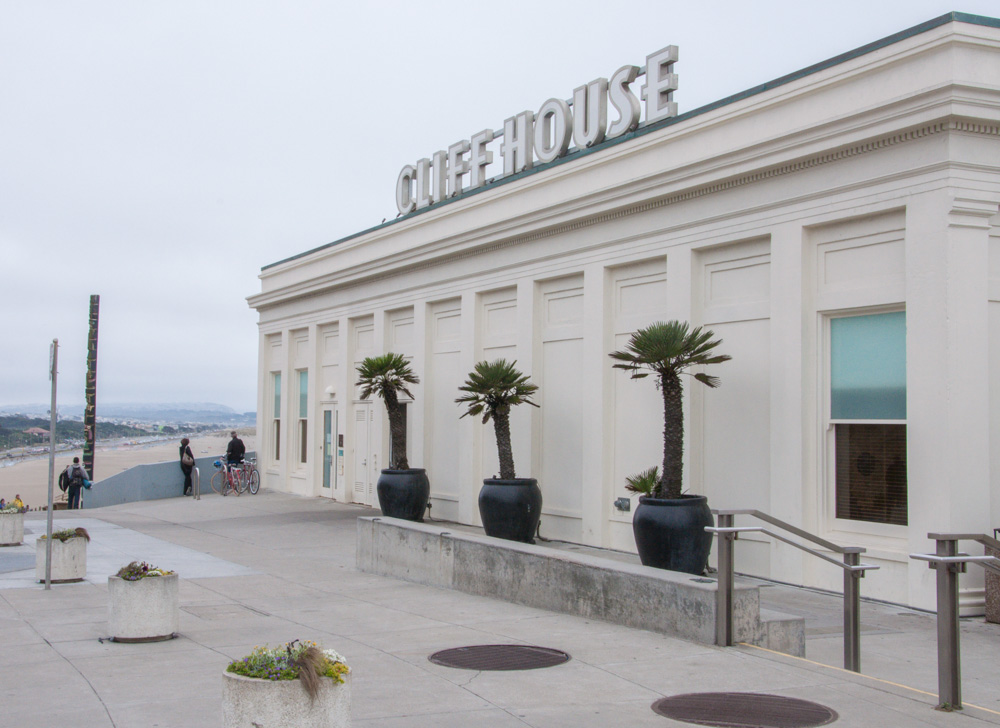 Cliff House Bistro Restaurant Review – One of San Francisco’s oldest and most famous restaurants, the Cliff House, is renowned more for its location than its food. As its name suggests, the Cliff House sits atop a cliff overlooking the ocean, offering great views of Seal Rocks, where the sea lions lounge when they’re not at Pier 39, the ruins of the Sutro Baths, and the surfers riding waves.

The Cliff House has been a fixture in San Francisco in some form since 1863, when the first restaurant was opened. It has had an eventful, even tumultuous history, fit for a soap opera. Its visitors have included presidents, including Teddy Roosevelt, and it has been completely rebuilt several times. The first version was popular among California’s prominent families and rich businessmen, and more people were drawn out after the formation of Golden Gate Park and road improvements. A schooner explosion on the rocks damaged the building in 1887, just a few years after Adolph Sutro bought it. It was repaired, but the Cliff House went up in flames on Christmas in 1894. Sutro rebuilt the Cliff House in 1896, in what became the most elaborate version of the restaurant: eight stories, dramatic spires, styled like a French chateau, clinging to the edge of the cliff. The Sutro Baths were also built that year, and with the addition of an inexpensive streetcar line to connect it to the city, the area thrived. After surviving the earthquake of 1906, the grand Cliff House again burned down in 1907.

In 1909, yet another Cliff House building was constructed, this time in a simple neoclassical style. The restaurant was shut down for several years, some because of Prohibition, but reopened in 1938 to accompany the nearby Playland, a boardwalk amusement park featuring roller coasters and shops. Since then, there have been some changes, including the most recent renovation, which was completed in 2004.

Today, the Cliff House is home to two restaurants: the more casual Bistro, located upstairs next to the Zinc Bar and Lounge, and Sutro’s, the upscale restaurant located downstairs. Outside, a back deck overlooks the rocks and also hosts a camera obscura, a feature that began with the 1896 Cliff House and was constructed in 1946, but it never seems to be open. In the front, a gift shop is filled with souvenirs, local art, and historic memorabilia.

The Cliff House Restaurant is situated on the western coast of San Francisco, on Point Lobos Avenue at the northern end of the Great Highway and the end of Geary. It’s just north of Ocean Beach, just south of the Sutro Bath and Lands end. It’s also not far from the western reaches of Golden Gate Park. There’s street parking in front of the restaurant as well as a parking lot up the hill and across the street. The restaurant also offers valet parking.

The Cliff House Restaurant is bright and open, with subtle beachy and classical vibes. The Bistro is located on the main floor, next to the Zinc Bar and Lounge, near the building’s entrance. A long bar covered in zinc spans the length of the Bistro, with a hand-carved back bar in dark wood that was made for the Parisian World’s Fair of 1890. Tables are situated all along the wall of windows that faces the ocean, making good use of that view – there’s not a bad seat in the house. On the walls are historic photos and memorabilia from throughout Cliff House history and about 200 signed black and white portraits of celebrities. I was seated next to a few legends: Shirley Temple, Humphrey Bogart, and Nicholas Cage.

The Bistro is casual, though the waitstaff wear dress shirts and ties. Because there are two restaurants, attire ranges from the casual tourist (recognizable for shorts despite the cold and drizzling morning and comfortable-looking shoes) to dressy, for the folks heading downstairs to a birthday brunch celebration.

Service at the Cliff House Bistro Restaurant was OK. There was a 45 minute wait for the Bistro, which is not unreasonable for brunch on a Sunday morning in San Francisco. They don’t do reservations. However, their estimated wait time was spot on, and they give you a pager so you can go look around the gift shop, or go out on the deck outside. There you can check out the Camera Obscura on the back deck or just enjoy the views and watch the surfers. Not a terrible way to spend 45 minutes.

Once we were seated, the server was fast but not particularly friendly. She wasn’t rude, but she did seem rushed. Before we left, I got to talking to one of the bussers about the Camera Obscura, and got some helpful information about how it’s run and how often it’s open.

Prices at the Bistro are extremely reasonable, for a fairly upscale place with good food. Most entrees on the breakfast and lunch menus are under $20, with the exception of a few seafood specialties, like the Cioppino ($33) or the crab salad sandwich ($31 ). Dinner starters are mostly in the $10-20 range and main Courses are in $20-40 range. The bar’s cocktail specials are also very reasonably priced, starting at $10, for drinks like the signature Ramos Fizz. 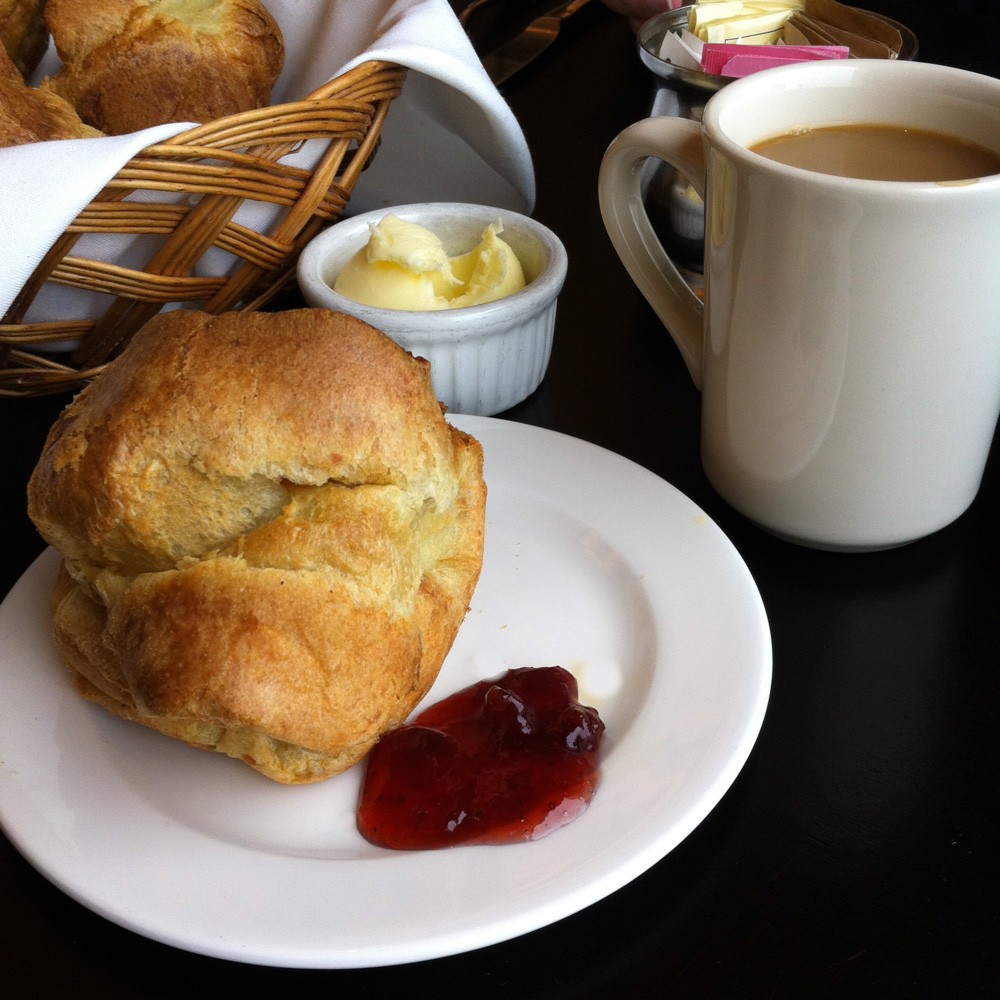 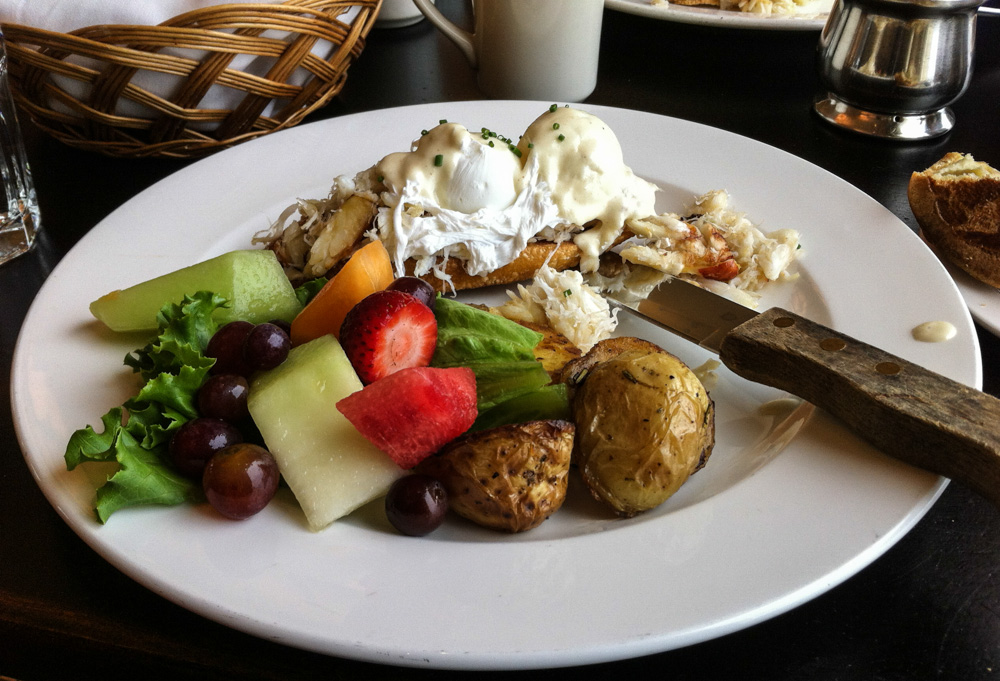 Sutro’s hosts a Sunday champagne brunch buffet every Sunday, but the Bistro also offers great views and a good breakfast menu, which the hostess explained was served until 3 pm. As good as the champagne sounded, we weren’t feeling fancy enough for a $59 brunch, so we stuck with the Bistro. On the menu are a variety of omelets and scrambles, and sourdough French toast, while the lunch menu features various seafood dishes like Cioppino and Dungeness crab or Bay Shrimp Louis, sandwiches and salads. Because I love breakfast and eggs Benedict, I went with the most touristy meal on the menu: Eggs San Francisco. It’s eggs Benedict with a local twist, switching out the Canadian bacon for Dungeness crab, using sourdough instead of an English muffin, and topped with a brandy cream sauce instead of Hollandaise. (As an aside, have you ever noticed how international a regular eggs Benedict sounds? It’s an American dish, so I guess that’s fitting.) I wasn’t sure about eating seafood for breakfast, but I went for it.

While we waited for our entrees, we were served the self-ascribed “Famous Cliff House Popovers” for $6.50. They were warm, light puffs of pastry, like cream puffs without the cream. Instead, there’s butter, marmalade, and strawberry jam. I didn’t even know I liked marmalade, but it was delicious on these popovers, which themselves were fantastic while warm, but declined as they cooled.

The Eggs San Francisco were accompanied by sides of rosemary roasted potatoes and fresh fruit. The sides were good but not memorable, aside from the fact that the fruit seemed too vibrant to the point where I wondered if it was artificially colored or if maybe I’m just used to low quality fruit. I still don’t have an answer to that, but the fruit tasted like regular fruit. Anyway, the Eggs San Francisco – those were excellent. The eggs were perfectly poached, although they left the stringy parts of the whites attached! That’s not a complaint, but it was strange. The crab was plentiful and delicious, and not too fishy for breakfast. The brandy sauce was a bit too mild, and I wished there was more sourdough for all the sauce and runny yolks. It was a really good meal and I would (and probably will) absolutely come back, and probably order the same thing. 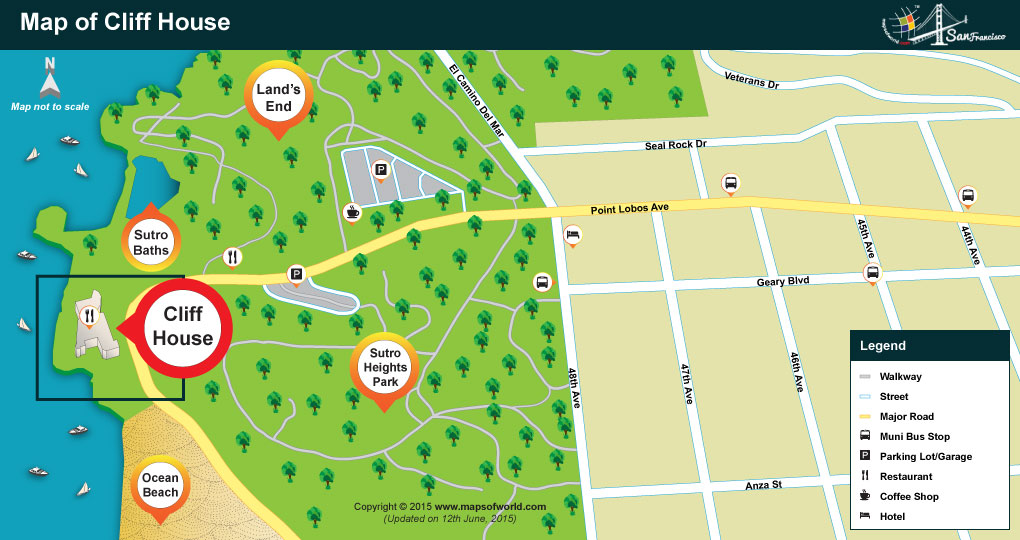