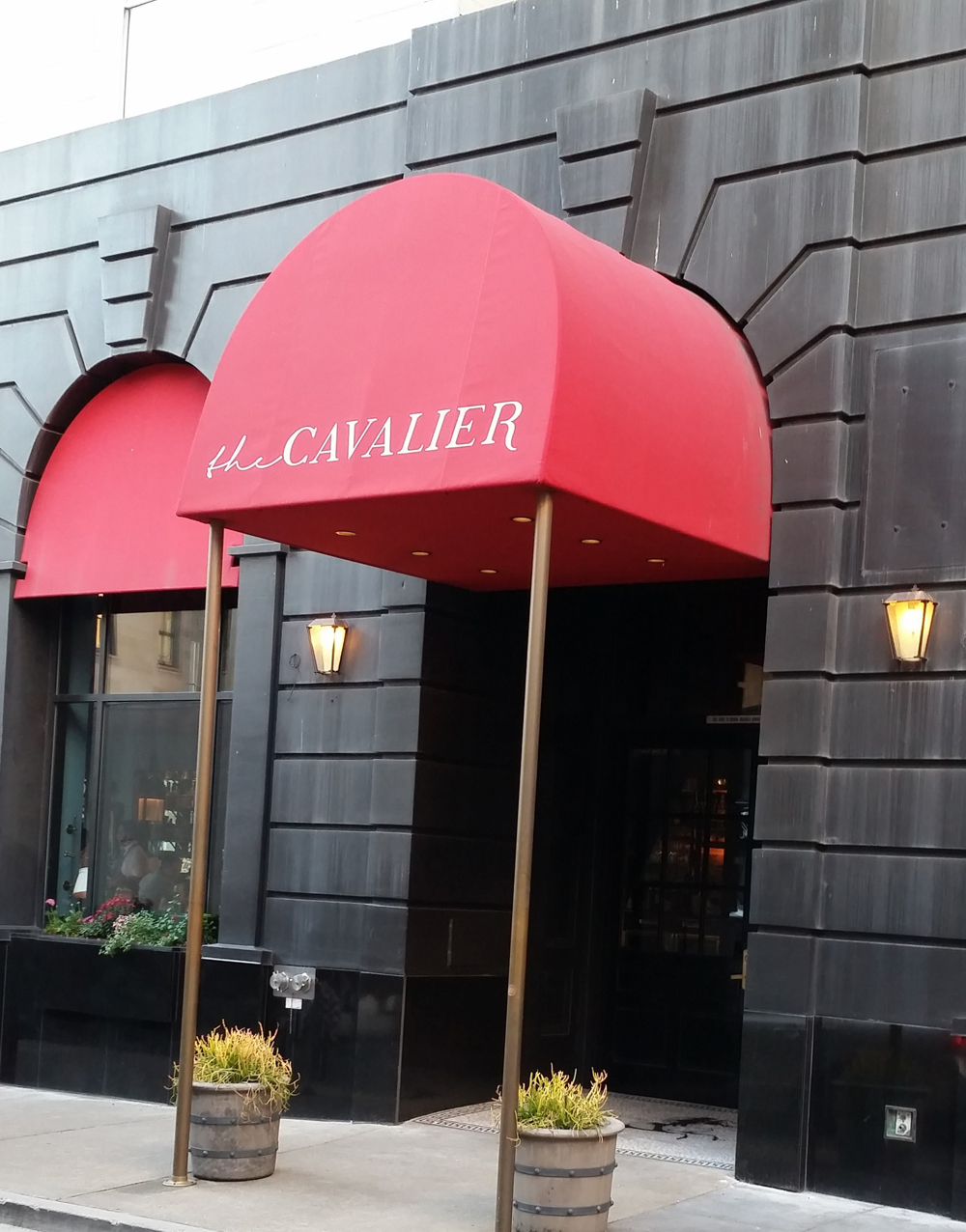 In the end, it’s always about the food. And unfortunately, that’s what took The Cavalier under. Despite getting almost every other thing right, the food simply was not that great.

The Hours:
BREAKFAST:
Daily beginning at 7 AM

Location: The Cavalier is on one of the many oddly-named side streets in San Francisco’s South of Market neighborhood. In this case, Jessie Street. It’s adjacent to the Hotel Zetta, and the Westfield Mall, so while the neighborhood isn’t exactly bad, it’s not completely great, either. There are a reasonable number of junkies and homeless types roaming around, and parking is in garages. You can also take BART. I would not recommend trying to find parking on your own.

The Ambiance: Very British pub – the menu describes it as “pub-inspired” or something. Plaid wallpaper, lots of little framed images stacked up on the walls, plaid wallpaper, brass statues and fitting, and so on. You know the drill. Done up to look like an American’s idea of a British pub, except a lot cleaner and more organized and more professional. 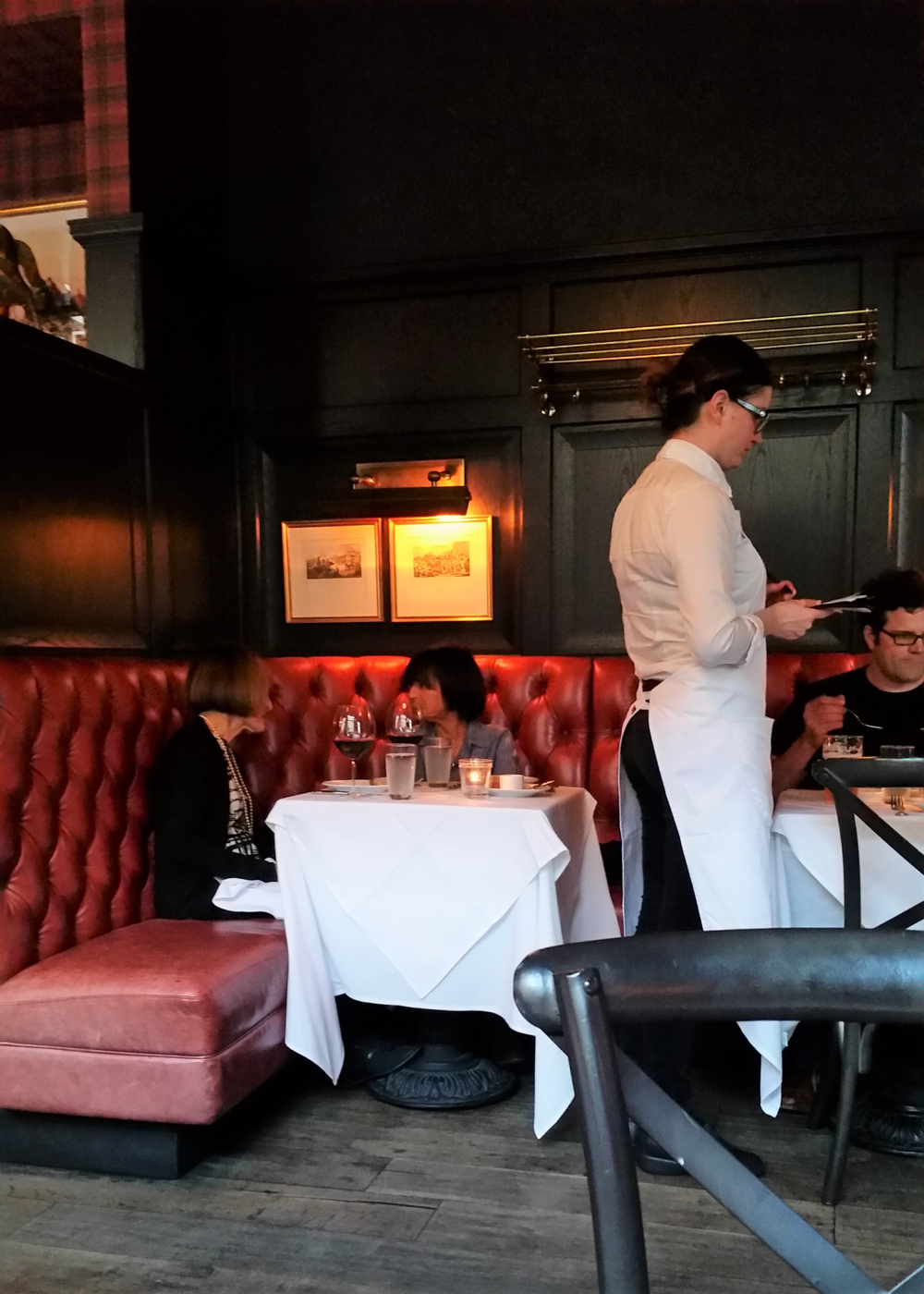 That being said, because of all the hard surfaces this place is really loud. When it’s full, conversation is a real challenge. The floor is tile, and all kinds of ambient noise just goes racketing around. The minute I walked in, I said to the server, “Loud!” and she knew exactly what I was talking about.

The Service: Terrific. Really friendly, professional, and organized. I honestly feel bad about the rest of this review because everyone was just nice enough, if you know what I mean. As I write this, I am fighting a cold, and so feeling slightly under the weather. I had also just endured a long, long meeting, and was tired, a little ill, and feeling somewhat out of sorts. The staff could not have been nicer.

They asked the right questions, kept checking on me, and so on. Everything happened right on schedule, and everyone was just faultlessly nice. It’s just that the food was mediocre. It confirmed every single cliché you’ve ever heard about British food.

The Price: Medium, for San Francisco. $58 for a beer, an appetizer, and dinner – but no dessert, for reasons I’ll get into later. 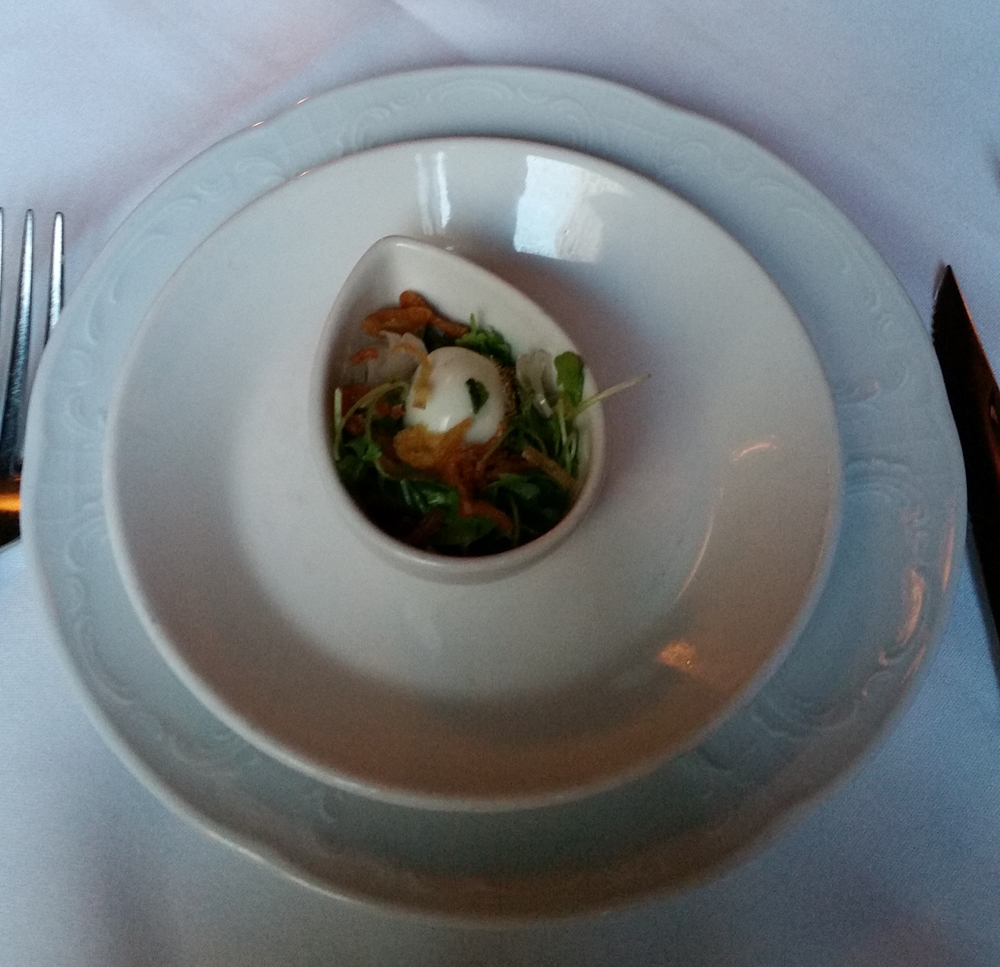 Aumuse bouche – a quali egg, in a little nest of greens.

Before I even started to eat, the server came by with a little aumuse bouche, which was great – a quali egg, in a little nest of greens and some kind of crunchy stuff. Although it was the size of a child’s marble (do kids even play with marbles anymore?) it was wonderful – a rich little egg, surrounded by spicy, crisp accents of veggies and savory.

That was the last decent thing I ate. The first appetizer I ordered was a scotched duck egg. Duck egg is considerably bigger and richer than a normal hen’s egg, and in this case, it’s battered in what was advertised as heritage sausage, rock shrimp and sauce gribiche. Sounds great, right? Wrong? It was perfectly cooked. The egg was soft-boiled as it should be, parked on a nice little bed of sauce on mint leaves I cut into it, a lovely little sensory experience. I put it in my mouth. And … nothing. No real flavor, no point of view, not much of anything. Just sort of this neutral, bland bready flavor of egg and breading, parked on a sauce that looked like it came out of a five-gallon restaurant vat of tartar sauce, maybe with some onions thrown in. Just not great. 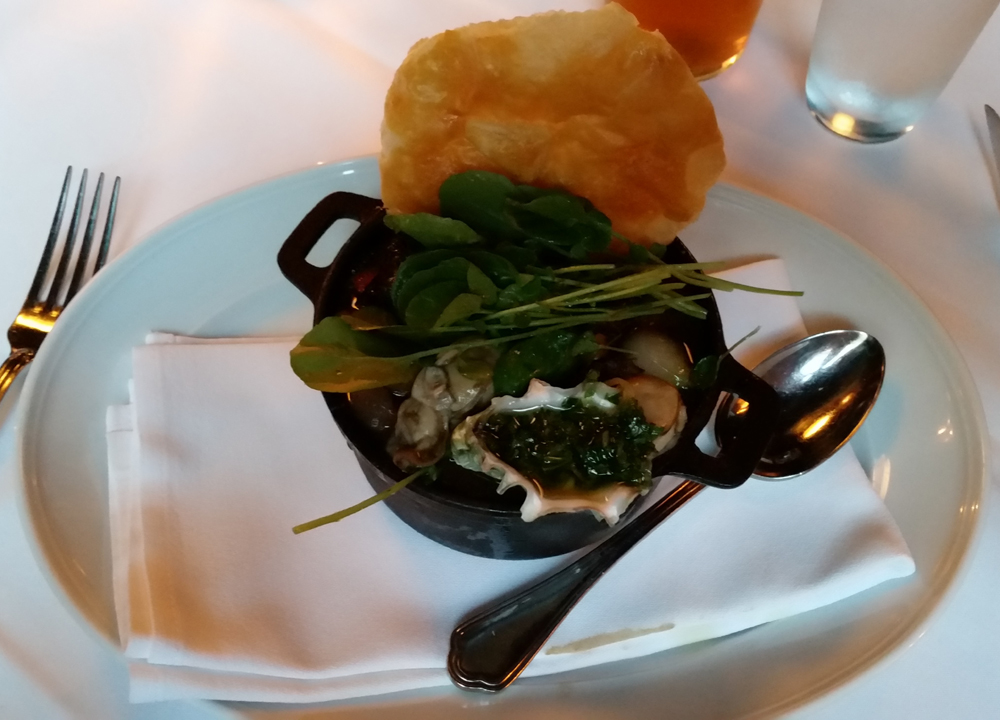 The entree was what was advertised as a “Cavalier Classic.” This was the Cavalier Pie, which consists of braised short ribs, oysters in their shells, seared hangar steak and gremolata. Sounds great, right? Sounds fantastic. Just right for a Sick Person. And again … nothing.

What showed up was an adorable little cast iron pot with lot of something in it. There were a LOT of pearl onions, which were undercooked. The oysters were there, and a few cubes of what I was guessing were the hangar steak. But this is a pie, people. This is supposed to be savory, rich, flavorful, nourishing – restorative. And this just … wasn’t. The entire thing pretty quickly became greyish mass of mysterious stuff that didn’t actually taste bad, but didn’t taste like much of anything. This pie was obviously a way for the kitchen to re-use whatever stuff hadn’t been eaten the evening before, and charge $28 for it, which it did. 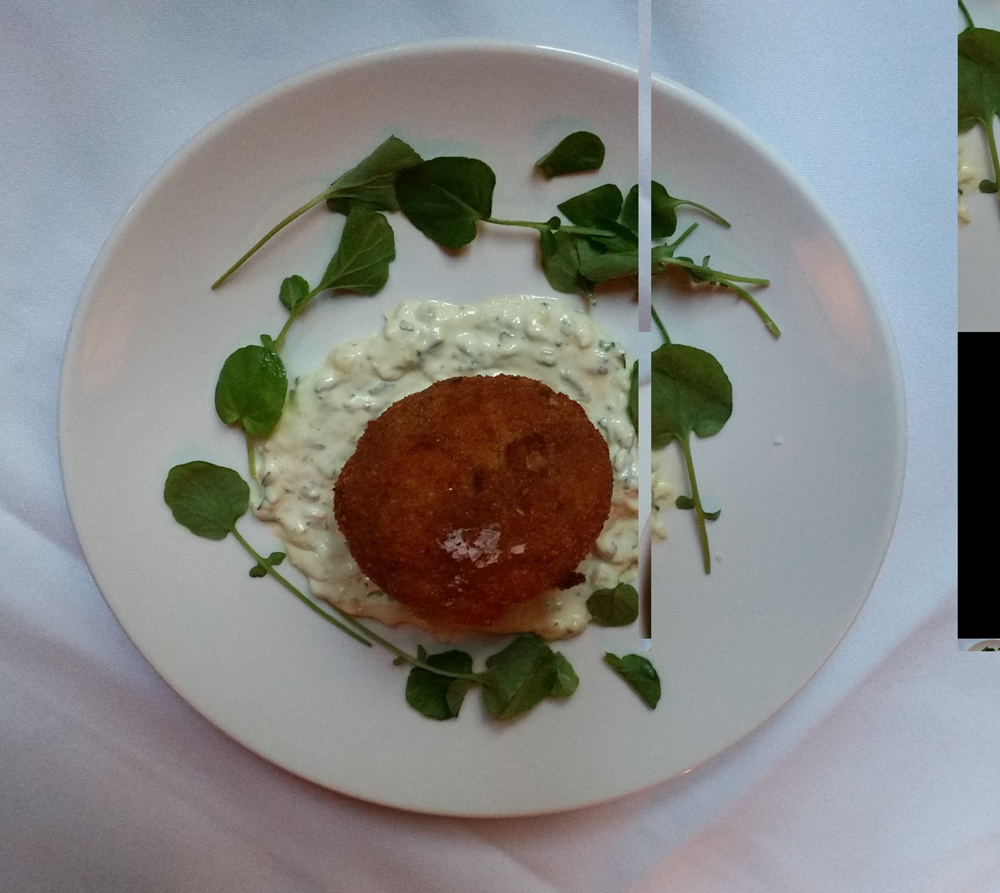 An appetizing dish to try

I kept taking bites of this stuff, holding it in my mouth, and trying to see what flavor arose? Was there something savory? Something rich? Complex? Nope. I got the following – greasy, floury, sticky, kind of gelatinous. Nothing awful, again, but I’ve had better stews and pies in college, served in the cafeteria. This just wasn’t that great. I didn’t finish it, and prepared to get my check and split.

And then they brought me a free beer. I couldn’t believe it. Of all the sleazy, underhanded things to do to someone who’s not too impressed with the food, and anxious to escape, maybe the worst is having someone show up with a free pint of beer, and saying “We heard you weren’t having a great day.” Well, I sure as hell am not having one now. Because despite being a nice place, despite a genuinely great service staff, and a nice ambience, the food I ate wasn’t that great, and I wouldn’t go there again. I just feel awful about it.